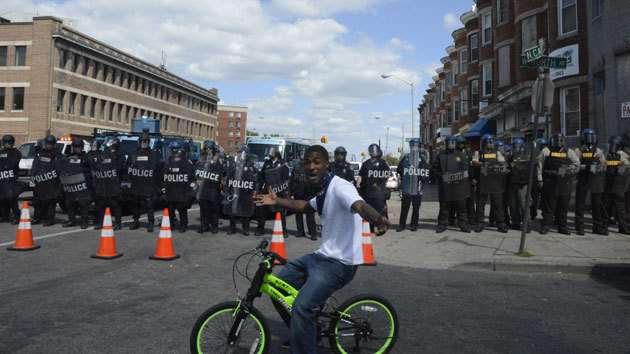 On a relatively quiet night in Baltimore, the Washington Post dropped a bombshell. According to a sealed court document, a witness alleged that Freddie Gray—whose April death has triggered days of protests in the city—may have been deliberately attempting to injure himself while in police custody:

A prisoner sharing a police transport van with Freddie Gray told investigators that he could hear Gray “banging against the walls” of the vehicle and believed that he “was intentionally trying to injure himself,” according to a police document obtained by The Washington Post.

The prisoner, who is currently in jail, was separated from Gray by a metal partition and could not see him. His statement is contained in an application for a search warrant, which is sealed by the court. The Post was given the document under the condition that the prisoner not be named because the person who provided it feared for the inmate’s safety.

But as WBAL’s Jayne Miller noted, the new exculpatory allegation appears to be at odds with the police department’s earlier narrative, as well as the timeline of events:

We have reported that when van stopped to pick up 2nd prisoner, sources say, Gray was unresponsive. No evidence banging head against van

And there’s another reason to be skeptical. Information that comes out of jails is notoriously unreliable, for the simple reason that anyone in jail has a real incentive to get out; cooperating with the people who determine when they get out is an obvious way to score points. This report from the Pew Charitable Trust walks through the conflicts in detail. According to the Innocence Project, 15 percent of wrongful convictions that are eventually overturned by DNA testing originally rested on information from a jailhouse informant. Two years ago in California, for instance, a federal court overturned the conviction of an alleged serial killer known as the “Skid Row Stabber” because the conviction rested on information from an inmate dismissed as a “habitual liar.”

Or maybe the witness in Baltimore is right—that happens too!—and what we thought we knew about the Freddie Gray case was wrong. But the department isn’t doing much to quiet the skeptics. It announced Wednesday that it will not make public the full results of its investigation into Gray’s death, “because if there is a decision to charge in any event by the state’s attorney’s office, the integrity of that investigation has to be protected.”