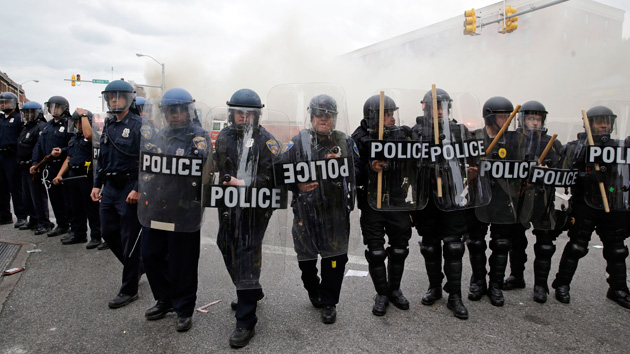 After Baltimore police and a crowd of teens clashed near the Mondawmin Mall in northwest Baltimore on Monday afternoon, news reports described the violence as a riot triggered by kids who had been itching for a fight all day. But in interviews with Mother Jones and other media outlets, teachers and parents maintain that police actions inflamed a tense-but-stable situation.

The funeral of Freddie Gray, a 25-year-old black man who died in police custody this month, had ended hours earlier at a nearby church. According to the Baltimore Sun, a call to “purge”—a reference to the 2013 dystopian film in which all crime is made legal for one night—circulated on social media among school-aged Baltimoreans that morning. The rumored plan—which was not traced to any specific person or group—was to assemble at the Mondawmin Mall at 3 p.m. and proceed down Pennsylvania Avenue toward downtown Baltimore. The Baltimore Police Department, which was aware of the “purge” call, prepared for the worst. Shortly before noon, the department issued a statement saying it had “received credible information that members of various gangs…have entered into a partnership to ‘take-out’ law enforcement officers.”

When school let out that afternoon, police were in the area equipped with full riot gear. According to eyewitnesses in the Mondawmin neighborhood, the police were stopping buses and forcing riders, including many students who were trying to get home, to disembark. Cops shut down the local subway stop. They also blockaded roads near the Mondawmin Mall and Frederick Douglass High School, which is across the street from the mall, and essentially corralled young people in the area. That is, they did not allow the after-school crowd to disperse.

Meghann Harris, a teacher at a nearby school, described on Facebook what happened:

Police were forcing buses to stop and unload all their passengers. Then, [Frederick Douglass High School] students, in huge herds, were trying to leave on various buses but couldn’t catch any because they were all shut down. No kids were yet around except about 20, who looked like they were waiting for police to do something. The cops, on the other hand, were in full riot gear, marching toward any small social clique of students…It looked as if there were hundreds of cops.

The kids were “standing around in groups of 3-4,” Harris said in a Facebook message to Mother Jones. “They weren’t doing anything. No rock throwing, nothing…The cops started marching toward groups of kids who were just milling about.”

A teacher at Douglass High School, who asked not to be identified, tells a similar story: “When school was winding down, many students were leaving early with their parents or of their own accord.” Those who didn’t depart early, she says, were stranded. Many of the students still at school at that point, she notes, wanted to get out of the area and avoid any Purge-like violence. Some were requesting rides home from teachers. But by now, it was difficult to leave the neighborhood. “I rode with another teacher home,” this teacher recalls, “and we had to route our travel around the police in riot gear blocking the road…The majority of my students thought what was going to happen was stupid or were frightened at the idea. Very few seemed to want to participate in ‘the purge.'”

A parent who picked up his children from a nearby elementary school, says via Twitter, “The kids stood across from the police and looked like they were asking them ‘why can’t we get on the buses’ but the police were just gazing…Majority of those kids aren’t from around that neighborhood. They NEED those buses and trains in order to get home.” He continued: “If they would’ve let them children go home, yesterday wouldn’t have even turned out like that.”

Meg Gibson, another Baltimore teacher, described a similar scene to Gawker: “The riot police were already at the bus stop on the other side of the mall, turning buses that transport the students away, not allowing students to board. They were waiting for the kids…Those kids were set up, they were treated like criminals before the first brick was thrown.” With police unloading busses, and with the nearby metro station shut down, there were few ways for students to clear out.

Several eyewitnesses in the area that afternoon say that police seemed to arrive at Mondawmin anticipating mobs and violence—prior to any looting. At 3:01 p.m., the Baltimore Police Department posted on its Facebook page: “There is a group of juveniles in the area of Mondawmin Mall. Expect traffic delays in the area.” But many of the kids, according to eyewitnesses, were stuck there because of police actions.

The Baltimore Police Department did not respond to requests for comment.

Around 3:30, the police reported that juveniles had begun to throw bottles and bricks. Fifteen minutes later, the police department noted that one of its officers had been injured. After that the violence escalated, and rioters started looting the Mondawmin Mall, and Baltimore was in for a long night of trouble and violence. But as the event is reviewed and investigated, an important question warrants attention: What might have happened had the police not prevented students from leaving the area? Did the department’s own actions increase the chances of conflict?

As Meghann Harris put it, “if I were a Douglas student that just got trapped in the middle of a minefield BY cops without any way to get home and completely in harm’s way, I’d be ready to pop off, too.”

On social media, eyewitnesses chronicled the dramatic police presence before the rioting began:

On Twitter, Baltimore residents vented their frustration with the situation.

Mondawmin Mall is where lots of students catch the bus, when you shut down MTA how the heck they gonna get home? @BaltimorePolice

These are not gangs. These are children. You close Mondawnin, close the metro stop. And wonder why children are just “around” Mondawnin.