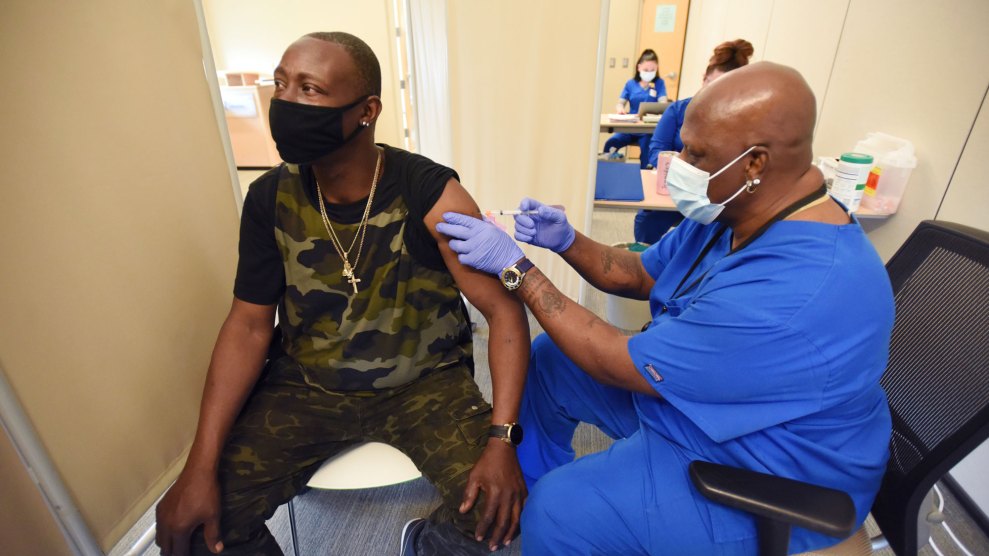 Michigan is in the midst of a brutal surge of COVID-19 infections. ICUs are nearing capacity, and thousands of infections are hitting each day. The B.1.1.7 variant has driven this surge: The more transmissible variant accounts for 99 percent of new cases in the state. Though the increase in new cases seems to have slowed in the last few days, the state still leads the country in new cases per capita in the last week, and Centers for Disease Control and Prevention head Rochelle Walensky recently said the state should impose restrictions to curtail the virus’ spread once again—a move the state’s governor, Gretchen Whitmer, has resisted.

As the state races to vaccinate residents and reopen its economy and schools, it appears that, like the beginning of the pandemic, Black communities across generations are getting infected and dying of COVID at higher rates than their white peers, according to a Mother Jones analysis of state data. Likely because older residents received the early share of vaccinations, this surge has unevenly afflicted younger residents—young Black men and women in particular.

The latest outbreak is especially acute among children and young adults. A Mother Jones analysis found that in Michigan, residents between 20 and 39 years old account for the highest case rates statewide, and people under 19 years old have contracted COVID at a rate higher than any other time during the pandemic.

Younger Black residents are also dying at disproportionately higher rates than white residents, taking years of life from an entire generation of Black Michigan residents. In the last year, Black Michiganders between 20 and 39 years old account for around 17 percent of the state’s Black residents but 44 percent of deaths. It reflects a startling national trend that Black and Latino Americans throughout the pandemic have died of COVID at younger ages than their white peers.

Because of the surge, in mid-April, Governor Whitmer called on schools to pause in-person learning and youth sports and pleaded with residents to avoid eating indoors at restaurants and bars. Her power to impose stricter restrictions was limited, thanks to a state Supreme Court ruling last October curtailing her executive authority.

On NBC’s Meet the Press this week, Whitmer conceded that she lacked the “exact same tools” she had a year earlier after being sued by Republicans. “At the end of the day this is going to come down to whether or not everyone does their part,” Whitmer said on Sunday.

But for some cities, the race for vaccinations and personal responsibility plea only goes so far. Dr. Lawrence Reynolds, a pediatrician in Flint who has been chief health adviser to Flint mayor Sheldon Neeley since last March, points to the state’s dedication to “home rule,” the notion that every school district and city government operates on its own, even as the state offers resources and direction. Reynolds, who sits on the Greater Flint Coronavirus Taskforce on Racial Inequities, saw Flint’s high coronavirus burden as an example of how home rule can perpetuate segregation and the unequal allocation of resources. That, along with Republican resistance against Whitmer, creates a “recipe for moving backward and not responding appropriately” to the pandemic, he added.

Flint is in Genessee County, which has a daily case rate of 89.2 per 100,000 people—the second-highest rate of all metropolitan areas in the United States over the last two weeks, according to the New York Times. During the pandemic’s early days, Black Flint residents, who make up 53 percent of the city’s population, were nearly four times more likely to get infected by COVID than their white peers and six times more likely to die, according to county data provided to Mother Jones.

By the end of last summer, through a concerted effort to eliminate testing barriers, expand community testing sites, impose a moratorium on water shutoffs, and leverage pre-existing networks of community groups, activists, church leaders, public health officials, philanthropists, and business leaders for aid, among other initiatives, the city managed to close that gap in infections and deaths between white and Black residents. So did the rest of the state: An interim report from the state’s Coronavirus Task Force on Racial Disparities noted that in March and April 2020, Black residents averaged 176 new confirmed cases for every million residents per day—a stark departure from 39 per day for white residents.

By September and October, the trend nearly flipped: Black residents accounted for 59 cases per million while white residents made up 130 per million. Nationally, although disparities in COVID infections and deaths among communities have narrowed over time, Black, Latino, Native American, and Pacific Islander people are still dying of COVID at at least twice the rate of white people when adjusted for age, according to APM Research Lab.

But sadly, much of that progress has been undermined in the most recent surge. As COVID sweeps through cities shaped by pre-existing inequities and political division, it takes advantage of structurally unequal systems that disproportionately afflict communities of color, many of whom are so-called essential workers who risk exposure in ways their peers don’t. The trajectory in Flint and the surrounding county is no different. Even the vaccine rollout has unfolded unequally. Though Black residents account for 14 percent of the state’s population, just 8 percent of all vaccinated people in Michigan so far are Black as of April 12. White people, who make up 80 percent of the population, account for 79 percent of vaccinated Michiganders.*

Debra Furr-Holden, a Flint epidemiologist and professor of Public Health at Michigan State University, told Mother Jones that the state’s decision to reopen in February, just as the B.1.1.7 variant collided with the state’s hopes for returning to normalcy, was a “big mistake.”

“It’s a really unfortunate state of affairs—despite people’s desire to return to business as usual, and what many are calling the new normal, we weren’t ready,” she says. “We didn’t give enough time for vaccinations to outpace spread and the impact of variants and communities. So now we are where we are. I’m pretty sure we ruined summer.”

This article has been updated to correct a mischaracterization of the racial breakdown of fully vaccinated Michigan residents.