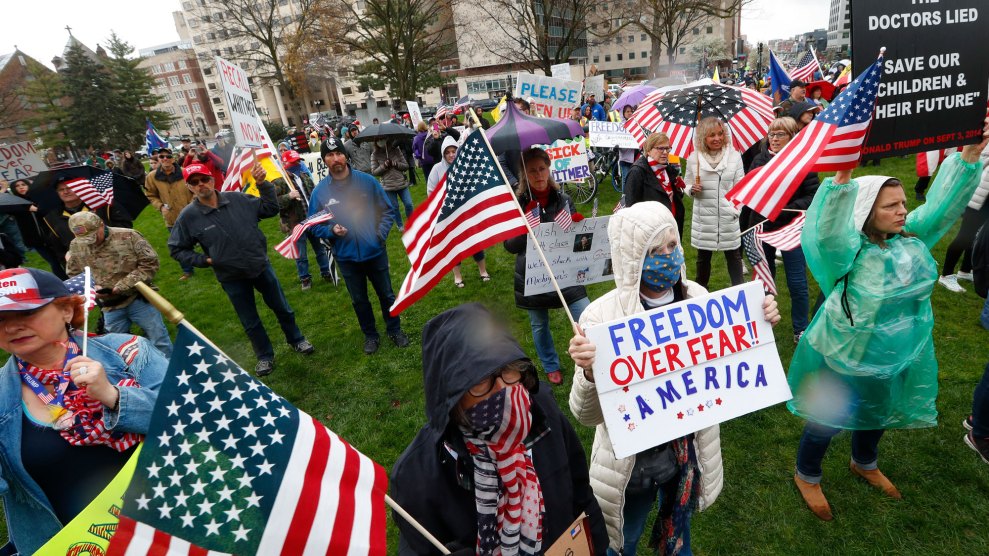 Three days later, as the nation was fixated on small but raucous right-wing protests defying shelter-in-place orders, a group of protesters in Atlanta, organized by the Georgia Coalition 2 Save Lives, rode in cars and a dozen hearses from a funeral home to the state Capitol and held a mock funeral. The coalition, made up of lawyers, faith leaders, and civil rights groups, wanted to draw attention to what public health experts see as a likely consequence of moving too quickly: a deadly surge in COVID cases.

When Hall asked whether Bottoms was “surprised by those who have decided it is worth the risk to reopen,” the mayor told the talk show host: “It is so surprising to me that people have such a disregard for the science and the data, especially when you look at the African American community, where there is a barbershop and hair salon on every single corner.”

Bottoms was evoking one of the central juxtapositions of the pandemic in the United States: White people are demanding their lives back while Black people are losing theirs altogether. According to a recent poll by Civis Analytics, just under 70 percent of Americans who oppose lockdowns are white workers who have not lost a job in the pandemic. The New York Times recently characterized the question of reopening as a dilemma between “job or health,” but the pairing begs the question at either end: Whose jobs? Whose health?

In fact, a closer look at the data suggests the dubious freedom to work and shop in a plague is being won in places where Black people are most vulnerable. Of the 15 states with the widest disparities between the Black share of the population and the Black share of COVID deaths, nine have reopened or are reopening soon: Missouri, Kansas, South Carolina, Alabama, Georgia, Mississippi, Tennessee, and North Carolina. Of those, seven are run by Republican governors. Just one state with a Republican governor, Maryland, has refused to reopen.

By now the disproportionate effects of the coronavirus on Black people have been well-documented. Recently, in a snapshot of 14 states, the CDC found that Black people accounted for 18 percent of the sample’s population but 33 percent of hospitalizations for COVID-19. In Georgia, where 34 percent of people are Black, the CDC found that Black people made up 83 percent of hospitalizations for COVID-19. State data shows that they also account for half the deaths, though the Atlanta Journal-Constitution has reported that Georgia might be undercounting its deaths.

The reopenings are proceeding on top of these asymmetries. (For this analysis, we used data collected from The COVID Racial Data Tracker, as well as from the Centers for Disease Control and Prevention.) In Missouri, where Black people account for 12 percent of the state’s population but 39 percent of COVID fatalities, Republican Gov. Mike Parsons let the stay-at-home order expire this week. He visited businesses that reopened without a mask, saying simply that he “chose not to” wear one.

In Alabama, Gov. Kay Ivey transitioned to a “safer at home'” model that allowed, in the first phase, beaches and some businesses with capacity restrictions to reopen. At the same time, some sheriffs in Alabama refused to enforce the stay-at-home order in a state where Black folks account for 27 percent of the state’s population and 46 percent of COVID fatalities.

In South Carolina, where Black people also account for 27 percent of the population but 48 percent of COVID deaths, Gov. Henry McMaster insisted on rolling back restrictions on businesses, noting that the goal “was to cause the most damage possible to the virus while doing the least possible damage…to our businesses.”

In nine reopening states, “freedom” is being built on the back of Black vulnerability. On Tuesday, President Trump, touring a Honeywell mask manufacturing facility in Arizona without a mask, acknowledged that some people would be hurt by the unfreezing of their state economies. “Will some people be affected badly? Yes,” Trump said. “But we have to get our country open and we have to get it open soon.” Whether Trump knows or cares, there is no great mystery who those “some people” will be. As the president continued his tour, fate seemed to acknowledge the shrugging ghoulishness of his comment. From somewhere in the plant, speakers bellowed the gravelly sounds of “Live and Let Die.”