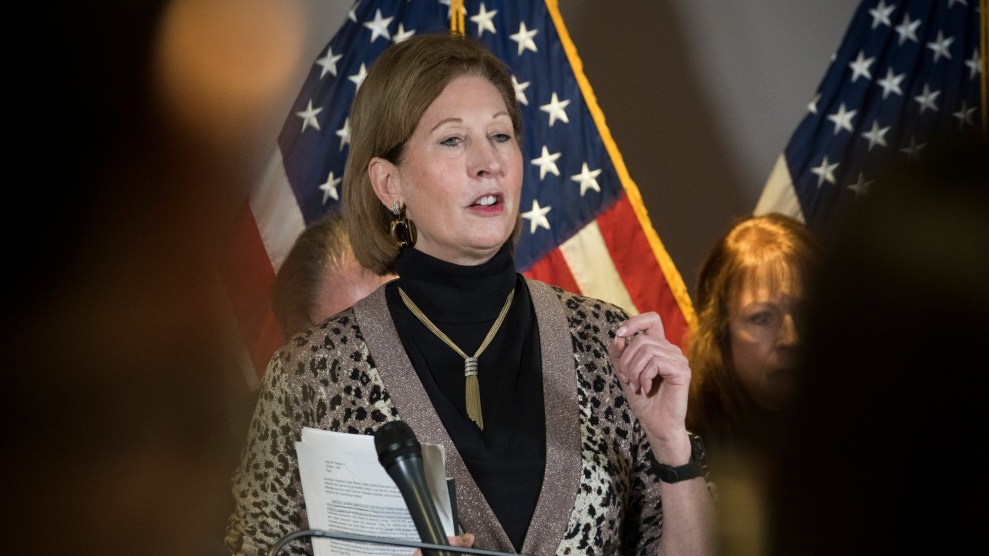 It’s been nearly a month since Joe Biden was declared the winner of the 2020 presidential election by major media outlets and more than a week since the General Services Administration informed the president-elect that his team could start the transition process. But none of that has had any effect on the lawyers fighting on behalf of Donald Trump to overturn the election results in key swing states.

In a particularly deranged and conspiracy-filled press conference held in Georgia on Wednesday by attorney Lin Wood and Sidney Powell, a former member of Trump’s legal team, the two repeatedly affirmed, without citing any evidence, that Trump not only won Georgia but most other states, including California. They wildly described a massive (and fictitious) international conspiracy involving Dominion voting systems, China, George Soros, the Deep State, and the late Venezuelan president Hugo Chávez collaborating to steal the election from the president.

“It’s 1776 in America again,” Wood, an attorney and Trump ally who is currently representing Kyle Rittenhouse, the teenager who shot killed unarmed protesters in Kenosha, Wisconsin, shouted with a preacher’s conviction to the crowd gathered in a North Atlanta suburb. He then shouted for George Soros to “get out of our country,” adding “you’re not going to sell our votes to China!” Powell falsely claimed that Georgia’s election was stolen from the president because voting machines manufactured by Dominion Voting systems were rigged to give Biden more votes. She added, without any evidence, that the recount of Georgia’s votes was also a sham and that both state and local election officials have been physically destroying ballots marked for Trump in order to get rid of evidence of voter fraud. Georgia certified its votes on November 20 with backing of its Republican Gov. Brian Kemp and election officials, including Secretary of State Brad Raffensperger, who is also a Republican. Both Wood and Powell called for Kemp and Raffensberger to resign as the crowd chanted for them to be locked up, with Wood bizarrely claiming that Kemp is a foreign agent working on behalf of China. Raffensberger, along with his wife, has received death threats in recent days.

But the November 3 election wasn’t the only one they called a sham. Both Wood and Powell also falsely claimed that the upcoming runoffs for Georgia’s two US Senate seats were currently being rigged and called on supporters at the rally to not vote. “I would encourage all Georgians to make it known that you will not vote at all unless your vote is secure,” Powell said. “There should not be a runoff. Certainly not on Dominion machines.”

This would all be extremely laughable if it wasn’t so dangerous. The people enabling Trump’s denial of reality—that he won the 2020 election by a landslide and that a rigged election is keeping him from serving a second term—are now inciting violence against people who are just doing their job. And the president himself is eating it up: In a lengthy, meandering  speech posted onto his Facebook page Wednesday afternoon , Trump said that, “as president I have no higher duty than to defend the laws of the Constitution of the United States, that is why I am determined to protect our election system, which is now under coordinated assault and siege.” A statement par for course for a president who has spent four years trying to warp reality with disinformation.