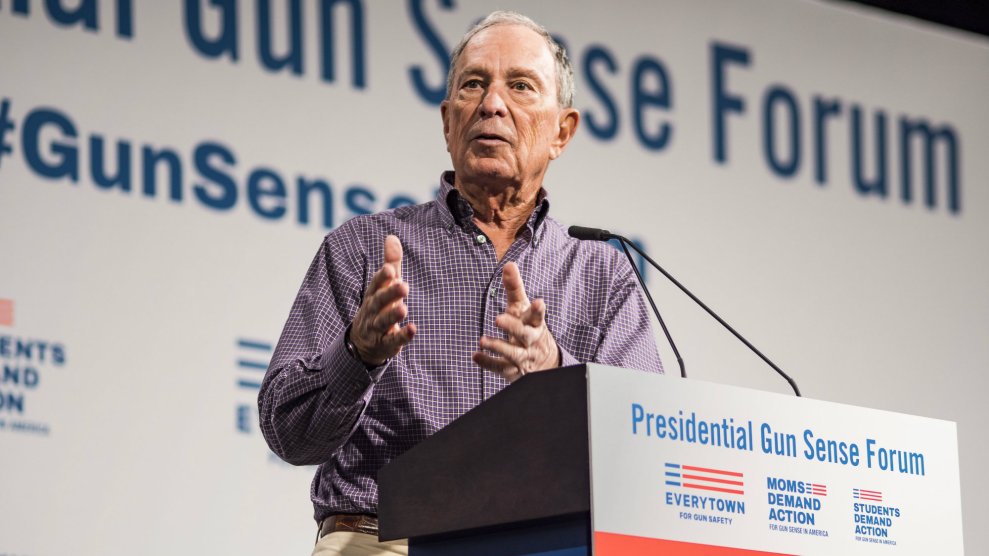 Let’s run the stats: Billionaire politician Michael Bloomberg has, so far, participated in two debates, appeared on zero ballots, and spent close to half a billion dollars on his campaign—ensuring his name is thrust upon nearly every American who turns on a TV or uses the internet. Thanks to that massive spending, recent polls have him hovering around third place nationally. But the first true test of Bloomberg’s grand, expensive political experiment will happen on Tuesday, when his name will appear on a ballot for the first time in 14 states’ primary elections.

In Virginia, where there isn’t a clear favorite, Bloomberg has one advantage over all other Democratic candidates: The National Rifle Association really, really hates him.

Ever since Virginia’s state legislature flipped blue in November—Democrats took full control of the state government for the first time in more than 25 years—Bloomberg has been public enemy number one for the NRA and the state’s extremely vocal gun rights contingent. As the co-founder and chief financier of Everytown for Gun Safety and Moms Demand Action, Bloomberg spent millions in 2019 to help Democrats, who largely campaigned on a platform of strengthening gun laws. Numerous polls ahead of that election showed gun control was the top issue among voters. Rep. Dan Helmer, a Democrat who beat a Republican incumbent in November, made gun reform central to his campaign and told me the issue was “overwhelmingly” the top concern among voters he spoke with. And since the new Democratic majority took over, they’ve followed through on their campaign promises.

In the months after the election, gun rights advocates have directed ire at Bloomberg every chance they get. At a massive Second Amendment rally I covered in Richmond in January, I spotted more than a dozen anti-Bloomberg signs. At a Bloomberg campaign event I went to in early February—where the candidate wasn’t even present—gun rights activists disrupted the event, interrupting speakers and heckling attendees. The NRA has gone on the offensive against Bloomberg since he launched his campaign, issuing dire press releases and social media warnings about the billionaire.

Bloomberg wants to disarm Americans and he will – with unlimited amounts of money to get it done.

This is the truth: Mike bought the House, he bought Virginia, and now he wants to buy the White House.

STAND and FIGHT. Our votes are more powerful than his billions. #DemDebate pic.twitter.com/nUVPt8XOxh

Stephen Farnsworth, a political science professor at the University of Mary Washington in Fredericksburg, thinks Bloomberg’s unique reputation in the state could certainly help him on Tuesday, but maintains that the state is still up for grabs. “What [Bloomberg] has done historically in Virginia, in terms of supporting candidates who favored gun control, has built up some IOUs among Virginia Democrats,” he says. Polling for the state has been all over the place in recent weeks; a Monmouth University poll last week had Bernie Sanders, Joe Biden, and Bloomberg essentially tied for first place, but a poll released Friday by Wason Center for Public Policy shows Biden edging out a victory on Tuesday.

“Virginia Democrats have shown a pattern of greater willingness to support moderate Democrats than Democratic electorates in many other states,” Farnsworth adds, explaining how Biden or Bloomberg could win in Virginia. “And that’s one of the reasons why Bloomberg has been wise to spend a lot of money in Virginia.”

Spend a lot of money, he has: Bloomberg has opened seven campaign offices and hired 80 staff members there, spent millions on ads in the state, and donated $160,000 to the state’s Democratic Party. “If you’re a moderate Democrat, you would look at Virginia as a more appealing place to be than some of the other Super Tuesday states,” Farnsworth says. “And that’s one of the reasons why Bloomberg has been wise to spend a lot of money in Virginia.”