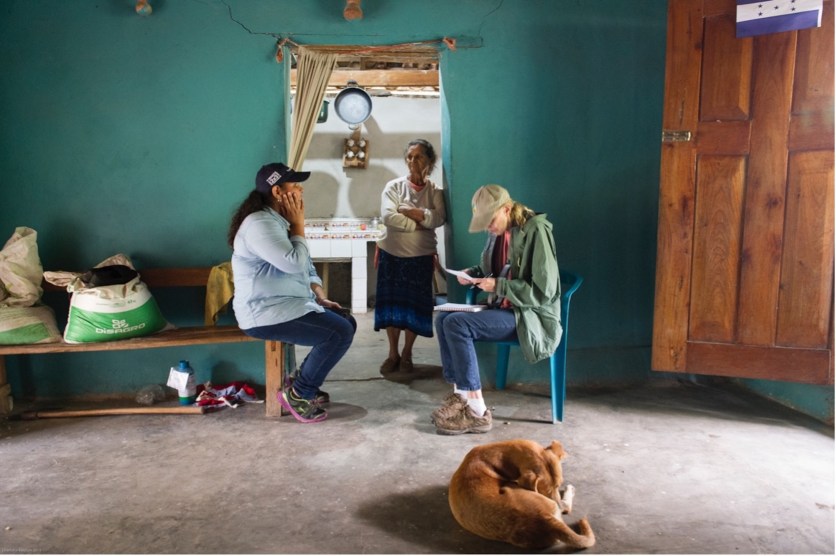 
This content was written by Randi Druzin and paid for by Cool Effect; it was not written by and does not necessarily reflect the views of Mother Jones’ editorial staff. See our advertising guidelines to learn more.

Dee Lawrence and her family traveled to rural Honduras in 2002 to translate for and help support health care providers who were caring for residents in the wake of a devastating hurricane. The trip ended up transforming the lives of residents and Lawrence herself, and countless others.

She and her family encountered many women and children suffering from respiratory illnesses and, in time, identified one source of the problem: traditional woodburning stoves filling homes with toxic smoke.

Determined to help, Lawrence launched an initiative that identified a stove that would suit the local cooking style, and oversaw the testing, construction, and installation of efficient stoves in rural Honduran homes. They improved the quality of indoor air and burned less wood, reducing the amount of carbon dioxide emissions.

“We never set out to create a carbon project. We set out to solve a health problem,” Lawrence says. “Luckily, the key to that solution also ended up having real benefits to the planet.”

The project’s success and clear, tangible impact inspired Lawrence to create a nonprofit called Cool Effect with her husband, Richard, in 2015. Since then, Cool Effect has been helping individuals, businesses, and other organizations offset carbon emissions by connecting them with high-quality projects worldwide that reduce carbon and benefit local communities—an undertaking that’s even more critical as the climate crisis worsens.

Cool Effect reviews accredited projects that are verified by one of the international carbon standards such as Verra, Gold Standard, or Climate Action Reserve. If the project also meets Cool Effect’s exacting standards, the carbon credits become available for purchase by the general public or through strategic partnerships involving businesses and universities.

The clean cookstoves being installed in rural Honduran homes use half the amount of wood that traditional woodburning stoves use and cook faster. Thanks to an innovative thermal design, these stoves ventilate toxic smoke out of the building and reduce the circulation of particulate matter in the home by about 50 percent.

The cookstoves have improved health in more than 215,000 rural households so far, and the initiative has contributed to the local economy—the stoves are built from locally sourced cement or adobe bricks. The project has created at least 20 micro-enterprises and 170 jobs.

It’s all overseen by Proyecto Mirador Foundation, and it’s the first project to be vetted and featured by Cool Effect, measurably improving the planet by preventing about 2 million metric tonnes of carbon dioxide and equivalent gases from being released. It will reportedly save miles of forests and reduce carbon emissions by about 3 tonnes per stove every year.

“Many of Cool Effect’s supporters have chosen to fund this project because they are emotionally connected to the livelihood and health benefits it offers women and families in Honduras,” Lawrence says.

Cool Effect’s projects have seen powerful results around the world, including in Africa, where forest is being lost at four times the rate of the global average thanks largely to population growth and increased demand for fuelwood.

In 2016, after its rigorous analysis and vetting process, Cool Effect decided to support a project that is restoring and protecting 420,000 hectares of forests and grasslands in Kenya. The project was established through a collaboration by local Masai communities, landowners, public agencies, nonprofits, and private entities.

The project will prevent emissions equivalent to more than 20 million metric tonnes of carbon dioxide over the next 30 years, Cool Effect reports. By improving habitat and interaction between the local community and wildlife, the project contributes to improved biodiversity and provides the community with financial and technical resources to make agricultural practices sustainable, productive, and economically viable for the long term. The impact has been profound.

At a recent community-outreach event, local people, including members of the Masai tribe, told the project’s field communications leader, Agnes Nailentai, that they’d benefited from the project’s employment opportunities and initiatives that save livestock from traveling long distances to find water. Masai elders expressed a desire to implement more restoration projects to reverse the impact of soil erosion and other problems.

“This experience made me realize the project is achieving better conservation practices,” Nailentai says.

Last year, Cool Effect started selling carbon credits to help fund a project in Indonesia, where the peatlands are critical ecosystems, to help stabilize water flow, curb forest fires, enrich soil nutrients, and provide clean water. They store 90 percent of carbon dioxide from the atmosphere with stocks below the ground making up to 20 times the amount of carbon stored in trees and vegetation. They’re also home to many animal species, including endangered ones.

This carbon, when cleared, drained, and burned to make way for plantations, is released into the atmosphere as carbon dioxide along with other greenhouse gases whose cumulative harm is compounded by illegal logging, hunting, palm oil production, fires, and land clearing.

As recently as six years ago, the area was slated to be converted to an Acacia plantation to produce paper. The land-clearing process would have released carbon stored within the peatlands and forested areas.

But that didn’t happen. Instead, a Jakarta-based company launched an initiative to promote sustainable livelihood, ecosystem restoration, and conservation. It now collaborates with people in 34 villages to manage almost 160,000 hectares of land, focusing on community development, forest conservation, and carbon trading. The area is one of the largest intact peat-swamp forests in Indonesia and reduces 7.5 million tonnes of carbon dioxide each year.

“The project management is thoughtful, experienced, and focused on ecosystem preservation as well as providing opportunity, environmental training, education, and sustainable livelihoods for residents,” Lawrence says.

As with all Cool Effect projects, the environmental benefits of the initiative have been verified by an international standard against one or more approved methodologies.

Lawrence is not surprised that Cool Effect has become a trusted source when it comes to helping individuals, businesses, and other organizations meet their sustainability goals. Each day, she and the team are dedicated to helping teach the value of carbon-offset projects and continuing their obligation to provide high-integrity credits—a commitment that Cool Effect refers to as Carbon Done Correctly. “The most highly effective, high-quality carbon reduction projects are those that demonstrate a true carbon benefit, pricing transparency, and secondary benefits in the communities where the projects are based.” she says.

Cool Effect dedicates this article to the memory of Sid Yadav, Cool Effect Director Of Project Research. Sid oversaw the rigorous vetting and selection process for all carbon reduction projects supported on Cool Effect’s platform since its inception. He also monitored ongoing project activities and made on-site project evaluations. In addition to bringing lengthy carbon verification expertise, Sid was passionate about creating a better life and future for those communities around the world who need it most.