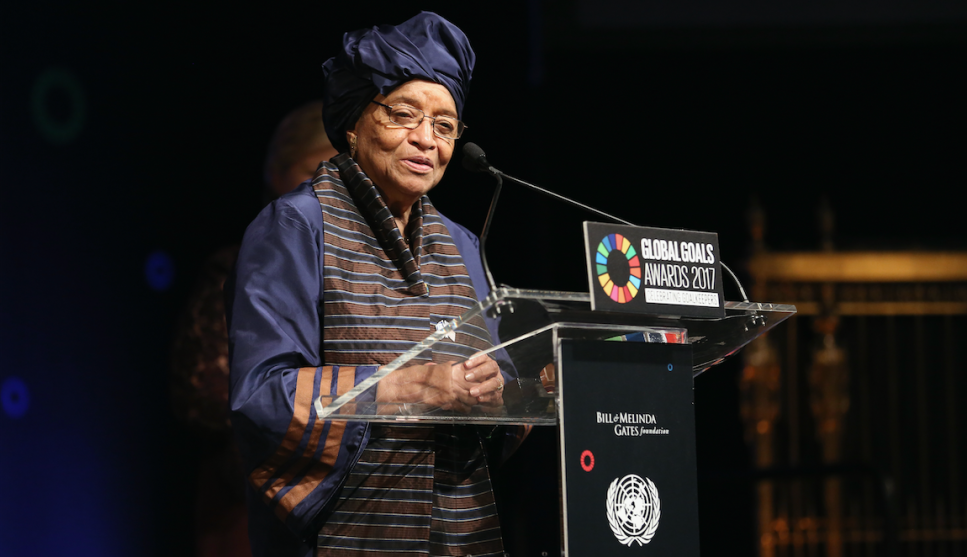 Almost a year ago, before the pandemic, Ellen Johnson Sirleaf wrote a letter to a law student and women’s rights activist, Mmonbeydo Nadine Joah, in the collection “Letters to Young People Who Inspire Us,” also headlined “What Prominent Leaders Want Youth Activists to Know.” The former Liberian president, Nobel Peace Prize winner, and first woman elected head of state of an African country turns 82 today. Her letter appeared in Time magazine alongside ones from Winnie Byanyima, the aeronautical engineer and executive director of the UN’s HIV/AIDS program, and several other leaders.

Read it in full, with special attention to the letter’s echoes across moments of national reckonings. Johnson Sirleaf led reconciliation and recovery after the civil war and did what she could to build anti-corruption coalitions. Criticism and controversies haven’t spared her, but her pathbreaking work, historic gains, and countless accomplishments are no less resonant in her letter than in her life:

I write to you not only as your former President, but as a grandmother and a fellow Liberian woman.

Your passion to fight for women’s rights, your desire to stand up for others, and your determination to become a lawyer are qualities that I admire.

The world may seem a dark and challenging place. Every day we hear stories from our women and women across the world of rape, abuse, discrimination. We fear the climate crisis and see its destructive reality across the globe. We see the rule of law under attack from those meant to uphold it.

But there is so much to be hopeful about and young women like you give me hope. When I was your age, it was uncommon for a woman to be a lawyer let alone a President. I remember how proud I felt when Angie Brooks became the first female lawyer in Liberia in 1953 and then later the first female judge to be admitted to the Supreme Court.

We need more women in the justice sector. Not only as lawyers and judges but as police officers, prison staff, and as paralegals. Justice is the thread that binds all of the Sustainable Development Goals and we will not be able to achieve our goals for gender equality, education, or health without it.

We need to mentor and support girls and to listen to their voices and dreams. Our women’s movements must not only represent the interests and views of the elite. We need to make sure all women are included, especially those on the margins such as women with disabilities or women from rural areas. We need to stop working in silos and come together…I hope that young women like you can draw strength and solidarity from the spirit of that declaration and continue the fight for justice.

It may seem like a time of push back for women’s rights. A time when we need to make sure the rights women won over many generations are not diluted or destroyed. But it is also a time when our collective voice is strong—just look at the #WeAreUnprotected campaign in Liberia and global movements such as #MeToo #Nopiwouma and #NiUnaMenos. It is a time when fearless young women such as Malala, Greta, and yourself speak truth to power and shame leaders for their inaction.

Do not feel weak or discouraged when opposition comes. Don’t be afraid to dream boldly. To dream what seems impossible. As the feminist writer Audre Lorde reminds us, “When I dare to be powerful, to use my strength in the service of my vision, then it becomes less and less important whether I am afraid.”

Let us know how you view her legacy, and her birthday, at recharge@motherjones.com.