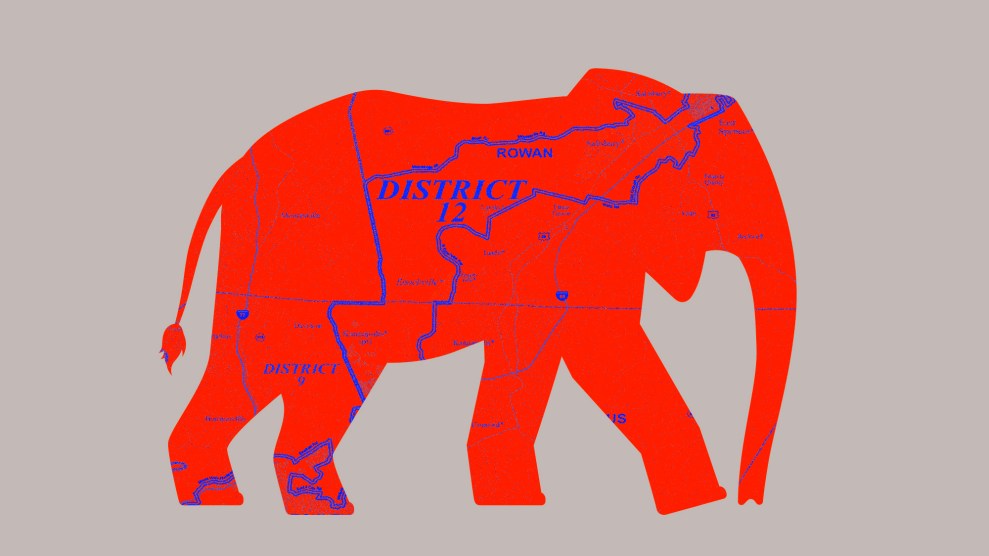 On Wednesday the Supreme Court will hear a bombshell case, Moore v. Harper, that will have enormous ramifications for future elections. The outcome will determine whether state legislatures—many of which are heavily gerrymandered and disproportionately controlled by Republicans—will be granted near king-like status to draw new redistricting maps and pass restrictive voting laws with little to no review by state courts or other entities.

That the Supreme Court is finally weighing in on the so-called “independent state legislature” theory is a testament to the power of the right-wing Federalist Society and its influential co-chairman, Leonard Leo, who have worked for years to place a notion that was once considered fringe and extreme before the highest court in the land.

The independent state legislature theory was first raised during the 2000 election in Florida, when the Supreme Court stopped the Florida Supreme Court from ordering a full recount in the state, which handed the presidency to George W. Bush. In a concurring opinion, Chief Justice William Rehnquist, joined by Justices Clarence Thomas and Antonin Scalia, wrote that “this inquiry does not imply a disrespect for state courts but rather a respect for the constitutionally prescribed role of state legislatures.”

After Leonard Leo and his allies stacked the courts with radical conservative judges, they now want to use the courts to engineer Republican dominance of state and national politics.

The independent legislature issue lay dormant until 2015, when it was rejected by the Supreme Court in a decision upholding Arizona’s independent redistricting commission. It was widely considered by legal scholars to be far outside the mainstream, even among high-profile judicial conservatives. That changed in 2020 with the founding of the Honest Elections Project, which became part of a sprawling network of nonprofit organizations advised by Leo, who oversaw the right-wing capture of the federal courts and recently received a $1.6 billion donation to a group he controls, which will only increase his influence.

The Honest Elections Project has aggressively litigated against efforts by state officials to make voting more accessible during the pandemic and has filed more than a dozen amicus briefs supporting a wide range of voting restrictions, according to research by the watchdog group Accountable.US. That includes supporting a ban on mail ballot drop boxes in Wisconsin, a prohibition on allowing voters to receive food and water while waiting in line in Georgia, and a law disenfranchising people with past felony convictions in Florida who have not paid off all fines and fees resulting from their sentences. After Leo and his allies stacked the courts with radical conservative judges, they now want to use the courts to engineer Republican dominance of state and national politics.

In the run-up to the 2020 election, the Honest Elections Project seized on a case brought by Pennsylvania Republicans, who asked the US Supreme Court to overturn a state court decision allowing mail-in ballots to be counted if they arrived up to three days after the election so long as they were post-marked by Election Day. Such a ruling would have invalidated thousands of mail-in ballots cast disproportionately by Democrats during the pandemic, potentially flipping the state to Donald Trump.

The Honest Elections Project asked the Supreme Court to go further still. In its own supporting brief, the group said the court should not just side with Pennsylvania Republicans but rule that state legislatures could not be constrained in election disputes by state courts or state constitutions, which often contained more expansive protections for voting rights than the US Constitution. “State legislatures are vested with plenary authority that cannot be divested by state constitution to determine the times, places, and manner of presidential and congressional elections,” the group wrote. “This case provides a timely opportunity to put these questions to rest.”

A week before Amy Coney Barrett was confirmed to the bench, the Supreme Court deadlocked 4 to 4, upholding the Pennsylvania Supreme Court ruling. But in a flurry of litigation from states including Pennsylvania and Wisconsin on the eve of the election, the court’s four conservative justices endorsed the independent state legislature theory advanced by the Honest Elections Project. As Justice Neil Gorsuch wrote: “the Constitution provides that state legislatures—not federal judges, not state judges, not state governors, not other state officials—bear primary responsibility for setting election rules.”

In the days following the 2020 election, the Trump campaign and its allies peddled a more extreme version of this claim during a full-court press to overturn the results. A lawsuit by Texas seeking to nullify the election in Georgia, Michigan, Wisconsin, and Pennsylvania alleged that “government officials…usurped their legislatures’ authority and unconstitutionally revised their state’s election statutes.” Trump lawyer John Eastman’s memo to Vice President Mike Pence urging him to reject Electoral College votes cast for Joe Biden opened with the argument that the Constitution “assigns to the legislatures of the states the plenary power to determine the manner for choosing presidential electors.”

Courts and policymakers rejected these arguments in 2020. But in 2021, North Carolina legislative Republicans passed a heavily gerrymandered new congressional map in 2021 that would have given the GOP between 71 to 78 percent of seats in a state where Trump got 49.9 percent of the vote in 2020. The North Carolina Supreme Court struck down the plan and ordered independent experts to draw new congressional lines; in 2022 that led to an even split in the state’s US House delegation. North Carolina Republicans appealed to the Supreme Court; the Moore case ostensibly concerns whether state courts and state constitutions can constrain the legislature’s ability to draw congressional districts, but Republicans are asking for far more sweeping powers. “The power to regulate federal elections lies with state legislatures exclusively,” North Carolina Republicans argue.

That would eviscerate checks and balances in state government, give state legislatures enormous power to rig state and national politics, and could even embolden legislatures to attempt to overturn future election results, like Trump wanted them to do in 2020 but now with the veneer of legality. “If state legislatures are unconstrained by gubernatorial vetoes, popular referendums, state courts, state constitutions, those efforts to push the envelope will go even further and will open the door to even more extreme anti-democratic shenanigans,” says Eliza Sweren-Becker, counsel for the Brennan Center for Justice, which filed a brief opposing the independent state legislature theory.

Given that four conservative justices (Gorsuch, Alito, Thomas, and Brett Kavanaugh), have already signaled their support for this theory, that leaves Amy Coney Barrett as the swing justice. That’s an ominous sign for voting rights, given her extreme record during her short tenure on the court and how reliably she has sided with the conservative majority in nearly every major case.

The Honest Elections Project argues in its Moore brief that the independent state legislature theory simply honors “the founders’ choice,” but there’s little historical support for the idea that the founders intended to give state legislatures unfettered authority to control the rules of federal elections. In fact, the US Constitution was conceived in large part to counter the power of the states after the disastrous early tenure of the Articles of Confederation. And one of the key historical documents cited by North Carolina to support its position is widely considered to be a forgery. Nonetheless, the Honest Elections Project argues that the independent state legislature theory “constrains state courts and executives from ignoring or invalidating clear laws passed by the legislature.”

Other parts of the Federalist Society network have amplified this view (although one of the group’s co-founders wrote a pointed brief opposing the theory). A supporting brief by Eastman, who continues to be a member of the group despite being a central figure in federal and state investigations into Trump’s attempt to overthrow the election, asserts that state legislatures cannot be overruled by any other state actor when they regular federal elections. “When performing federal functions, the legislatures of the several states…cannot be constrained by anything in state law or even a state constitution to the contrary,” says his brief filed for the Claremont Institute.

In practice, this would insulate heavily gerrymandered state legislatures from any kind of political accountability. Governors could play no role in the redistricting process, independent redistricting commissions would be invalidated in states like Arizona and California, and laws passed via ballot initiative, such as ranked choice voting in Alaska and Election Day registration in Michigan, would be overturned. Hundreds of state laws could be invalidated and different systems of voting would need to be set up for state and federal elections. “By obliterating large swaths of existing law regulating elections, the independent state legislature theory would create chaos in American elections,” the Brennan Center argues.

The arguments in favor of the independent state legislature theory are all the more remarkable because just three years earlier, in another redistricting case from North Carolina, the Supreme Court ruled that partisan gerrymandering couldn’t be challenged in federal court, but pointed to state courts and constitutions as a remedy. The ruling did not “condemn complaints about districting to echo into a void,” wrote Chief Justice John Roberts in Rucho v. Common Cause, noting that “provisions in state statutes and state constitutions can provide standards and guidance for state courts to apply” when addressing partisan gerrymandering.

If the Supreme Court were to overturn Rucho in such a short span of time, that would make it impossible for voters to challenge partisan gerrymandering in state or federal court. Freed from any checks on their authority and granted sweeping new powers from the nation’s highest court, state legislatures would likely be emboldened to take even more brazen steps to undermine voting rights, including potentially trying to overturn election results they don’t like. As the Brennan Center’s Sweren-Becker notes, in 2020 “Eastman was trying to point to the purportedly plenary power of state legislatures to mask an attempt to overturn an election.”

The one bright spot may be the results of the 2022 elections, where Democrats picked up control of four new state legislative chambers—the Michigan House and Senate, Minnesota Senate, and Pennsylvania House—removing the ability of Republicans to rig the political process in critical swing states.

Before the midterms, according to the States Project, which works to elect Democratic state legislative candidates, “anti-democracy” state legislatures controlled 296 Electoral College votes—enough to decide the winner of the presidency.

After the election, anti-democracy state legislatures control 261 Electoral votes compared to 262 for pro-democracy legislatures (Arizona and New Hampshire are so closely divided they belong to neither camp).

“Those results have reduced the threat,” says Daniel Squadron, co-founder of the States Project, “but they have not eliminated it.”