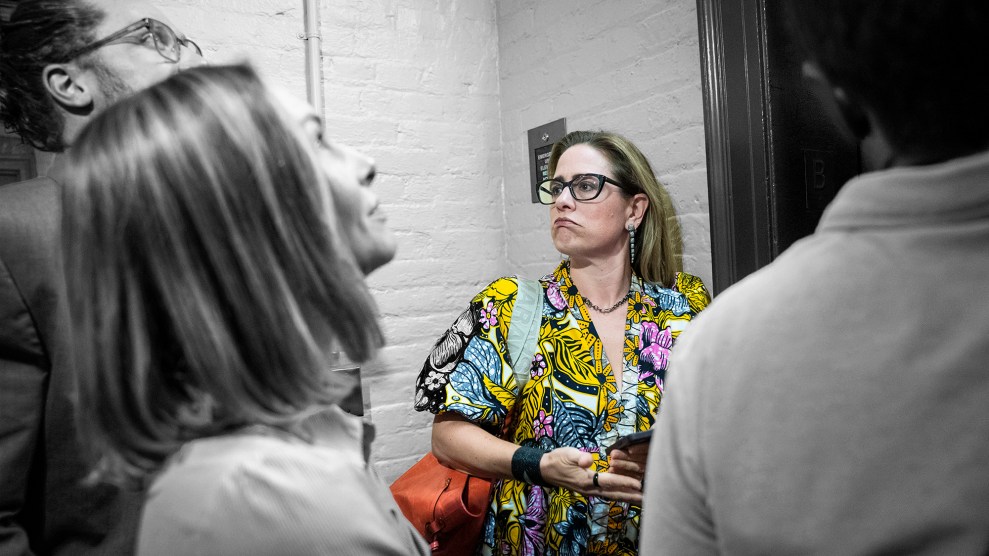 Kyrsten Sinema is back where she started. On Friday, the Arizona senator announced that she was leaving the Democratic Party, but would keep her committee appointments and not caucus with the Republicans. Twenty years after Sinema lost a race for state legislature as an independent, she is once again a party of one.

On a day to day basis, Sinema’s switch doesn’t necessarily change much. Democrats will still control the chamber, they’ll still need 60 votes to pass most legislation, and they’ll still be counting on one from the junior senator from Arizona. She will no longer be attending caucus lunches, but that’s really an issue for the catering staff. No one paying attention to Democratic politics or Capitol Hill would have characterized Sinema as a party loyalist over the last few years—or even the last decade, really—and she has gone out of her way to distance herself from the state and national Democratic parties time and again. In one sense, her announcement makes official a dynamic that has for a long time been frustratingly apparent to her critics.

The switch does change one big thing, though. Although she did not address this aspect of her future in an op-ed this morning in the Arizona Republic, nor in interviews with Politico and CNN, Sinema’s move upends what was already expected to be one of the 2024 cycle’s most competitive and expensive Senate races. Her popularity among Arizona Democrats has fallen through the floor over the last two years, due to Sinema’s opposition to changing Senate rules to push through key party priorities, like expanding voting access and preserving abortion rights. She was censured by the state party in January over her vote to preserve the filibuster. Activists have protested outside her office and even confronted her in a bathroom at Arizona State University. Democratic Rep. Ruben Gallego was reportedly gearing up for a primary challenge. His colleague, Rep. Greg Stanton, the former mayor of Phoenix, tweeted an internal poll that showed him beating Sinema in a primary 58 to 17.

In a statement on Friday, Arizona Democratic Party chair Raquel Terán acknowledged Sinema’s work on “several historic pieces of legislation” but accused her of falling “dramatically short” when it came to protecting voting rights and curbing corporate power:

As a party, we welcome Independent voters and their perspectives. Senator Sinema may now be registered as an Independent, but she has shown she answers to corporations and billionaires, not Arizonans. Senator Sinema’s party registration means nothing if she continues to not listen to her constituents.

When Sinema first won in 2018, she had earned, perhaps, a bit of leeway. No Democrat had been elected to the Senate from Arizona in three decades; the Democratic nominee for governor that same year lost by double-digits. But a succession of Democratic candidates have won statewide in the years since without running from their party affiliation; the idea that Sinema has perfected a unique political dance no one else can emulate doesn’t quite ring true.

By quitting the party, Sinema has solved the problem she faced of making it through a Democratic primary, by simply not having one. And in a battleground where key statewide races have been decided in recent years by razor-thin margins, the incumbent is potentially setting up a game of chicken with the party she’s now left: Would Democrats risk backing a strong candidate of their own, if a divided November electorate cleared the way for a MAGA Republican like, say, Kari Lake?

This sort of sudden change isn’t out of character. As I wrote in a profile of Sinema for the magazine last year, her career has been defined by a constant reinvention. A former anti-war activist who used to wear a pink tutu to events, she ran for office first as a Green Party member, then as an independent, and then eventually joined the Democratic party. As a state legislator she wrote a self-help book that renounced her old self and the organizing circles she’d been a part of. In the years since, she’s espoused a more focus-grouped, consensus-building style of politics, which she has argued can effect change in a more stable and sustainable way.

While progressives look at the last two years and see wasted (or perhaps half-taken) chances, Sinema would likely tell a different story. She was instrumental in the passage of the bipartisan infrastructure bill. She helped shepherd the passage of the codification of the right to same-sex and interracial marriage last week. She saved the carried-interest loophole. (Okay, she doesn’t really talk about that.) Currently, she’s working on an immigration reform proposal with a Republican, Sen. Thom Tillis. Power in the Senate flows through her—and that’s exactly the way she wants it.

“We make our own decisions, using our own judgment and lived experiences to form our beliefs,” she wrote in her op-ed announcing her departure. “We don’t line up to do what we’re told, automatically subscribe to whatever positions the national political parties dictate or view every issue through labels that divide us.” Her intense devotion to the rules and procedures of Washington may be non-partisan, but it is itself an ideology—one that presents a challenge to the image of an independent fiercely advocating for her state.

On Friday, CNN’s Jake Tapper asked her what her departure would mean for the balance of power in the Senate.

“I know you have to ask that question, Jake,” she replied. “But that’s kind of a DC thing to worry about.”

It is not as if the importance of which party controls a legislative body is a foreign concept to people in Arizona, though. Voters in one of the most intensely contested states in American politics are keenly aware of how politics works. They understand perfectly well that the US Senate is not some non-partisan community board, and that the balance of power there determines what gets prioritized and what doesn’t. One of the twists of Sinema’s turn as a self-appointed institutionalist is the way she positions the most Beltway-centric position possible as some kind of anti-establishment truth-telling.

There is a somewhat recent parallel to the role Sinema embraced today. In 2006, Connecticut Sen. Joe Lieberman ceded the Democratic mantle after losing a primary, to be reelected to the Senate under the banner of the “Connecticut for Lieberman” party. It is not a perfect comparison—Sinema hasn’t lost—but it is certainly an ironic one. Sinema got her start in Arizona politics as a political outsider who helped lead an anti-war coalition in the early 2000s, and Lieberman was one of the great villains of her cause. She considered him a “shame to Democrats” for his support for the invasion of Iraq, and led a caravan to Tucson to demonstrate outside of an event during his run for president.

Year later, as a member of the state senate, she singled Lieberman out as the kind of politician who was holding the party back. After a failed campaign in Massachusetts cost Democrats a Senate supermajority in 2010, she tried to spin the Republican’s victory as a positive, arguing it would free the caucus from the “pressure” of accommodating one impossible-to-please independent.

“What that means is the Democrats can stop kowtowing to Joe Lieberman and instead seek other avenues to move forward on health reform,” she said.

Now she’s betting that both parties will feel the pressure—and need her just as much as ever.