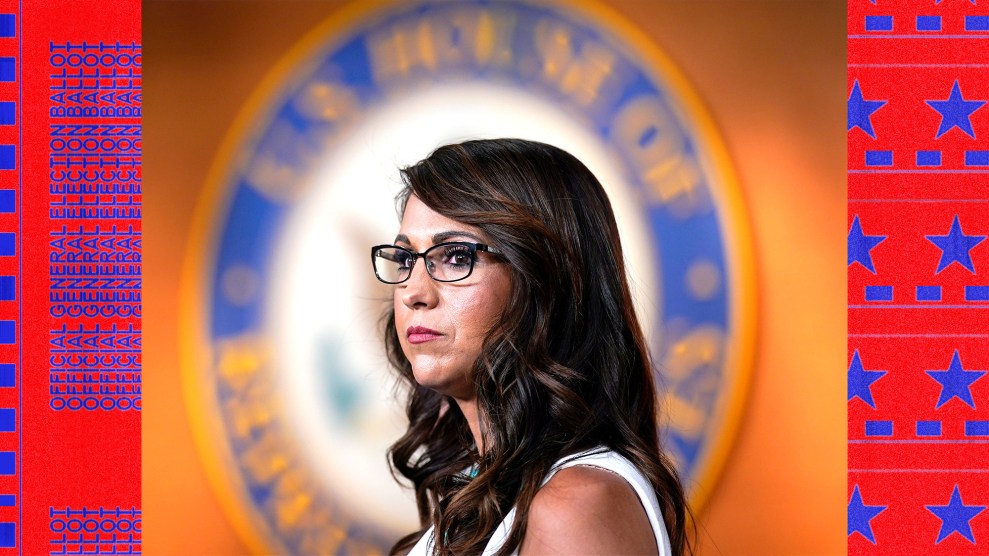 The only thing that’s certain in Colorado’s third congressional district is that it wasn’t supposed to be this close.

Most analysts assumed that Rep. Lauren Boebert (R-Colo.) would cruise to victory in her solidly red district, which became even more Republican after redistricting. In 2020, Boebert defeated her Democratic opponent by six percentage points. This year, FiveThirtyEight gave Boebert a 97 in 100 shot of winning. In June, when Boebert won her primary, I declared, “It looks like two more years of Lauren Boebert in Congress.”

But as election workers began tabulating votes, Democrat Adam Frisch took a narrow lead. On Wednesday, with about 97 percent of votes counted, Frisch led Boebert by 62 votes. By Thursday evening, Boebert had eked out a 1,122-vote lead, accounting for just 50.17 percent of the vote. As of Monday, the race is still too close to call.

“A Republican incumbent in a red district in a lean-Republican year should not be struggling like this, especially after doing reasonably well in 2020,” Seth Masket, a political scientist at the University of Denver, told me over email. Masket said that Boebert needed the support not only of her enthusiastic supporters, but of right-leaning unaffiliated voters, too. “Usually that’s not a problem for a generic Republican, but Boebert’s all-bombast-all-the-time behavior as an incumbent has clearly irked many of them.”

On Thursday, I drove from my home in Denver down to Pueblo, Colorado, the largest city in Boebert’s huge, diverse district. Pueblo, which has about a 50 percent Hispanic population, is a union town and one of the largest steel-producing cities in the United States. In the district’s large rural areas, many people find work as ranchers or in the oil and gas industry. The district also includes small, staunchly liberal enclaves, like the wealthy ski town of Aspen.

At the Shamrock bar in Pueblo, the only person who wanted to speak to me was a 51-year-old unaffiliated voter who identified himself as Ed. (He didn’t want his full name used, he said, because he had liberal friends.) Ed was concerned about inflation and was disappointed about the overturning of Roe v. Wade. He told me that, while he typically leaned conservative, he voted against Boebert this year.

Boebert’s political stunts over the last two years included vowing to bring a pistol to the Capitol—a promise that never materialized—heckling President Joe Biden at his State of the Union address, and suggesting that Rep. Ilhan Omar (D-Minn.) was a terrorist. She has touted legislative achievements—like federal funding for rural community health centers—while actually voting against those very measures in Congress.

Ed told me that it helped that Frisch was fairly conservative. “If he was super far left, I wouldn’t have voted for him.”

Based on his public image, an unsuspecting voter might assume that Frisch was a Republican. In an ad on his website, he says, “I won’t be a yes-man for Biden, or Trump, or vote for Pelosi for Speaker.” The phrases “Conservative businessman,” “Supports 2nd Amendment,” “Secure the border,” and “Less regulation” flash on the screen. Sure, he’s pro-choice—but you’ll only find that category on his webpage after scrolling past Inflation, Jobs, Water, Energy, Veterans, Fiscal Responsibility, and Education.

“I think Adam came so close because of that conservative businessman slogan,” Dominic Nava, a political consultant who knocked doors for Frisch alongside the union organization Colorado WINS, said. Nava had expected the election to be a landslide Boebert win, but he said Frisch’s ability to relate to conservative-minded voters was crucial. Independents make up about 44 percent of the district’s active voters.

Frisch could appeal to conservatives who didn’t want the baggage of Boebert’s attention-seeking antics. “You can’t even mention her name in a restaurant because 50 percent of people start screaming and 50 percent start applauding,” a voter told the Wall Street Journal.

Still, while Boebert has about as many dissatisfied constituents as loyal fans, there is a small yet vocal group of people whose only explanation for the closeness of the race is foul play.

At the county clerk and recorder’s office, dozens of election workers sat at folding tables, removing ballots from their envelopes and placing them in stacks. When I arrived, Pueblo County Clerk and Recorder Bo Ortiz told me that there were about 5,000 ballots left to count that day.

Voters whose signatures were rejected would have until Nov. 16 to “cure” their ballots. Military and overseas ballots must be counted by the same deadline. If, after those votes are accounted for, the margin between Boebert and Frisch is less than half a percentage point, the state will automatically conduct a recount. (If the margin is greater, either candidate can request a recount, but they’ll have to foot the bill.)

In the hallway outside the election office, a group of people stood in front of a window where they could watch ballots being fed into a counting machine. Among them was a woman who said that she thought there was cheating, because if 75 percent of Americans think the country is going in the wrong direction, how could Lee Zeldin have lost in New York? A young man, unconvinced of the fairness of this election, approached me and said, “I heard they mysteriously found some ballots.”

Earlier that day, I’d met Richard Klepper, a 68-year-old from a small town (population: 863) an hour south of Pueblo. He was smoking a cigarette outside of a sushi restaurant when he told me that Boebert is a “spunky little gal” who has been “voting against bills that are lined with pork.”

When I asked if he expected the race to be so close, he said yes. “You really want to know?” he said, leaning in. “I think there’s a lot of cheating going on in this state.”