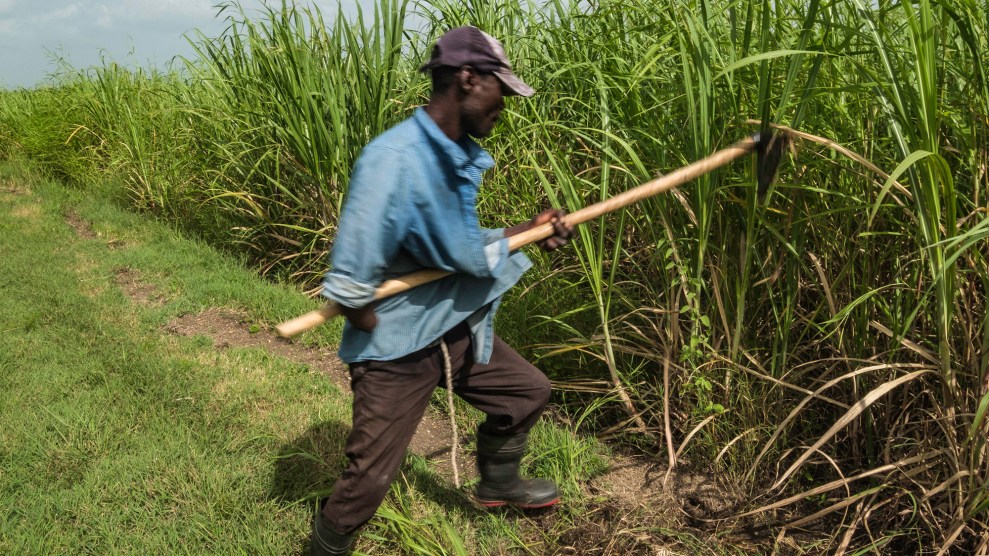 A worker of Central Romana, preparing the field for the upcoming sugar crop in La Romana.Pedro Farias-Nardi

The United States will block shipments of raw sugar from a top Dominican producer with close ties to two wealthy Florida businessmen after finding indications of forced labor at its sprawling Caribbean plantation. Sugar from the Central Romana Corp.’s cane fields feeds into the supply chains of major U.S. brands, including Domino and the Hershey Co.

The ban on all imports from Central Romana went into effect today.

“Manufacturers like Central Romana, who fail to abide by our laws, will face consequences as we root out these inhumane practices from U.S. supply chains,” said AnnMarie R. Highsmith, executive assistant commissioner at U.S. Customs and Border Protection’s Office of Trade in a press release.

The company is owned in part by the Florida-based Fanjul Corp., a global sugar and real estate conglomerate.

This action follows a two-year investigation by Reveal from The Center for Investigative Reporting and Mother Jones that sparked criticism of the Dominican sugar industry from Democratic lawmakers in Washington.

The Reveal/Mother Jones investigation, released in September 2021, found grim conditions for the cane cutters and their families, who live in ramshackle company housing, often with no electricity or running water. In more than 50 interviews, workers spoke of inadequate protective gear, poor medical care, low pay, chronic debt and intimidation by the company’s armed security force.

Thousands of men who harvest sugarcane for Central Romana are Haitian citizens or of Haitian descent and many do not have legal status in the Dominican Republic. Unable to collect long-overdue pensions, some workers said they were forced to cut cane into their 80s.

In calling for action from the Biden administration, lawmakers cited Reveal and Mother Jones and subsequent reporting in The Washington Post and Jacobin.

A Central Romana spokesperson released two statements. The English version said the company is “very disappointed” with the decision to block its exports to the U.S.

“We disagree vehemently with the decision as we do not believe it reflects the facts about our company and the treatment of our employees,” the statement said.

The company said it’s committed to providing safe employment, and it recognizes the need to “continuously evolve our work environment and the living conditions of our employees.”

The company also said it intends to “work collaboratively with [the U.S. customs agency] to resolve this matter.”

But in the statement released in Spanish, Central Romana struck a more defiant tone, leaving out any mention of working with the U.S. government.

The Spanish version reads: We hold our heads high because we know that for more than a century we have acted correctly.

Central Romana is part of a sugar empire built by Alfonso “Alfy” and Jose “Pepe” Fanjul beginning in the 1960s. The Florida businessmen and brothers led a group of investors in the purchase of Central Romana and its luxury Casa de Campo resort in 1984 and have further expanded through a web of private holding companies, partnerships and affiliates.

A Central Romana spokesperson said last year that the company does not publicly disclose the identities of its board of directors and corporate officers. However, Alfonso Fanjul is listed as Central Romana’s president in press releases and recent corporate filings in the Dominican Republic.

The Fanjuls also co-founded the ASR Group, which controls the world’s largest network of sugar refineries. ASR’s holdings include the iconic Domino plant in Baltimore, which handled more than half of Central Romana’s shipments to the U.S. last year, according to commercial trade data.

Central Romana has previously denied allegations of forced labor. The company has said it has invested millions of dollars to improve living conditions for cane cutters and their families, while paying salaries twice the country’s minimum wage and working closely with a labor union.

The Fanjul Corp., where Alfonso is chairman and Jose is president, did not respond to questions about the announcement. The company has praised Central Romana as a “highly respected corporate citizen in the Dominican Republic” that “takes pride in its reputation for civic activities and ethical business practices.”

The Dominican sugar industry has faced allegations of labor exploitation for decades. Complaints to the U.S. Department of Labor led the agency to begin sending monitoring teams to the Dominican Republic in 2013 under the terms of an international trade agreement.

In annual reviews released to the public, the Labor Department reported “positive steps” in curbing child and forced labor in the Dominican sugar sector, though it said progress was “uneven.” Behind the scenes, U.S. officials were concerned about the slow pace of reforms at Central Romana and its suppliers, according to a trove of heavily redacted field reports and other documents obtained after Reveal sued the Labor Department.

One undated report described cane cutters and their families living in tiny rooms in old barracks with open water on the ground and no bathroom. Another document, a 2018 cable from the U.S. Embassy in Santo Domingo, referred to evidence of abusive working and living conditions and other problems at Central Romana but noted “further study” was needed to determine if the situation would require U.S. Customs and Border Protection to block exports to the United States.

Human rights and labor groups and clergy have advocated for better conditions for the Haitian cane cutters for decades.

“It has been a very long road, strewn with countless hardships and challenges,” said Father Christopher Hartley, a Spanish priest whose efforts to expose abuses in the Dominican sugar industry triggered the Labor Department’s monitoring. “Today the hour of justice has finally arrived in the sugarcane fields of the Dominican Republic.”

In January, 15 Democratic lawmakers referenced the Reveal/Mother Jones investigation in calling on three federal agencies, including U.S. Customs and Border Protection, to address “slave-like” conditions in the Dominican sugar industry. Their letter urged the agencies to review the alleged violations and consider the Biden administration’s policy options – including banning any goods produced by forced labor, under the Tariff Act.

In the face of such pressure from Washington, the Dominican government announced a raise to the agricultural workers’ minimum wage and promised to register undocumented cane workers and pay out pensions.

Democratic U.S. Reps. Richard E. Neal of Massachusetts, chairman of the House Ways and Means Committee, and Earl Blumenauer of Oregon, the Trade Subcommittee chair, praised the decision from the Biden administration in a joint statement.

“As families around the country prepare their Thanksgiving sweets, they’d be horrified to know the atrocities that workers endure in cultivating one of their key ingredients,” they said. “Central Romana Corp. and the Dominican sugar industry have operated with impunity for far too long.”

This is the first time in recent years that U.S. Customs and Border Protection has used the Tariff Act’s provisions to target sugar imports. But similar concerns over forced labor have led to bans on products such as seafood and palm oil from companies in Taiwan and Malaysia, respectively, and cotton and human hair pieces believed to have been made by persecuted Uyghur Muslims in Chinese labor camps.

Analysts said the loss of Dominican sugar could trigger disruptions in the U.S. market, especially in the Northeast, where ASR operates two large refineries.

Although Central Romana accounts for roughly 7 percent of total U.S. raw sugar imports, the supply cutoff could cause “uncertainty” in an already-tight market, said Vincent O’Rourke, analyst for the Czarnikow Group, a London-based trade financing firm.

ASR supplies sugar to a wide range of food and beverage producers, confectioners and grocery stores and has partnerships with Hershey, whose chocolate factory is 90 miles from ASR’s Domino refinery in Baltimore.

A Hershey spokesperson declined previous requests before the customs announcement to share a detailed breakdown of sugar purchases, but the company claimed that 100 percent of its sugar came from responsible and sustainable sources in 2020.

“While Central Romana does not supply sugar directly to Hershey, we are actively working with our direct sugar providers to assure our responsible sourcing requirements and standards are met or exceeded,” said Hershey chief procurement officer Tricia Brannigan in an emailed statement.

The loss of access to the U.S. market, even temporarily, could cost Central Romana tens of millions of dollars annually. The Dominican Republic is the second-largest exporter of raw sugar to the U.S. under a complex federal system that protects domestic producers by restricting imports. The U.S. is a prized market because of congressionally backed sugar price supports that pay well above the world market rate. Central Romana typically has accounted for nearly two-thirds of the Dominican quota and enjoys low tariffs on its exports to the U.S.

This story was developed in partnership with Reveal from The Center for Investigative Reporting and with support from the Pulitzer Center. It was edited by Kate Howard and Clint Hendler and copy edited by Nikki Frick.

Jenny Casas and Euclides Cordero Nuel contributed to this report. Sandy Tolan can be reached at atolan@usc.edu, and Michael Montgomery can be reached at mmontgomery@revealnews.org. Follow them on Twitter: @Sandy_Tolan and @mdmontgomery.