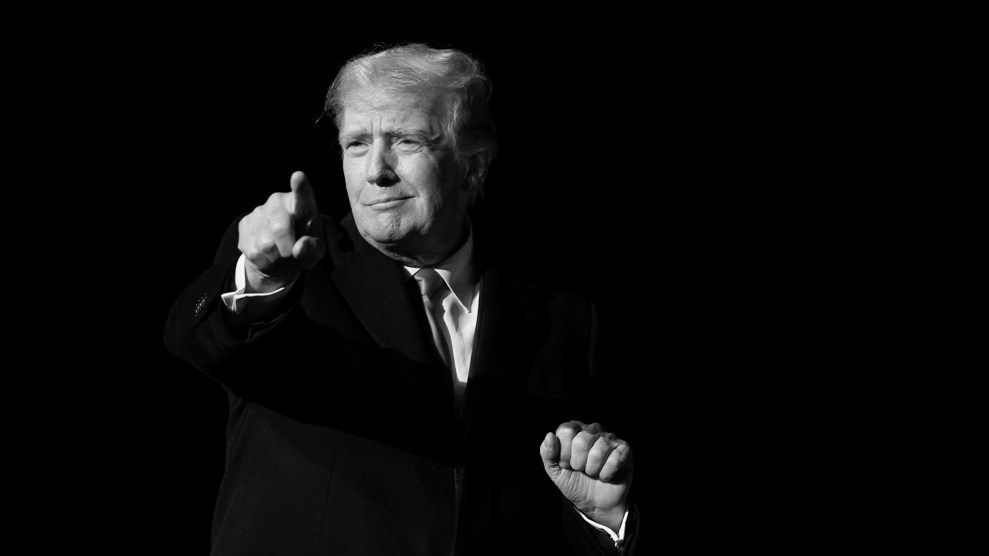 Trump points to supporters after speaking at a campaign rally in support of Ohio Senate candidate JD Vance at Dayton International Airport on Nov. 7, 2022.Michael Conroy/AP

Two days after a 42-year-old man broke into the San Francisco home of House Speaker Nancy Pelosi and brutally assaulted her husband with a hammer, Donald Trump conveyed no regret or sense of responsibility for the politically motivated attack, whose accused perpetrator confessed to police that he was driven by a loathing for Pelosi and the allegedly “corrupt” Democratic Party. Instead, Trump depicted the “horrible” event as typical of rising crime in Democrat-led cities.

But not even that pretense was relevant to Trump’s rhetoric by the final evening before Election Day 2022, when the ex-president appeared at a rally in Ohio for Republican Senate candidate JD Vance. With 82-year-old Paul Pelosi still just beginning to recover from a fractured skull, Trump parlayed a long-running demonization of immigrants into a fresh personal attack on the House speaker. He recounted a murder committed by an alleged gang member with ties to Central America, part of a familiar diatribe smearing immigrants broadly as vicious criminals.

“Nancy Pelosi said, ‘Please don’t call them animals, they’re human beings.’ I said, no, they’re animals,” Trump scoffed. “Of course, I think she’s an animal too, if you want to know the truth.”

The crowd roared with approval.

It’s not just that Trump brazenly continues to put a target on the House speaker personally, even after she was just targeted in an assassination plot and her husband nearly was murdered. The ex-president’s language on Monday night is further disturbing in a specific regard: By dehumanizing Pelosi, Trump is boosting the likelihood that a random extremist supporter will be moved to commit an act of violence in response. Such rhetoric is an accelerant for the incitement technique known as stochastic terrorism, according to research from behavioral psychology experts. Trump’s efforts to breed contempt and disgust for his political adversaries, in other words, serves to harden hatred against them and increases the danger of another violent attack.

Since the horror at the Pelosis’ home on October 28, right-wing media and Republican politicians have let loose a deluge of misinformation to distract from suspect David DePape’s intent, in part by citing some of his reported ties in years past to leftist politics in the Bay Area. A majority of political assassins, mass shooters, and others who commit acts of targeted violence have complicated backgrounds and mental health profiles, as I document extensively in my recently published book Trigger Points.

In many cases, motive can be difficult to discern. DePape’s case is not one of them.

In addition to recent online activity showing that DePape was fixated on hateful far-right ideology and conspiracy theories, court documents from local and federal prosecutors detail how he was driven by ideas that reflect the demagoguery espoused at length by Trump and his allies in the right-wing media and the GOP. DePape told police investigators that he believed the Democratic Party was all “corrupt” and that Nancy Pelosi was the “leader of the pack.” He allegedly told Paul Pelosi shortly before smashing his head with the hammer that “we’ve got to take them all out.” He confessed his intent to kidnap the House speaker (who was in Washington at the time) and to “break her kneecaps” if she “lied” to him under interrogation. Along with two hammers, gloves, rope, and other items, DePape had brought a supply of zip ties—emblematic tactical gear from the January 6 insurrection—intending to use them for his hostage-taking.

“I’m sick of the insane fucking level of lies coming out of Washington, DC,” he told police and medics as they attended to Paul Pelosi, who’d been knocked unconscious and lay in a pool of blood. “I came here to have a little chat with his wife.”

As Trump continued to escalate his political incitement at the Monday night rally—a technique he has spread throughout the GOP—CNN aired an interview by Anderson Cooper with a visibly emotional Nancy Pelosi, who long ago grew accustomed to being a top political target. “I never thought it would be Paul,” she said, adding, “for me this is really the hard part, because Paul was not the target and he’s the one who’s paying the price—we all are, but he’s the one who’s really paying the price.”

Cooper asked Pelosi if it was fair to compare the attacker’s motivation with what drove so many people to storm the Capitol on January 6.

“There’s no question it’s the same thing,” she replied, suggesting that DePape was “inflamed by the same misrepresentation” from Trump and his allies.

“The fact is, this is a one-sided assault on our democracy,” the long-serving House speaker said, pointing to the election lies and misinformation that have become central to the Trump-dominated GOP. She reiterated the need for “a strong Republican Party” with leaders who would take pride in working together with Democrats to help improve the country, “instead of yielding to a thug.”

“A vote tomorrow,” Pelosi said, “is a vote to defend our democracy.”