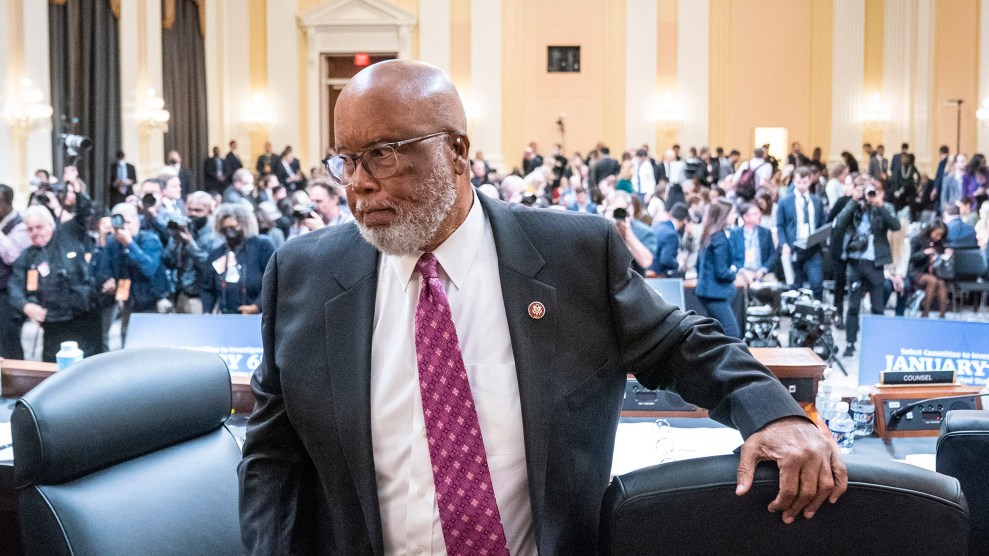 Representative Bennie Thompson, Chair of the House Select Committee to Investigate the January 6th Attack on the US Capitol. Jabin Botsford/Pool/CNP/Zuma

Republicans have won control of the House of Representatives, and that means the January 6 committee will be coming to an end. It might also lead to GOP efforts to exact revenge on the panel by attacking its work—and its members.

The committee is set to dissolve along with the current Congress on January 3. Had Democrats retained the House, however, they could have renewed the panel.

House Minority Leader Kevin McCarthy, who hopes to become speaker, has made his hostility to the committee clear, attacking it as partisan. McCarthy has personal stake in the issue. The California Republican spoke to Donald Trump on January 6 and in the following days. Audio tapes later uncovered by New York Times reporters revealed that McCarthy had lied in public statements about his conversations with Trump and other lawmakers at the time. McCarthy is also among Republican lawmakers who the committee has subpoenaed. In a letter explaining McCarthy’s refusal to comply with a subpoena, McCarthy’s attorney accused the panel of using “the full force of the federal government to attack perceived political rivals.”

The Justice Department and special grand jury in Fulton Country, Ga., are still considering filing criminal charges related to the Trump’s effort to retain power. But the congressional committee has a different mandate, in part to “report upon the facts” about the attack on Congress and “interference with the peaceful transfer of power.” The panel plans to issue a final report before it disbands. Its likely findings were previewed at the committee’s last hearing on October 13, where members voted to subpoena former President Donald Trump. “In staggering betrayal of his oath, Donald Trump attempted a plan that led to an attack on a pillar of our democracy,” Rep. Bennie Thompson (D-Miss.), the committee chair, said at the hearing.

The Associated Press reported last month that committee members and staff are strategizing over how to preserve access for prosecutors and eventually the public to material the committee has gathered, including “transcripts of more than 1,000 interviews and millions of other documents.” A committee spokesperson did not respond to an inquiry.

Some Trump loyalists have already said that they want to attack the panel’s findings and even its members. GOP lawmakers have reportedly discussed subpoenaing committee members or establishing a new select committee to investigate issues like their contention that House Speaker Nancy Pelosi was at fault for lax security at the Capitol on January 6. They might also probe the DOJ’s prosecution of rioters.

It’s not clear if McCarthy will back such efforts. A spokesperson for McCarthy did not respond to questions. But given Republicans’ narrow majority in the House, McCarthy needs support of the far right in his caucus, including members who have said they hope to target the January 6 committee.

Republicans are also likely to use subpoena power on other House committees to pursue investigations that they hope will counter the January 6 committee’s findings. Rep. Rodney Davis (R-Ill.), the top Republican on the House Administration Committee, said in June that if Republicans win the House, “one of our first priorities is going to be launching a full investigation into Speaker Nancy Pelosi and the Select Committee’s circus.”

Davis was defeated that month by a primary challenger. But the Republican next in line to head the administration committee, Rep. Barry Loudermilk (R-Ga.), has himself been the subject of scrutiny from the January 6 committee, which sought to question him about a Capitol tour he personally led on January 5, 2021. Loudermilk previously told CNN he hoped to pursue the investigation Davis had announced.

Other GOP members could launch investigations aimed at bolstering election fraud conspiracy theories. Rep. Andy Biggs (R-Ariz.), who was subpoenaed by the January 6 committee due to his consultations with Trump about overturning the 2020 election results, is among the GOP members who signed a letter asking the House Oversight Committee to hold hearings on bogus election fraud claims made in the debunked movie “2000 Mules.”

Rep. Jim Jordan (R-Ohio), who was also subpoenaed after advising Trump in 2020 on his efforts to retain power, is in line to chair the House Judiciary Committee. Jordan, like the other GOP lawmakers subpoenaed, refused to comply. Jordan has already attacked the FBI and Justice Department for investigating Trump. He is expected to use the judiciary panel to try to undermine the department’s investigation into the January 6 attack.