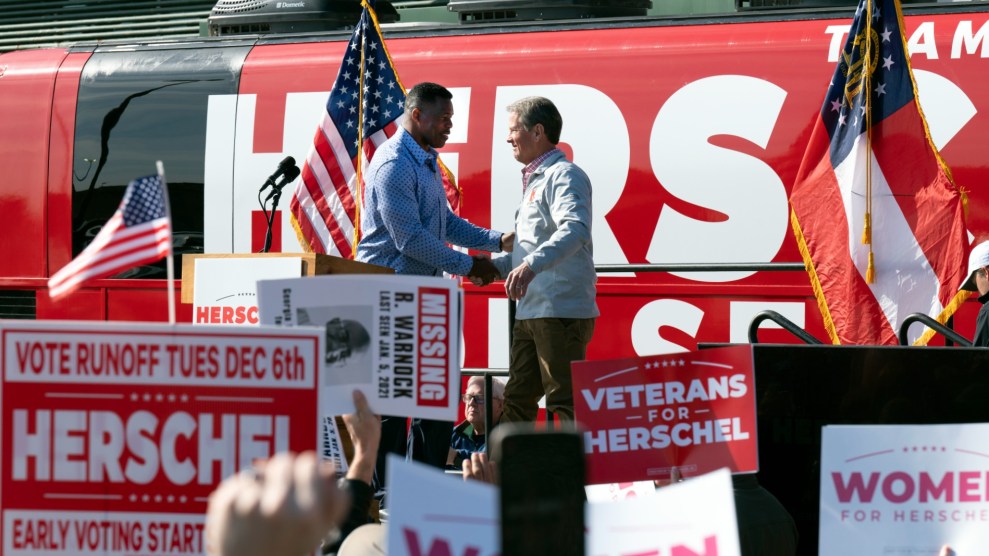 Two years ago, Herschel Walker said that some state officials who certified Joe Biden’s election victory over Donald Trump should go to jail.

At a campaign rally last weekend, Walker embraced one of the people he seemed to suggest should be locked up: Georgia Governor Brian Kemp, who stumped with Walker in a last-ditch effort to to boost the ex-football star’s struggling campaign as he faces a run-off against Democratic Sen. Raphael Warnock.

Though it didn’t get much attention during Walker’s scandal-plagued Senate bid, he went all in on the Big Lie in the aftermath of the 2020 election, promoting an assortment of election fraud conspiracy theories. In the days and weeks after the November 2020 presidential election, Walker called on the Supreme Court to step in to change the election results; advocated for seven states to throw out their election results and hold new elections; argued that there was “country wide election fraud”; and pleaded for Trump to figure out who “stole this election.”

On December 27, 2020, Walker also took aim at state officials for not doing more to keep Trump in the White House, tweeting that “any person that certified Votes for their state when their state may have had voter fraud but they turned a blind eye and did no research and certified anyway, they need to go to JAIL ASAP. Our Country was built on LAW AND ORDER.”

After reading @SidneyPowell1 's 270 page report, any person that certified Votes for their state when their state may have had voter fraud but they turned a blind eye and did no research and certified anyway, they need to go to JAIL ASAP.
Our Country was built on LAW AND ORDER

In Georgia, one of the places Walker alleged there was rampant fraud, the primary people involved in certifying the 2020 election results were Secretary of State Brad Raffensperger and Kemp.

Walker took issue with both of them. He called out Kemp by name for not doing more to overturn the election results. “Why Is @Briankempga Refusing To Ensure That Voter Signature Verification Was Enforced? Shows That Something Is Up,” Walker tweeted on December 18, 2020.

He criticized Raffensperger for the release of audio from his infamous call with Trump, in which Trump asked Raffensperger to “find” Trump enough votes to overturn the election. “The Secretary of State in GA leaked a call he had with @realDonaldTrump….An elected official leaking calls- does that not tell you the type of man we put in office?” Walker tweeted on Jan. 31, 2021.

But now, Walker is getting assistance from both Kemp and Raffensperger.

On Saturday, for the first time, Kemp joined Walker on the campaign trail in the suburbs of Atlanta. “I know that Herschel Walker will fight for us,” Kemp said. “He will go and fight for those values that we believe in here in our state.”

Raffensperger has not stumped for Walker, but his office did just try to appeal a judge’s decision to allow early voting on November 26, the only Saturday that early voting would be available before the Dec. 6 run-off.

Before a judge ruled against him, Raffensperger tried to block early voting this upcoming Saturday based on his strict interpretation of a vague 2016 law, which he contends stipulates that early voting cannot take place within two days of state holidays. In the case of the 2022 run-off, Raffensperger argues that Thanksgiving and a holiday commemorating confederate general Robert E. Lee should prevent early voting on November 26.

The Georgia Court of Appeals declined Raffensperger’s appeals request on Monday, though the Georgia Republican Party is now appealing that decision at the state’s Supreme Court. If this appeal is successful, the elimination of the early voting day will likely boost Walker, as early voters are disproportionately Democrats.

Kemp and Raffensperger handily won their races against Democratic challengers. Kemp beat Democrat Stacey Abrams by a 53-46 margin. Raffensperger beat his Democratic challenger by a 53-44 margin. Meanwhile, Walker trailed Warnock by 38,000 votes, or roughly 1 percent, in November. (Georgia election law requires Walker and Warnock to proceed to a run-off since neither candidate received more than 50 percent of the vote.)

Experts credit some of Kemp and Raffensperger’s success to them bucking Trump by carrying out their legal obligations to certify the 2020 election results after there was no evidence of widespread voter fraud.

As my colleague Ari Berman reported in early November, Kemp’s refusal to be an accomplice to Trump’s attempted election thievery allowed him “to appear like a moderate without ever having to moderate any of his hard-line policy positions, such as supporting a six-week abortion ban, the right to carry a handgun practically anywhere without a permit, and refusing to expand Medicaid while Georgia hospitals close.”

Berman added: “Kemp’s certification of the last election—and the media’s fawning coverage of it—has allowed him to distance himself from the scores of GOP candidates this year who have questioned or sought to overturn the election results.”

Though Walker has been notably quiet on election fraud conspiracies since launching his Senate bid, his past statements speak for themselves, as does the support he’s received from at least one outright election denier, Jim Worthington, who once claimed there was “no doubt in [his] mind that the results reported in this election are inaccurate and corrupted and need to be challenged at every level legally or otherwise.”

Worthington, a Trump administration appointee who bused around 200 people to Washington on January 6, 2020, is the owner of Newtown Athletic Club, which last December donated $50,000 to a super-PAC supporting Walker. Pictures obtained by Mother Jones also show that Worthington’s business hosted an event with Walker in February 2022.