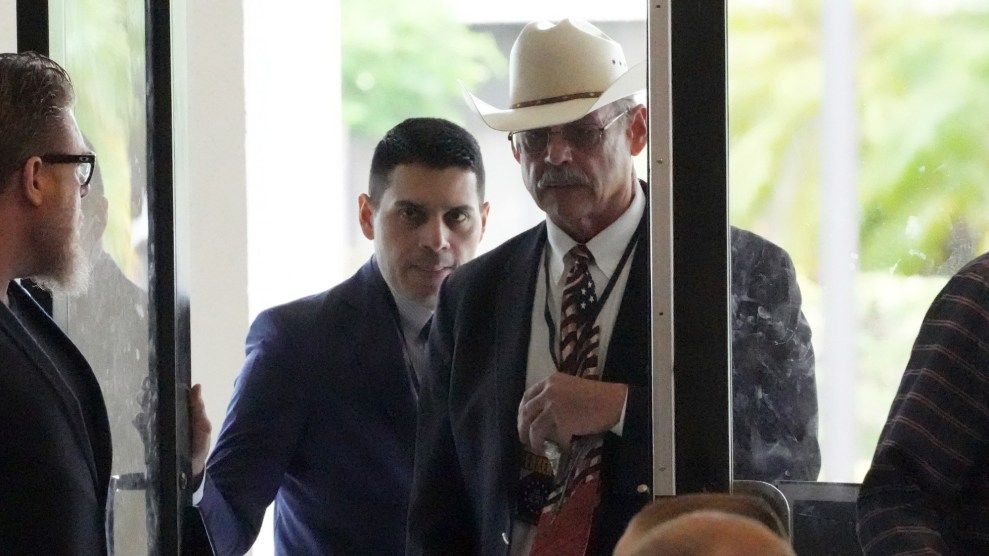 Mark Finchem, Republican candidate for the Secretary of State of Arizona, attends a conference promoting conspiracy theories about voting machines and discredited claims about the 2020 presidential election at a hotel in West Palm Beach, Fla.Jim Rassol / AP

This past weekend, Mark Finchem, the Republican candidate for secretary of state in Arizona, took precious time away from campaigning to fly to Florida to participate in a conference of 2020 election denialists and conspiracy theory extremists. His attendance was hardly surprising. The QAnon-friendly Finchem, who was recently accused of posting an antisemitic tweet and who was on the Capitol grounds during the January 6 riot, has been one of the leading champions of Donald Trump’s Big Lie that the election was stolen from him. At the Florida event, Finchem repeated old debunked allegations that Joe Biden did not win the vote in Arizona two years ago, and he mocked his political foes for calling him a “dangerous man.” Finchem said innocently, “I simply want to make sure that everybody follows the law.” Yet his own lawyer was directly involved in 2020 election shenanigans of dubious legality.

Several times, Finchem has had to call in legal power due to his presence at the Capitol on January 6. Earlier this year, a voting rights group in Arizona filed a lawsuit to throw Finchem and GOP Reps. Paul Gosar and Andy Biggs of Arizona off the ballot, contending they were disqualified due to their involvement in January 6 and the efforts to overturn the 2020 election. Two weeks ago, Finchem sent a cease-and-desist letter to Arizona television stations demanding they stop airing a Democratic ad claiming he “helped organize the January 6 protests where police were attacked.” (Finchem insisted he was not involved in the organizing of the event. Video footage shows he was by the east steps of the Capitol when rioters were battling law enforcement officers.) In each instance, the lawyer representing Finchem was a Phoenix attorney named Jack Wilenchik.

Wilenchik, who also represented the Cyber Ninjas, the firm that conducted a shoddy, partisan, and discredited review of the Arizona 2020 vote count (and was subsequently shut down), prevailed in preventing Finchem from being kicked off the ballot. And like his client, Wilenchik was involved in the effort to overturn the 2020 election. His participation in one particular scheme to keep Trump in power subsequently raised questions about that endeavor’s legality.

In the final weeks of the Trump presidency—after he had clearly lost the election—Trump allies, including Rudy Giuliani, hatched a plan to concoct alternative slates of Electoral College electors in battleground states who supported Trump. The idea was that these slates would be presented to Congress to sow confusion and prevent Congress from certifying the electoral vote in favor of Joe Biden. This fake-elector scheme is now the subject of multiple state and federal investigations.

Wilenchik played a role in this plot. A few months ago, New York Times reporters obtained access to email messages used by participants in this scheme, including Wilenchik. The newspaper reported,

The dozens of emails among people connected to the Trump campaign, outside advisers and close associates of Mr. Trump show a particular focus on assembling lists of people who would claim—with no basis—to be Electoral College electors on his behalf in battleground states that he had lost.

In emails reviewed by The New York Times and authenticated by people who had worked with the Trump campaign at the time, one lawyer involved in the detailed discussions repeatedly used the word “fake” to refer to the so-called electors, who were intended to provide Vice President Mike Pence and Mr. Trump’s allies in Congress a rationale for derailing the congressional process of certifying the outcome. And lawyers working on the proposal made clear they knew that the pro-Trump electors they were putting forward might not hold up to legal scrutiny.

“We would just be sending in ‘fake’ electoral votes to Pence so that ‘someone’ in Congress can make an objection when they start counting votes, and start arguing that the ‘fake’ votes should be counted,” Jack Wilenchik, a Phoenix-based lawyer who helped organize the pro-Trump electors in Arizona, wrote in a Dec. 8, 2020, email to Boris Epshteyn, a strategic adviser for the Trump campaign.

In a follow-up email, Mr. Wilenchik wrote that “‘alternative’ votes is probably a better term than ‘fake’ votes,” adding a smiley face emoji.

The emails suggest that Wilenchik and others realized they were assembling illegitimate slates of electors to stir up a phony controversy that would impede the certification of the vote count for Biden.

In a December 8, 2020, email to Epshteyn and several lawyers working on this plan, Wilenchik cited an idea proposed by Kenneth Chesebro, an attorney working with John Eastman, a conservative lawyer and Trump adviser who helped guide the fake electors scheme.

His idea is basically that all of us (GA, WI, AZ, PA, etc.) have our electors send in their votes (even though the votes aren’t legal under federal law—because they’re not signed by the Governor); so that members of Congress can fight about whether they should be counted on January 6th.

Aren’t legal under the law. This was Wilenchik’s assessment: Fake electors would send in electoral votes that were not legal. It was designed as a ruse to impede the orderly certification of the vote and provide Trump the opportunity to retain power.

That same day, Wilenchik, according to the Times, also sent an email stating that Kelli Ward, a Republican leader and top election denialist in Arizona who was in on the fake-electors plan, suggested they “keep it under wraps until Congress counts the vote Jan. 6th (so we can try to ‘surprise’ the Dems and media with it).” He wrote, “I tend to agree with her.” In other words, use electoral votes that “were not legal” as a sneak attack on the constitutional order to keep Trump in the White House. That’s what Finchem’s legal lieutenant was cooking up.

In February, Finchem was subpoenaed by the House January 6 committee for his own possible ties to the fake-electors conspiracy.

Back to the Florida conference. With an aw-shucks manner, Finchem dismissed criticism of his promotion of election fraud claims and insisted that all he cared about was sticking to the law. Yet on January 6 he was at the Capitol, where he posted a tweet during the riot that indicated empathy for the violent lawbreakers: “What happens when People feel they have been ignored, and Congress refuses to acknowledge rampant fraud. #stopthesteal.” And he has a close association with Wilenchik, one of the key architects of that attempt to use fake votes that “aren’t legal” to subvert a democratic election. Apparently Finchem is not the stickler for the law he claims to be.