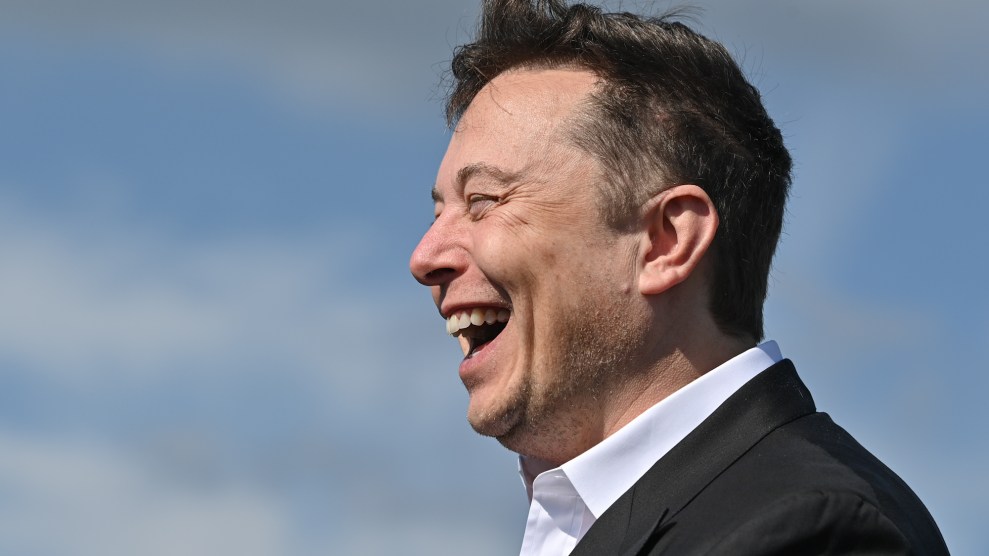 Editor’s note: The below article first appeared in David Corn’s newsletter, Our Land. The newsletter is written by David twice a week (most of the time) and provides behind-the-scenes stories about politics and media; his unvarnished take on the events of the day; film, book, television, podcast, and music recommendations; interactive audience features; and more. Subscribing costs just $5 a month—but you can sign up for a free 30-day trial of Our Land here. Please check it out. And please also check out David’s new New York Times bestseller: American Psychosis: A Historical Investigation of How the Republican Party Went Crazy.

Two serious threats—Republican extremism and the takeover of Twitter by billionaire Elon Musk—intersected in one 16-word tweet this weekend.

When Hillary Clinton on Twitter cited a Los Angeles Times article that reported the would-be assassin of Nancy Pelosi, who assaulted Pelosi’s husband Paul, was a QAnon fanboy who espoused right wing conspiracy theories and extreme MAGA rhetoric, Musk replied with a tweet promoting a false story disseminated by a known disinformation site that claimed that the assailant was a man Pelosi had met in a gay bar late that night. Flogging this baseless assertion to counter Clinton’s tweet and the Los Angeles Times article, Musk observed, “There is a tiny possibility there might be more to the story than meets the eye.” Reasonable folks on Twitter howled, but before Musk deleted this post hours later, it had been retweeted at least 24,000 times. The new owner of Twitter had helped spread a conspiracy theory designed to undermine the fact that a fellow propelled by right-wing extremism had apparently tried to kill Pelosi, who has long been demonized by the GOP and conservative media.

There is so much that is wrong with this picture. This episode suggested that Musk, the guy now in charge of Twitter, is unable—or unwilling—to discern disinformation from legitimate material. (The source of the bogus article Musk boosted is well-known as a publisher of false information and once claimed Hillary Clinton was replaced by a body double for a debate with Donald Trump in 2016.) This was a stark demonstration of Musk’s severe lack of judgment and a cavalier attitude toward the importance of truth in the public square.

There’s more: This tweet also illustrated how Musk was eager to push back against bad news for the Trumpian right. The brutal hammer attack on Paul Pelosi, which sent him to a hospital for surgeries related to head and arm injuries, cast a bright light on Republican extremism. Trump has embraced QAnon conspiracism, which has repeatedly led to violence, and the GOP has accepted the merger of QAnon and MAGAism. As I reported recently, three prominent Republican secretary of state candidates, each QAnon-aligned, participated in a Florida conference that featured a white nationalist, assorted conspiracy nutters, and fellow 2020 election denialists. According to the Los Angeles Times, Pelosi’s assailant was a denizen of the dark and demented world of QAnon, Holocaust denialism, anti-vaxxism, and other far-right conspiracies, many of which are encouraged, amplified, or winked at by Trump, other Republicans, Fox News, and various conservative outlets. The right’s efforts to dismiss the meaning and significance of the Pelosi attack—Donald Trump Jr., Virginia Gov. Glenn Younkin, and other Republicans even joked about it—was a move to deflect attention from the GOP’s connection to far-right fanaticism.

Have you no decency?
(That’s a rhetorical question.) pic.twitter.com/rxSfyjAZnq

The Pelosi assault comes at a time when far-right extremism appears to be on the rise. Trump has embraced QAnon and vowed that he would pardon January 6 rioters were he to be elected again to the White House. A recent poll shows that 52 percent of Trump voters in 2020 and  49 percent of Republicans said they believed Democrats were involved in child sex-trafficking operations—a foundation of the QAnon conspiracy theory. Hundreds of 2020 election denialists are on the ballot in the midterm elections. The Republican candidate for governor in Pennsylvania, Doug Mastriano, has openly associated with a prominent antisemite and Christian nationalists. Earlier this year, Rep. Marjorie Taylor Greene spoke at a conference organized by Nick Fuentes, a white nationalist and Hitler cheerleader. Two weeks ago, Trump zapped out an antisemitic social media post. No prominent Republican complained. After Kanye West tweeted an antisemitic post, the Republicans of the House Judiciary Committee kept up a tweet declaring, “Kanye. Elon. Trump.”

How does Musk enjoy being in that company? (Two antisemites and a billionaire from South Africa walk into a bar…) As I noted in June, Musk legitimized Trump’s Big Lie and even the nutty QAnon conspiracy theory when he declared that he had voted for Republican Mayra Flores, an adherent of all that swill, who won a special House election in south Texas. Musk has amplified other baseless far-right conspiratorial notions, while complaining about “woke” progressives and claiming it is the Democratic Party that has been “hijacked by extremists.” He has been sleep-walking through the past few years.

Musk’s tweet-retort to Clinton indicates that he still resides in the bizarro universe where Democrats—not the party of the Big Lie and January 6—are the extremists and that he’s a sap for far-right disinformation. This raises questions about what will happen to Twitter on his watch—and whether it will indeed become a hellscape of right-wing propaganda and extremism. In the past few days, the anecdotal evidence has not been encouraging. Fuentes apparently spoke in in a Twitter Space the other night, ranting about Jewish people and calling for action against the US “regime.” A social media research group found that after Musk’s absorption of Twitter, the use of the n-word jumped five-fold on the site. In response to that LeBron James tweeted, “I don’t know Elon Musk and, tbh, I could care less who owns twitter. But I will say that if this is true, I hope he and his people take this very seriously because this is scary AF. So many damn unfit people saying hate speech is free speech.”

I dont know Elon Musk and, tbh, I could care less who owns twitter. But I will say that if this is true, I hope he and his people take this very seriously because this is scary AF. So many damn unfit people saying hate speech is free speech. https://t.co/Sy0jvXIBnC

It’s too soon to tell whether Musk’s takeover of Twitter will lead to a greater spread of extremism and disinformation. Perhaps his financial partners—including a Saudi fund—will prevent him from turning the site into a kingdom of hate, bigotry, and ignorance, for that will likely drive away users and alienate advertisers. It’s possible, though, Musk will reshape Twitter into a Fox-like entity. Rupert Murdoch’s disinformation shop does make a ton of money.

It might be easy for some to dismiss concerns about the future of Twitter. As an avid tweeter who has used the site to promote my journalism, to meet sources, to make dear friends, and to gather subscribers to my newsletter (people like you!), I am worried. But the fate of Twitter is intertwined with the larger issue of the state of our national discourse. Musk calls himself a free-speech absolutist and says he acquired Twitter so we would have “a common digital town square, where a wide range of beliefs can be debated in a healthy manner.” That sounds good—but it’s tough to achieve. The key word here is “healthy.” A healthy debate does not include people running through the square chanting the n-word, inflaming antisemitism, or purposefully spewing false information and conspiracy theories to skew the debate or incite violence. It does not appear that Musk realizes that. With his tweet this weekend, Musk showed us that he’s part of the problem, not the solution. And it’s a problem that extends far beyond Twitter.