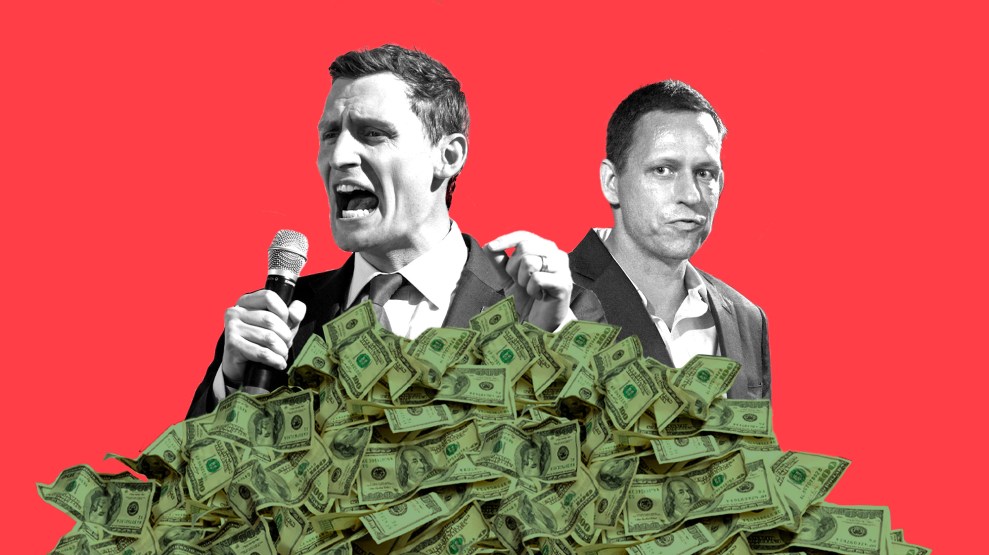 During his days as a Stanford libertarian, Blake Masters was nothing if not principled. The 36-year-old Peter Thiel protégé turned Arizona Republican Senate candidate considered voting morally indefensible, taxation theft, and nationalism a scourge. He called for open borders and full drug legalization. He was an anarcho-capitalist.

But as I reported this summer, this was not the Blake Masters that Arizona voters saw in one of the closest and most consequential Senate races in 2022. Masters entered the race as a Republican with $10 million from Thiel as the avatar of a young and highly online New Right. He called abortion “demonic.” He tweeted that “not everything has to be gay” after a bisexual Superman was announced. He plugged the Unabomber’s manifesto. More half-heartedly, he claimed Trump won the 2020 election.

After securing Trump’s endorsement, he won a competitive primary with ease. Predictably, he moderated when needed later in the cycle. Abortion was no longer a “genocide,” but something in need of “common-sense regulation.” Instead of gun-slinging campaign videos whose aesthetic reminded one of his childhood best friends of a “creepy teenage boy in his basement,” he ran ads featuring his wife and boys working around the kitchen table. But he never abandoned the idea that Americans would warm to his cold-blooded style of Stanford-knows-best intellectual combat.

But Masters was wrong. Arizonans chose Mark Kelly, the incumbent Democrat and onetime astronaut married to former Rep. Gabby Giffords. Masters’ transformation from college-aged libertarian to champion of state control did not matter so much as what both of those versions of him had in common. He was always, as Kelly put it during their only debate, one of those “guys that think they know better than everyone about everything.”

Masters was always, as Kelly put it during their only debate, one of those “guys that think they know better than everyone about everything.”

His defeat comes at great personal cost—all self-inflicted. In October, 75 former teachers, classmates, and alumni of the small private day school Masters attended in Tucson signed an op-ed in the Arizona Daily Star. “The Blake we see today is barely recognizable,” they wrote. “He also belittles those who don’t share his views, and it’s clear Blake will lead Arizona down a dark, dystopian path.”

Many of the names who’d signed the letter were familiar to me from my reporting. One was Collin Wedel, Masters’ childhood best friend and the best man at his wedding. Last November, Wedel sent a private tweet criticizing Masters. Instead of ignoring it or responding privately, Masters shared it with his all his followers. “I wish Collin well,” Masters wrote, “but freedom is worth losing friends over.” Wedel had to call the police after threatening material was put in his mailbox; his decades-long friendship with Masters ended. One year later, Masters is not just a loser, but an alienated one.

What created the current Masters? The germ was Peter Thiel. While at Stanford Law in 2011, Masters signed up for a course Thiel was teaching on “Sovereignty, Technology, and Globalization.” Thiel, the libertarian co-founder of PayPal known for trying to escape the reach of the state, had recently written that he no longer believed “that freedom and democracy are compatible.” Masters, who’d called democracy that “miserably peculiar American diety [sic]” during undergrad, found much to admire in his teacher.

The next year, Masters attended another Thiel course. This time, he took extensive class notes and began posting them on Tumblr. They went viral in the tech community the weekend of his wedding to his wife, Catherine. After law school, Masters and Thiel turned the notes into a No. 1 New York Times bestseller on startups. Masters—6-foot-3, good-looking, and more socially fluent than his awkward boss—eventually became Thiel’s chief of staff.

It was under Thiel’s tutelage that Masters went from championing Ron Paul to celebrating Lee Kuan Yew, the late Singaporean dictator who oversaw perhaps the greatest economic transformation of the 20th century while also silencing, bankrupting, and imprisoning his critics. In Silicon Valley’s lexicon, Lee was the founder of a startup that happened to be a nation. And as Thiel made clear in the lectures Masters documented, startups were monarchies. We just didn’t call them that, Thiel explained, because “anything that’s not democracy makes people uncomfortable.”

Some of the coverage of Masters has portrayed his evolution as simple hypocrisy. It is better to understand it as a product of growing up. Masters’ newfound affinity for the state came out of his youthful desire to be free of it. His old libertarianism was premised on the possibility of conversion. If he just posted enough, people would see the errors of their ways. So, he spent college nights sending missives to forums and listservs.

Instead of winning over friends, his insistence alienated them. “It became difficult to have meaningful conversations with him,” one of his former roommates told me. “We were like, ‘Dude, Ayn Rand is supposed to be a phase.’”

Thiel and his friend Yarvin provided a way out. What if persuasion were replaced by power? What if freedom were secured not through escaping to floating colonies in the ocean, as Thiel had once suggested, but by taking control at home? Wasn’t that the path forward for the intellectually mature? Masters decided it was.

Masters mused about how the Antichrist was not necessarily a person, but potentially a set of ideas. The globalist ideology threatening to usher in “Global Communism” was a “pretty good candidate” in his view.

What frightened Masters was that so few of his fellow elites agreed. He often claimed that America could soon cease to exist if Republicans lose the 2022 and 2024 elections. In its place, he feared there could be a one-world state in which the left hunts down enemies and freezes their bank accounts. He mused about how the Antichrist was not necessarily a person, but potentially a set of ideas. The globalist ideology threatening to usher in “Global Communism” was a “pretty good candidate” in his view.

To hold back the Antichrist and the apocalypse it presages, Masters argued the right would need to go beyond traditional means of limiting the left’s power. At times, he talked up a plan to Retire All Government Employees dreamed up by Yarvin. J.D. Vance, another former Thiel employee who will soon join the Senate thanks to at least $15 million from his old boss, has said Trump’s top priority in 2025 should be to fire “every civil servant in the administrative state” and “replace them with our people.” When the Supreme Court deemed the move blatantly illegal, Vance argued Trump should ignore the ruling.

Vance, the Hillbilly Elegy memoirist, painted this as a class war waged by the middle class. Despite chasing Yale Law with venture capitalism, Vance portrayed himself as the candidate of the workers NAFTA forgot. Masters never called himself a populist.

The goal was to seize power by yoking a fundamentally elitist project to the grievances of everyday Republicans. Most Arizona voters almost certainly had no idea how unusual Masters’ ideology really was. The main topic at the debate was the border—not Yarvin and internet monarchists. But Arizonans clearly sensed that something was off. They preferred the Democrat who went to space. They were normal.