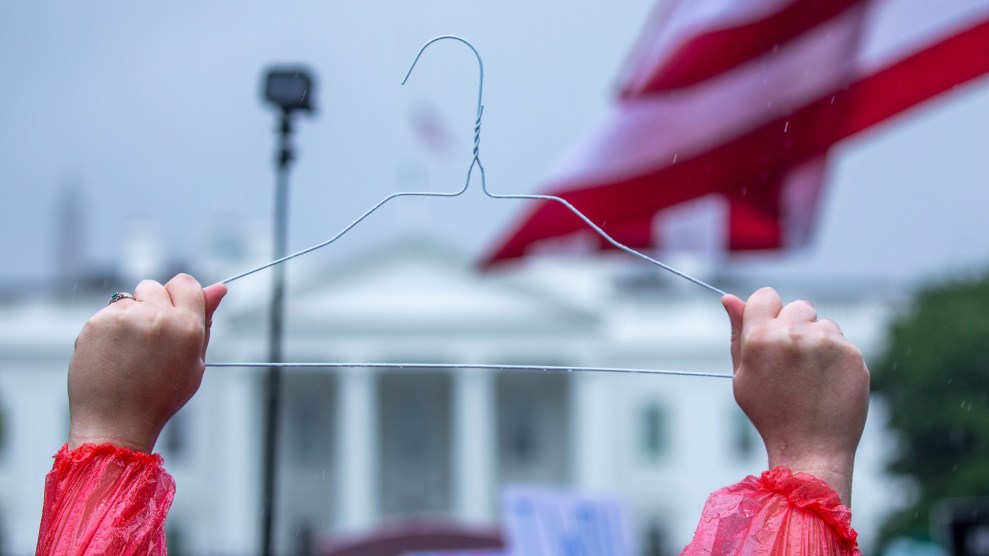 The narrative of the midterm elections goes something like this: the Supreme Court energized Democrats when it overturned Roe v. Wade in June. But since then, other issues, including inflation and crime, have drowned out abortion rights and will help Republicans win races across the country.

The concern that voters would forget about abortion rights when they head to the polls on Tuesday prompted three women to interrupt oral arguments at the Supreme Court last week to urge women to vote in the midterms. The interruption, which happens rarely at the nation’s highest court, briefly made headlines. The three women spent the night in a Washington, DC jail before they were released. Days later, one of them was back home in Arizona, helping Democrats remind voters that in these midterm elections, abortion access and other rights for women are on the ballot.

On the Saturday morning before the election, activists with the community organizing group Living United for Change in Arizona (LUCHA) were setting up chairs in a midtown Tucson parking lot outside the group’s local headquarters ahead of a canvassing event. One of the first people to arrive was Rolande Baker, 71. She walked up in a t-shirt emblazoned with the promise “I will aid and abet abortion” in pink letters. In her hand was the lawsuit the United States had filed against her for interrupting the Supreme Court last week, charging her with two violations of federal law for disrupting the court and the administration of justice. (Actually, it was the identical lawsuit filed against one of the other protesters as their paperwork had gotten mixed up.) “You went to jail?” one of the organizers asked Baker. She nodded. She said she had just arrived home to Tucson the night before.

When the canvassing event began, multiple speakers addressed a small crowd gathered to eat, listen to music, and text their friends and family to urge them to vote. Baker, who walks with a cane, stood before the crowd and told the story of going to Washington, DC to protest at the Supreme Court.

A retired teacher and political activist, the issue of abortion has galvanized Baker this year, she said. When Baker was 19, she told the gathering, she drove from Indiana to New York, where abortion was legal, to end a pregnancy. When the abortion provider learned she was from Indiana, she asked Baker if she would drive other Indiana women to New York, and Baker agreed. She agreed and made a few trips back to New York to help other women get abortions.  Decades later, when activists from a group called End the Filibuster invited her to Washington, DC to interrupt the Supreme Court, she made yet another trip east. Her only regret, she says, was that in the name of her cause she had to interrupt a lawyer who had worked so hard to argue before the justices. “I know what it was like prior to ’73” when Roe v. Wade legalized abortion, she told me. “I know what it’s like now. That’s why I wear this shirt: ‘I will aid and abet abortion.'”

Another speaker at the canvassing event, Amy Fitch-Heacock, spoke about her work as an abortion rights advocate organizing to add a pro-abortion rights measure on the ballot in Arizona in 2024. On her t-shirt were the instructions and dosage for a medication abortion: one dose of mifepristone followed by four doses of misoprostol. Before a court put Arizona’s 1864 abortion ban temporarily on hold last month, Fitch-Heacock told the crowd, her shirt could have landed her in jail for helping women obtain an abortion. She told me she believes the abortion issue is still galvanizing Democratic voters, and recalled the loud cheers for abortion rights at a rally with former President Barack Obama in Phoenix last week.

The issue of abortion will remain a mystery until the polls close on Tuesday: Will the abortion issue carry people, particularly women, to the polls and sway them to vote for Democrats? Or has the issue been supplanted by other priorities in voters’ minds? The Supreme Court turned the issue of abortion rights to the states, which put abortion access in Arizona on the ballot. The state currently has a 15-week ban in place but a more draconian territorial law from 1864, which outlaws abortions with virtually no exception, may be restored as well.

Sitting in the shade, exhausted from her trip to DC and time in jail, Baker seemed less optimistic. She said she was worried about this election, and about the country’s future. “It’s for all of my grandchildren,” she said of her activism. “Why are we going back to 1864? What is this country doing?”