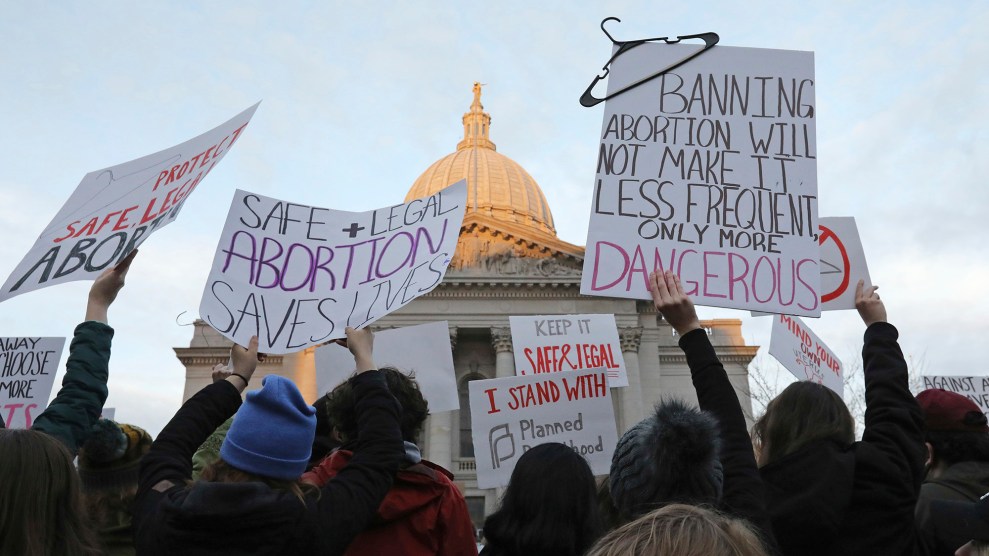 For three and a half years, Wisconsin Gov. Tony Evers’ veto pen was the only thing keeping Republican legislators in the state from getting everything on their anti-abortion wish list. When they tried to ban abortion based on fetal anomalies last year, Evers was there to veto it. Block Medicaid funding for Planned Parenthood? Evers vetoed that, too. And he shot down a bill that would have required doctors to tell patients they could reverse a medication abortion—a claim the American College of Obstetricians and Gynecologists says is “not based on science.”

Then the Supreme Court overturned Roe v. Wade. Suddenly, the Wisconsin legislature didn’t have to lift a finger. State law appeared to automatically default to an 1849 statute that made performing abortions a felony, with no exceptions for rape or incest—only a narrow allowance to “preserve the life of [the] mother.” The state’s abortion clinics, afraid their doctors would be jailed, halted services virtually immediately. Doctors began referring people out of state to get abortions.

In Wisconsin, by some measures the most liberal of the 13 states now operating under a zero-week abortion ban, providers and pro-choice advocates haven’t simply been sitting on their hands since June. They see a path to restoring full reproductive rights in Wisconsin via the courts. Their plan, however, hinges on the upcoming midterms. “The stakes couldn’t be higher,” says Tanya Atkinson, president and CEO of Planned Parenthood Advocates of Wisconsin, whose political fund has spent nearly $1 million on the November midterms since June. “This election is absolutely about who gets to have power and control over our bodies.”

“I don’t think it’s a coincidence that the playbook has been, restrict voting rights, then implement policies that are deeply unpopular, like restricting access to abortion care.”

Like most US adults, around 3 in 5 Wisconsin voters support pregnant people’s right to get an abortion in all or most cases. Yet unlike neighboring Michigan, where voters will choose whether to enshrine abortion rights in their state constitution this November, Wisconsin has no ballot initiative process by which residents can bypass the state legislature to put the question directly to voters. And there’s a slim chance that the midterms will result in a Democrat-majority legislature willing to either repeal the 1849 law or pass a new one legalizing abortion. That’s a result of Wisconsin’s partisan redistricting process, which has placed the House and Assembly under firm Republican control since 2010, despite the state’s close political divisions (in 2020, voters were split almost exactly between Donald Trump and Joe Biden). And this year, the state supreme court endorsed new GOP-drawn legislative maps that are expected to give Republicans an even greater advantage.

“Our representative democracy really is broken when it comes to translating the people’s preferences and their voice at the ballot box into legislative seats,” says Mel Barnes, staff counsel at Law Forward, a legal nonprofit focused on protecting Wisconsin’s democratic process. “I don’t think it’s a coincidence that the playbook has been, restrict voting rights, then implement policies that are deeply unpopular, like restricting access to abortion care.”

So the November midterms are all about defense and preserving the status quo. Crucially, reproductive rights advocates need to stop Republicans from gaining a two-thirds majority in both houses—5 more seats in the Assembly and 1 in the Senate—and with it, the ability to override the veto. That’s a scary prospect during a midterm election in which Republicans are expected to win more control on both national and state levels. “During what is historically a Republican year, this can be our reality quite quickly,” says Sarah Godlewski, the Wisconsin state treasurer who ran in the Democratic primary for US Senate this year. This fall, Godlewski launched a political action committee called Women Save the Veto, backing six female Democrats running in competitive legislative districts, in the hopes of blocking a GOP supermajority.

Just as important is keeping Evers in office. The governor is currently locked in a neck-and-neck race with his Republican challenger, Tim Michels, a Trump-endorsed construction executive with a clear record of opposition to abortion. During his failed run for Senate in 2004, Michels supported giving fertilized eggs full constitutional rights. His family foundation has gifted thousands to Pro-Life Wisconsin, which advocates against “life of the mother” exceptions; it has also funded the Veritas Society, which uses location tracking to target women who go near abortion clinics with anti-abortion advertising. During the primaries, Michels called his personal position on abortion a “mirror” of the state’s 1849 law. Only in the leadup to the general election, as Evers hammered him on the issue, did Michels say he would sign a bill creating rape or incest exceptions.

If Democrats can reelect Evers and win enough seats in the legislature to avert a veto-overriding Republican supermajority, they’ll create the time and space for path number two: taking the fight to the state courthouse.

The legal cogs are already turning. In late June, Wisconsin Attorney General Josh Kaul filed a challenge to the 1849 statute, arguing that the old law conflicts with a newer law from the 1980s that permits abortion in the first and second trimesters. “Either it is lawful to provide a pre-viability abortion, or it is not,” Kaul said in his complaint, filed in Dane County Circuit Court. “Wisconsin abortion providers cannot be held to two sets of diametrically opposed laws, and the Wisconsin people deserve clarity.”

Kaul is also up for election; if he loses, a court could potentially allow an outside group to continue the case, according to Michelle Velasquez, director of legal advocacy and services for Planned Parenthood of Wisconsin. Sooner or later, the dispute over the 1849 law is expected to make it to the Wisconsin Supreme Court, which is currently controlled 4-3 by conservatives. One justice, Rebecca Bradley, wrote an op-ed in her college days comparing abortion to the Holocaust. Another, Brian Hagedorn, won his seat with backing from two anti-abortion groups. But a different conservative justice is retiring soon, and an election to replace her is scheduled for next spring. If a more liberal judge wins, it could tilt the state supreme court’s partisan balance, making a ruling in favor of abortion access more likely. Two left-leaning judges have already declared their candidacies: Everett Mitchell, from Madison, and Janet Protasiewicz of Milwaukee.

Of course, Republicans have their own plans that could stall Kaul’s lawsuit. One way is to replace the old, conflicting abortion laws with clearer, newer ones, Barnes says. Powerful anti-abortion groups are already talking about eliminating the “life of the mother” exception next term, for example. “They could enact a new criminal ban that goes farther than the 1849 ban, or institutes some of [its] terms,” she says. Even a slightly looser ban, adding exceptions for rape and incest, could accomplish the same thing. “Right now the law isn’t clear,” Velasquez says. “Really, frankly, if Gov. Evers isn’t reelected, it is very likely that we will get that clarification, but in a negative way.”

“The stakes couldn’t be higher. This election is absolutely about who gets to have power and control over our bodies.”

That’s why Atkinson says the veto’s importance “cannot be overstated.”  It’s how to stop the next Republican legislature from shoring up the tenuous 1849 abortion ban—or expanding the breadth of its reach and the depth of its penalties. Wisconsin is not the only state in this position. The current Democratic governors of Kansas, Michigan, and Pennsylvania have all used their veto power to block abortion restrictions from Republican-controlled legislatures. But all three governorships are up for grabs this November. And in North Carolina, Republicans are eyeing a legislative supermajority that would allow them to get abortion laws passed Democratic Gov. Roy Cooper.

Wisconsin pro-choice researchers and advocates point out that even if Kaul wins his lawsuit, access to full reproductive care in the state will go back the old status quo as of June 23, when abortions were provided at just four clinics operating under an onerous list of restrictions—including 24-hour waiting periods, a telemedicine abortion ban, and a block on state Medicaid funding in almost all cases. “It’s not as if we reverse Dobbs, then we’re all going to be fine,” says Jenny Higgins, a reproductive health care researcher at the University of Wisconsin-Madison. The old normal, she adds, while better than the present, is “still not consistent with accessible abortion and reproductive autonomy.”

Yet a more progressive state supreme court could do more than just invalidate the 1849 ban. It could rule that the state constitution guarantees access to abortion, protecting against future legislative attacks. Like a mini Roe v. Wade, such a ruling could restore a right to abortion, if only within Wisconsin’s borders. “The best way would be for there to be a state constitutional protection,” Velasquez says. “That’s where the court cases could really help reach our goal of protecting access for Wisconsinites for the long term. So that we don’t have this back and forth of laws depending on who is elected.”

What would an ideal future look like for abortion care in Wisconsin? “Dream with me for a second,” says Kristin Lyerly, a Green Bay OBGYN who’s volunteering for the Evers campaign. “You could just go to your doctor when you have a problem related to a pregnancy—your fertility, miscarriage—and then your doctor could counsel you using evidence and science and compassion. Then you could make a decision with the support of the people who you listen to—faith leaders, your family. And that decision could be implemented with your doctor instead of having to send you somewhere else. Wouldn’t that be the best way to take care of someone?” In November, we’ll have a better idea if Wisconsin voters feel the same.