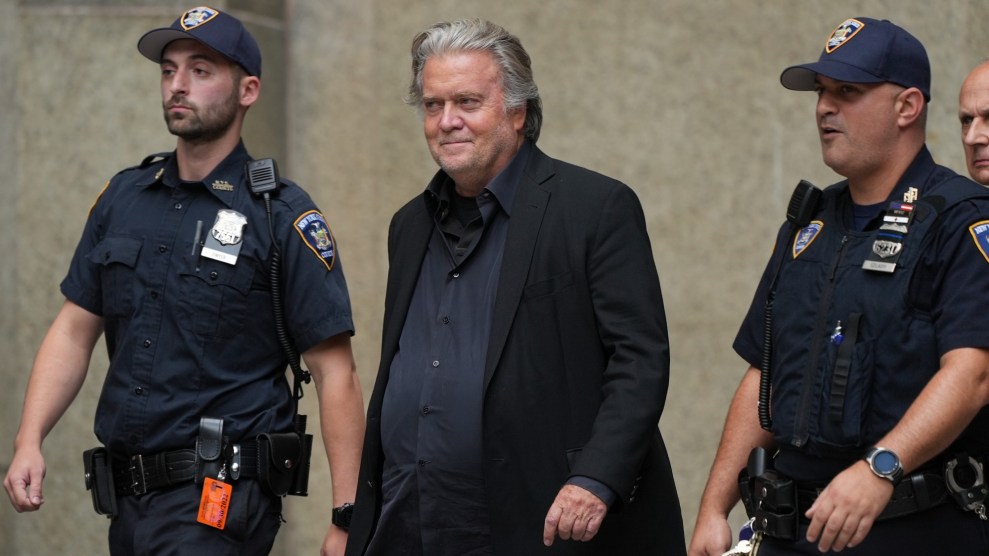 The Justice Department wants Steve Bannon imprisoned for six months and fined $200,000 for contempt of Congress, a charge resulting from Bannon’s refusal to cooperate with the House’s January 6 committee.

In a sentencing memo filed Monday ahead of Bannon’s October 21 sentencing, prosecutors said that Bannon had refused to disclose his finances as part of the sentencing process, which, they argued, means that he should be required to pay the largest possible fine for his crime. Prosecutors also said that Bannon and his lawyer, Robert Costello, lied about receiving an executive privilege claim from Donald Trump.

Following his sentencing this coming Friday, Bannon could be the first high-level Trump adviser sentenced to prison in connection with the January 6 investigations, though the charges Bannon was convicted on don’t relate directly to his efforts to overturn the election. Bannon told associates on October 31, 2020, that he had a hand in a Trump “strategy” to falsely claim victory on election night—while votes were still being counted—and to make baseless allegations of fraud. Bannon used his podcast to repeat election fraud lies and to urge Trump supporters to go to Washington on January 6, predicting “all hell is going to break loose.” He was also one of various Trump advisers gathered on January 6 in the Willard Hotel “to persuade members of Congress to block the certification of the Electoral College vote,” prosecutors noted in their sentencing memo.

Following his contempt conviction in July, Bannon was required to take part in a standard pre-sentencing investigation by the court’s probation office, which usually includes assessing a defendant’s ability to pay a fine. Bannon “freely answered questions about his family, professional life, personal background, and health,” prosecutors noted. But he “refused to disclose his financial records, instead insisting that he is willing and able to pay any fine imposed, including the maximum fine on each count of conviction,” they wrote. That means Bannon is choosing a $200,000 fine over detailing his finances to the government.

Bannon since 2017 has worked as an adviser to exiled Chinese mogul Guo Wengui, helping Guo launch nonprofits and mostly Chinese-language news organizations that have championed false claims about Covid and the 2020 election. While Axios has reported that Bannon was paid $1 million for a year of work for Guo in 2018 and 2019, Bannon’s financial ties to Guo remain murky. In September, New York prosecutors charged Bannon with money laundering for allegedly diverting donations made to a nonprofit group called We Build the Wall. Federal prosecutors charged Bannon with similar crimes in 2020. Trump pardoned Bannon before he faced a federal trial over that matter.

After the January 6 committee subpoenaed Bannon in September 2021, he flatly refused to comply, claiming his testimony was subject to executive privilege, even though he had not worked in the White House since 2017. Prosecutors said Monday that after he accepted service of the subpoena, Bannon’s lawyer, Robert Costello, reached out to Trump’s lawyers, seeking a letter that would allow Bannon to cite an executive privilege claim and refuse to cooperate. A Trump lawyer, Justin Clark, sent a letter that stopped short of saying that. Clark wrote that the subpoena sought records that were “potentially protected from disclosure by the executive and other privileges” and said Bannon should decline to produce records “where appropriate.” But Costello acknowledged in a subsequent message to Clark that Trump had not actually asserted privilege.

That is because Trump did not believe Bannon had immunity from testimony, Clark told prosecutors in a June 2022 interview, a summary of which prosecutors attached to their memo Monday. Clark said he made it clear to Costello in a phone call that he was not advising Bannon to completely refuse to cooperate—but Bannon did so anyway. Costello nevertheless told the committee in an October 13 letter that “President Trump is exercising his executive privilege” and that, on that basis, Bannon was ignoring the subpoena.

Publicly, Bannon has used his subpoena, the contempt charge, and the July trial to rail against the January 6 committee and the Justice Department. He pledged last year to make his trial  into “the misdemeanor from hell” for the Biden administration. But his effort to call committee members as witnesses went nowhere. He was rapidly convicted after a quick trial.

In their sentencing memo, prosecutors said Bannon’s “statements prove that his contempt was not aimed at protecting executive privilege or the Constitution, rather it was aimed at undermining the Committee’s efforts to investigate an historic attack on government.”