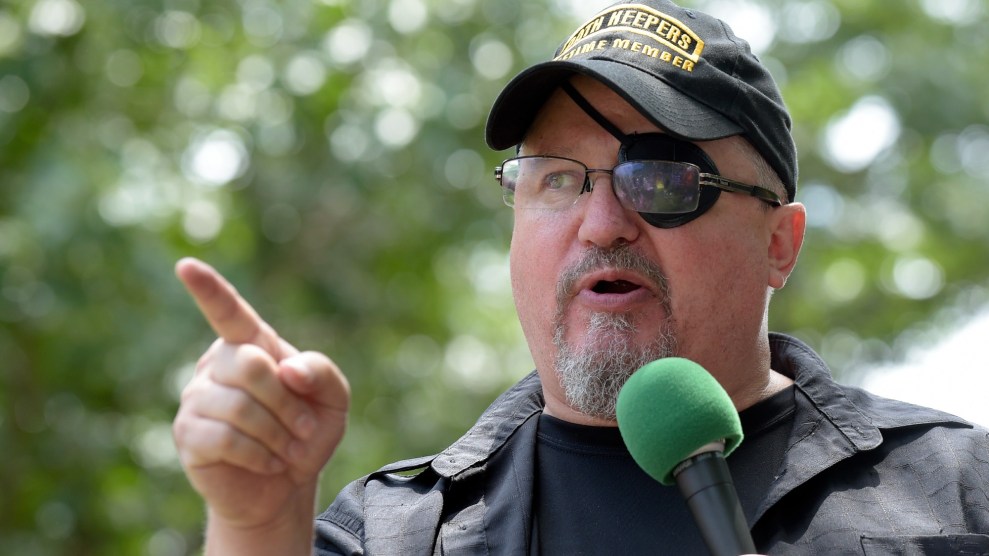 The Justice Department’s case against five members of the Oath Keepers militia group is so extensive that it is expected to take a month lay out. But it is also pretty simple: Members of the far-right militia came to Washington on January 6 with a plan to use violence to keep Donald Trump in power.

During the first day of the trial, we got a glimpse of how the DOJ intends to prove that: by citing the Oath Keepers’ own words—especially those of its founder, Stewart Rhodes. “My only regret is that they should have brought rifles,” Rhodes said in a previously unreported recording from January 10 played by prosecutors Monday. “We aren’t getting through this without a civil war,” Rhodes wrote in an Oath Keepers chat two days after the election.

On its face, the Oath Keepers trial is about charges against five defendants for conspiring to obstruct Congress, and other crimes. But it will also help determine what narrative of January 6 prevails. While prosecutors have charged more than 900 people with crimes related to the January 6 riot on the Capitol, the Oath Keepers trial is their first effort to prove that a plan to use violence helped cause that attack.

“These defendants concocted a plan for an armed rebellion to shatter a bedrock of American democracy,” Assistant US Attorney Jeffrey Nestler, the lead prosecutor in the case, said in his opening statement on Monday. “They banded together to do whatever was necessary—up to and including force—to stop the transfer of power from President Donald Trump to president-elect Joe Biden.”

The Oath Keepers’ defense is also fairly straightforward. They claim members of the group came to Washington to help protect speakers at events supporting Trump and with the hope that Trump would invoke the Insurrection Act, a law that allows presidents to use emergency measures to put down rebellions, defense lawyers said.

“There was no plan,” Philip Linder, one of the lawyers for Rhodes, said in his opening statement. “They were there to work security.”

“The Oath Keepers are basically a peacekeeping force,” he added.

The five defendants collectively are pushing the argument, also advanced by Trump and his backers, that the federal response to January 6 has been a massive overreaction, with nonviolent protestors persecuted. “What happened to these people is an absolute outrage,” Fischer said.

Fischer said Caldwell, who did not storm the Capitol, but who is charged with joining in the seditious conspiracy, was in Washington on January 6 for “a date with his wife.” Jonathan Crisp, a lawyer for Jessica Watkins, another defendant, said Watkins was a “protest junkie” who went to DC in hopes of acting as a medic. Crisp also said Watkins’ identity as a “transgender woman” helps to explain her actions. “A lot of things she did that day was to try to fit in, good and bad,” Crisp said.

Lawyers for several of the defendants, including Rhodes, Meggs, and Harrelson, have received financial support from a nonprofit set up by Sidney Powell, the prominent pro-Trump attorney who pushed false and outlandish conspiracy theories about voter fraud in the wake of the 2020 election prior to January 6, as Mother Jones has reported. Prosecutors have argued those payments could create conflicts of interest for defense lawyers. Either way, such payments might also create incentives for the lawyers to engage in broad defenses of the January 6 attacks.

But the government appeared set to pierce those claims using Rhodes’ own words.

In a late December 2020 message, Rhodes explicitly said that he did not plan to wait for Trump to call the group into action, stating: “He needs to know that if he fails to act, then we will.”

Nestler also played a recording of an online meeting from November 2020 in which Rhodes told members of his group that his claim that Quick Reaction Force set up in case Trump invoked the Insurrection Act was “our official position.” Rhodes continued: “The reason why we have to do it that way is because that gives you legal cover.”