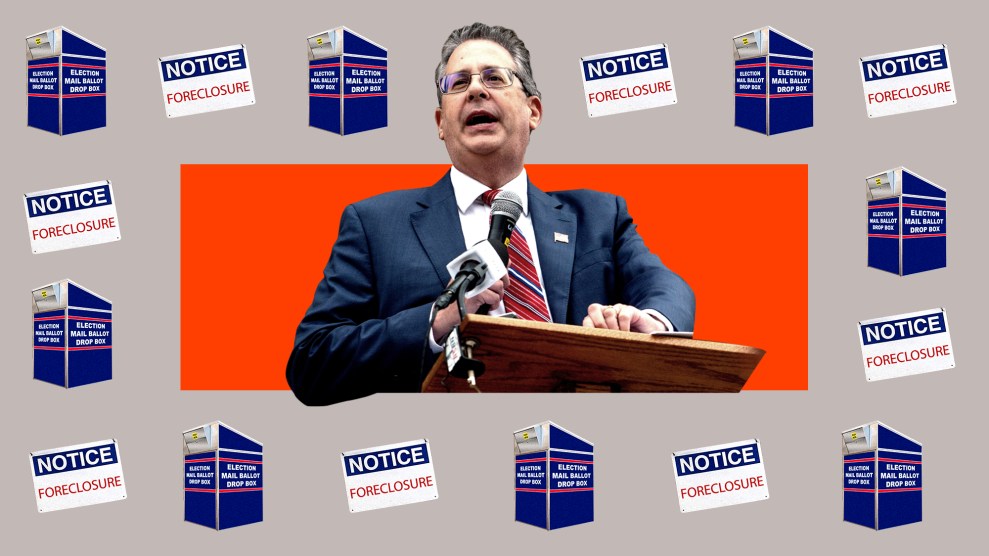 If Matthew DePerno wins his race to unseat Michigan’s Democratic attorney general in November, he’ll become the state’s top lawyer. He will have a staff of more than 500 people, and his duties will include everything from investigating voter fraud to “protecting consumers and addressing illegal business practices.” But as a practicing attorney, DePerno—a vocal conspiracy theorist and election denier—has been accused of improper behavior in court documents filed by clients, a law firm he hired, and even the current AG. And a Mother Jones examination of years of legal filings involving DePerno suggests that he has routinely engaged in aggressive tactics to collect legal fees, while sometimes leaving his clients dissatisfied with the quality of his legal representation.

DePerno describes himself on Twitter as a constitutional attorney, and he’s based his campaign on the issue of election fraud. A lawsuit DePerno filed seeking to audit the 2020 results in Antrim County, Michigan, caught the eye of Donald Trump, who eventually endorsed DePerno in the primary. Voter fraud is one of just five topics listed in his campaign website’s issue page. He has promised to “prosecute the people who corrupted the 2020 election and allowed fraud to permeate the entire election system”—including Michigan’s Democratic secretary of state.

Deperno has had a number of legal disputes with his own clients and other attorneys.

DePerno himself appears to be in legal jeopardy related to the aftermath of the 2020 election. The office of the state’s incumbent AG—Democrat Dana Nessel—recently asked for a special prosecutor to investigate whether DePerno had participated in a scheme to illegally access voting machines in an effort to prove the race had been stolen from Trump. According to Nessel’s filing, a Republican state representative had told a county official that the legislature was conducting an investigation into voter fraud. Then, after gaining access to multiple tabulators used to count votes, “tests” were conducted on the equipment. DePerno had been present during those tests, the filing alleged, and he was “one of the prime instigators of the conspiracy.” A special prosecutor was ultimately appointed and has said that additional investigation is needed before he can make a determination on the case. In a statement, DePerno denied the allegations.

Even before the 2020 election crisis, however, DePerno’s legal work had generated controversy. According to the New York Times, Michigan’s Attorney Grievance Commission has received at least five requests to investigate DePerno’s actions. DePerno told the Times that none of the complaints had resulted in disciplinary action and that “any person at any time can file any garbage they want” with the commission. In a letter to a law firm that had previously  represented DePerno, DePerno acknowledged the existence of two specific grievance commission investigations, one of which related to his Antrim County litigation. DePerno’s letter, which was first reported by the Detroit News, called those probes “complete nonsense.”

As a practicing tax attorney, Deperno has had a number of legal disputes with his own clients and other attorneys, and he’s faced complaints about his aggressive billing practices. In one instance, Ronald and Cathleen Moffit, a couple who were clients of DePerno, had seen a potential insurance payout reduced because of an outstanding debt to the IRS. The Moffits allegedly asked DePerno to “contact the IRS” to prevent their payment from being garnished, according to a request for investigation later filed with the grievance commission by William Buhl, a retired judge who was retained by the couple’s new lawyer to serve as an expert witness in a subsequent malpractice suit they filed against DePerno. Buhl alleged that DePerno had instead contacted the insurance company and had urged the couple to sue the insurance company.

In the middle of legal proceedings with the insurance company, DePerno allegedly had the clients sign a new payment agreement, wherein their two properties would be held as collateral in the event that they didn’t pay their legal bills. Buhl said that he had “never seen” an arrangement like that before, according to Bridge Michigan.

Ultimately, Buhl’s grievance filing alleges, the Moffits received less money from the insurance company than the insurance company had initially offered—and DePerno’s bill was more than the insurance payout. In attempting to collect the fees, DePerno allegedly foreclosed on the clients’ properties, the filing continued. One of the clients also alleged in a sworn affidavit that DePerno had grabbed him by the shirt, a claim that DePerno described to Bridge Michigan as “outrageous.” DePerno eventually reached a settlement with the Moffits in their malpractice suit.

Legal experts told Mother Jones that while it isn’t necessarily improper for attorneys to ask for real estate collateral from their clients, it is fairly unusual.

“Although lawyers can take security interests in clients’ property, not very many do,” said Peter Joy, a professor at the Washington University in St. Louis who studies legal ethics. “It seems like [DePerno] gets into these agreements after he’s already signed up the client, so that he’s already representing the client, he gets into the case, and now he pulls out the mortgage documents.”

Typically, Joy said, if lawyers secure their legal fees using their clients’ property, they would have clients agree to the payment arrangement before taking on the client. “That gives the client an opportunity, free from there already being a fiduciary relationship…for the client to make a judgment about that, or maybe seek a second opinion.”

DePerno did not respond to detailed questions from Mother Jones.

The Moffits were not the only clients with whom DePerno used security agreements. In a different case, an outside law firm DePerno had hired sued him for allegedly failing to pay $15,985.20, plus other fees and interest, according to a complaint reviewed by Mother Jones. In his response to the complaint, DePerno alleged that “it is clear that [the law firm was] padding the bill. This is unethical.” He ultimately settled with the firm for $7,000.

In a court filing in that case, DePerno stated that he had hired this firm to enforce a fee agreement against a group of clients and to foreclose on the clients’ properties. DePerno also appeared to be familiar with this type of security agreement, to the point where he claimed that his own firm, DePerno Law Office, had instructed the firm he’d hired as to how the clients would likely respond to these efforts.

In bankruptcy proceedings for another client, Christine Skandis, it emerged that DePerno had used a variety of agreements that secured DePerno’s legal fees with property owned by Skandis, including a mortgage that entitled DePerno to foreclose on her home if she failed to pay him. According to a motion DePerno filed with the bankruptcy court, he had represented Skandis between August 22, 2018, and August 27, 2019. Just as with the Moffits, DePerno signed the mortgage agreement with Skandis well after he had begun to represent her—in this instance, “on or about” June 29, 2019.

In some cases, allegations made against DePerno by his former clients have been rejected by courts.

Skandis, for example, claimed in a filing that she had been “coerced” into signing the security agreements and the mortgage. Skandis also accused DePerno of having “fabricated false claims/invoices of her owing any amount of money to Deperno.” The judge in the bankruptcy case denied Skandis’ filing. DePerno wrote in an earlier filing that Skandis had attempted to “discredit [DePerno] because he brought to light so much of Debtor’s fraud and concealment” and that Skandis had attacked DePerno using “slander and misinformation.” In an email, Skandis told Mother Jones that “there was no fraud or concealment on my behalf.”

A different DePerno client alleged that DePerno had billed for legal representation that the client did not ask for. In a 2009 case, this former client testified that in a prior court case, he had “asked DePerno to withdraw as counsel on two occasions in early December 2008…and that DePerno billed for work completed after that time.” The judge rejected the client’s assertions, citing “the unlikelihood that an attorney would engage in the substantial and difficult amount of work involved in appealing [the client’s] case in the Michigan courts without being instructed to do so.”

A separate former client alleged in a 2006 lawsuit that DePerno had claimed that he would settle this client’s federal tax liability for “pennies on the dollar,” but that DePerno had failed to reach any sort of offer from the IRS after three years of work, according to court records reviewed by Mother Jones. DePerno denied having used the phrase “pennies on the dollar,” and the suit was eventually dismissed.

The complaints against DePerno don’t appear to have phased his biggest supporter, Trump. “He is really tough. And that’s just what you need,” the former president said at a rally. “He is a killer. We need a killer. And he’s a killer in honesty. He’s an honest, hard-working guy who is feared up here.”