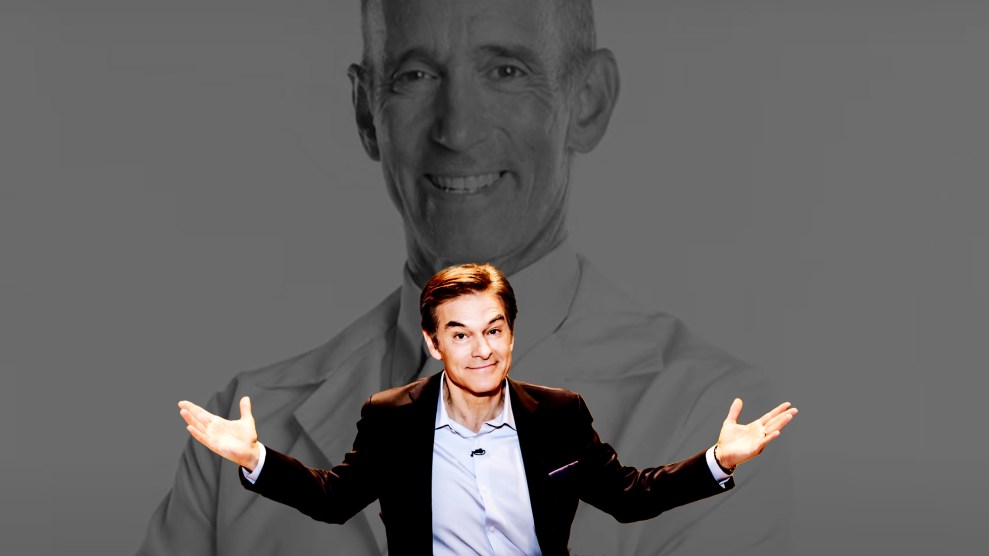 In February 2021, as the new vaccines that would tame the Covid pandemic were being released to the general public, an article sourced to an osteopath in Cape Coral, Florida, claimed that the vaccines were “a medical fraud” and did not counter the disease. The shots, it said, “alter your genetic coding, turning you into a viral protein factory that has no off-switch.”

The man pushing these false statements was Joseph Mercola, a pioneer of the anti-vaccination movement, who had a history of Covid denialism, having asserted that there was no pandemic and that Covid was a “scam.” As he pushed falsehoods about the vaccines, the FDA sent him a warning letter for promoting unapproved and unproven treatments for Covid—such as a vitamin C, vitamin D, and other products—in possible violation of federal law. In a report released in March 2021, the Center for Countering Digital Hate assigned Mercola the top spot on its “Disinformation Dozen” list of  people “responsible for the bulk of anti-vaxx content shared or posted on Facebook and Twitter.” A few months later, the New York Times cited the center’s report and dubbed Mercola the “most influential spreader of coronavirus misinformation online,” noting he had posted over 600 articles on Facebook “that cast doubt on Covid-19 vaccines” and had reached “a far larger audience than other vaccine skeptics,” with his claims echoing across Twitter, Instagram, and YouTube. (In an email to Mother Jones, Mercola maintained the “Disinformation Dozen” paper was a “fake report” tied “directly into dark money politics” and was “debunked by Facebook, was not a peer reviewed primary reference, and was not validated in any way.”)

Oz vouched for Mercola, hailing him as a “pioneer in holistic treatments” and a person “your doctor doesn’t want you to listen to,” a man who “is challenging everything you think you know about traditional medicine and prescription drugs.”

Yet a few years earlier, Dr. Mehmet Oz, now the Republican candidate for US Senate in Pennsylvania, had validated Mercola and boosted his audience, helping this anti-vaxx crusader expand his ability to disseminate false and possibly dangerous information.

In 2009, after Oz had appeared on Oprah Winfrey’s talk show dozens of times, Winfrey set him up with a syndicated television show of his own on which he covered assorted health issues. It was a success. But four years later, in a lengthy profile of Oz, New Yorker reporter Michael Specter noted that Oz had “consistently” booked “guests with dubious authority” to challenge conventional medicine. That included Mercola, who had quit practicing as a doctor to run a highly profitable business selling alternative health products and dietary supplements. The FDA had warned Mercola for making false claims about products that supposedly combat cancer and heart disease. And he had a rather spotty record in other ways. He had claimed avian influenza was a hoax, contended that vaccines are dangerous and cause AIDS, and promoted an Italian doctor who said cancer is a fungus that can be treated with baking soda. (In 2018, this doctor was sentenced to five and a half years in prison on a manslaughter charge for treating a brain cancer patient with this supposed remedy.) Yet Oz vouched for Mercola, hailing him as a “pioneer in holistic treatments” and a person “your doctor doesn’t want you to listen to,” a man who “is challenging everything you think you know about traditional medicine and prescription drugs.”

In an odd comment to Specter, Oz said, “If I don’t have Mercola on my show, I have thrown away the biggest opportunity I have been given.”

Oz has long come under fire for championing unproven therapies and products—in other words, quack nostrums—on his show. During a 2014 appearance before a Senate committee, then-Sen. Claire McCaskill (D-Mo.) lambasted him for hawking “miracle” and “magic” weight-loss cures: “You know it’s not true. So why, when you have this amazing megaphone, do you cheapen your show like that?” That same year, a British medical journal released a report saying that  “no evidence could be found” for about a third of the medical recommendations Oz had presented on his show.

In questioning Oz’s boosting of quackery, his critics have pointed to his embrace of Mercola, who in 2017 filed an affidavit saying he was worth over $100 million. In 2011, Steven Novella, the founder of Science-Based Medicine, a website and blog that takes a dim view of alternative medicine and seeks to expose medical scams, lashed out at Oz for his relationship with Mercola:

Oz has recently gone beyond coyly flirting with pseudoscience by directly promoting Joseph Mercola—a notorious internet doctor who himself promotes all sorts of pseudoscience and fear-mongering on his website. In an interview on his show, Dr. Oz praises Mercola while refraining from directly mentioning any of the more controversial positions that he takes… [T]he information on Mercola’s website is not science-based. Mercola frequently engages in rank fear-mongering—promoting every preliminary study that may suggest a possible connection as if it were a proven health risk.

I have been most critical of Mercola for his anti-vaccine stance. He recently joined with anti-vaccine activist Rosemary Fischer to attack the flu vaccine. Last year he was warning his readers away from the H1N1 vaccine citing fears that it would cause an epidemic of Guillaine-Barre Syndrome (GBS). This epidemic never appeared—despite active monitoring, there were no excess cases of GBS due to the H1N1 vaccine. Mercola never bothered to correct his prior fear-mongering. He just went on to the next one—warning his readers about a connection between vaccines and narcolepsy. However this fear did not hold up to replication either….In short, in my opinion Mercola is a dangerous medical crank.

Novella argued that Mercola’s “website does have a body count. He has scared readers away from vaccination, a proven safe and effective preventive measure.” And he slammed Oz hard: “If there were any doubt as to the intellectual integrity and scientific legitimacy of Dr. Oz as a media doctor, he has erased all doubt with this interview of Mercola… It was, if anything, shameless promotion.”

In a 2013, commentary assailing Oz in Science, which is published by the American Association for the Advancement of Science, Derek Lowe zeroed in on Oz’s connection to Mercola, noting Mercola’s website is “a trackless fever swamp of craziness.”

In 2014, Steven Salzberg, a professor of biomedical engineering and computer science at Johns Hopkins University and a columnist for Forbes, penned a similar critique of Oz’s promotion of Mercola:

Why has Dr. Oz repeatedly had Joe Mercola on his show? This is a tough one. Does Oz believe that autism is caused by vaccines, something Mercola has claimed repeatedly over the years? Does he understand that Mercola’s anti-vaccination campaign leads to genuine harm? Does he know that the FDA has repeatedly issued warnings to Mercola to demand that he stop making false claims about his vitamins and supplements, as Chicago Magazine reported?

Or does Dr. Oz keep inviting Mercola back because he knows Mercola has a big audience that will increase his own viewership?

Salzberg noted that by booking Mercola on his show, “Oz is giving him free publicity… And whether or not Oz agrees with Mercola, he is helping to give credibility to Mercola’s wildly inaccurate and dangerous anti-vaccine claims.”

Asked by Mother Jones about this criticism he has received, Mercola did not address the specific remarks and replied, “My response to the name-calling is that our healthcare system is a disaster because of extreme pharmaceutical corruption. The industry influences politicians and media alike. Big Pharma will do anything to prevent change as Americans continue to suffer through horrific guidance from the government, which is deep in the pockets of industrial agriculture and the drug industry.”

With Mercola’s standing as an anti-vaxxer well in place before Covid—and his status as a health advocate legitimized by Oz—he was well-positioned to become a leading purveyor of misinformation that could dissuade people from obtaining the Covid vaccination. Mercola is “a master of capitalizing on periods of uncertainty, like the pandemic,” Kolina Koltai, a University of Washington researcher who studies online conspiracy theories told the New York Times. Mercola told the newspaper that criticisms of him were political.

The Oz campaign did not reply to emails with questions regarding his relationship with Mercola.

In emails to Mother Jones, Mercola noted that he had “no personal or business relationship with Dr. Oz.” He also defended his promotion of vitamin D as a “natural remedy” for Covid, asserting it is “scientifically proven.” He said, “I don’t promote any products; I simply share clinical research studies supporting nutritional and health benefits. The FDA was asked for a meeting to discuss their [warning] letter, and they never followed up with me.” He claimed that the FDA and the National Institutes of Health “are both responsible for the development and leak of this virus.” Mercola contended that the federal government and major media have lied to American public repeatedly about Covid (particularly regarding vaccines and mask-wearing) and “are completely corrupted by the pharmaceutical companies.” He maintained, “Vaccine passports will be leveraged to roll out a long planned digital identification system combined with digital currencies; it will allow for complete control of transactions based on compliance and behavior.”

In the opening months of the Covid pandemic, Oz, whom Trump in 2018 appointed to a federal council on sports, fitness, and nutrition, took actions considered counterproductive by many in the public health community. On Fox News, he suggested reopening schools because doing so “may only cost us 2 to 3 percent in terms of total mortality.” After this comment drew widespread criticism, Oz said, “I misspoke.” Moreover, he repeatedly touted using hydroxychloroquine to treat Covid, though experts noted the drug was unproven in addressing the coronavirus. According to the New York Times, “Oz promoted chloroquine and hydroxychloroquine in more than 25 appearances on Fox in March and April 2020.” (Last month, CNBC reported that Oz and his wife own shares in two pharmaceutical companies that supply hydroxychloroquine.) When one study found that Covid patients treated with hydroxychloroquine were more likely to die than untreated patients, Oz stopped promoting the drug. Eventually hydroxychloroquine was shown to not yield any benefit in the treatment of Covid.

With his cheerleading for hydroxychloroquine, Oz helped distort the national public conversation about Covid. But his greater impact on the pandemic might be his previous support for Mercola. Advancing the career of the fellow who would become a top promoter of Covid misinformation—and whose efforts may have prompted many Americans to not become vaccinated and, thus, face terrible consequences—hardly meets the oath that Oz once swore: first, do no harm.