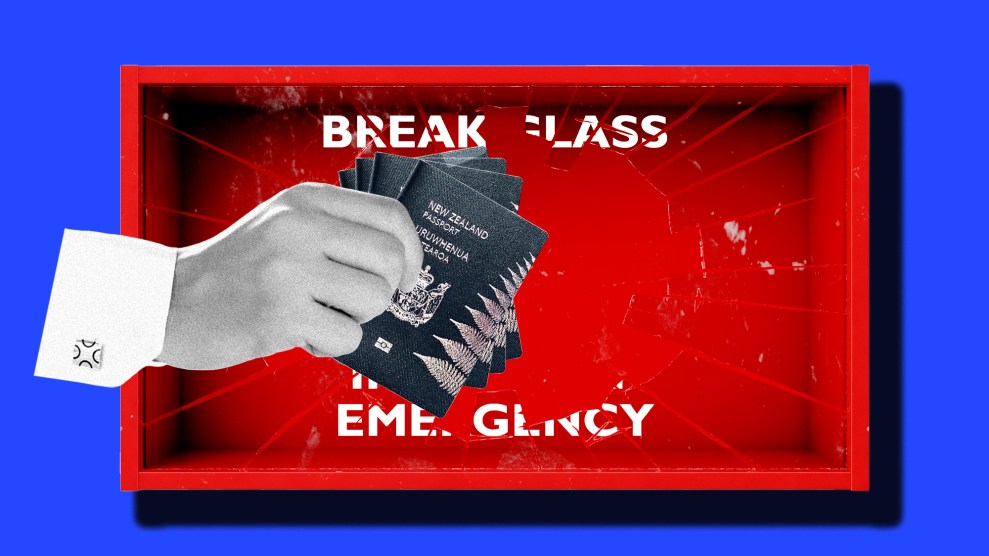 This is not a time of optimism in America. People are reeling from inflation, gun violence, partisan rancor, race-baiting, a ruthlessly divisive Supreme Court decision, the long tail of a pandemic, and the very real prospect of political violence. A significant majority of the public, polls suggest, thinks the nation is headed in a bad direction. Nearly three-quarters of the people NBC News polled in August said as much, and more than a third predicted that things would get worse over the next five years.

Our societal dysfunction has progressed to the point where many well-heeled Americans are looking for an escape hatch. And David Lesperance’s phone is ringing off the hook.

Lesperance, whom I profiled for Mother Jones in 2017, is a Canada-born lawyer who has specialized in arranging foreign citizenships for extraordinarily wealthy people, from athletes and celebrities to founders, investors, and corporate bigwigs with assets ranging from about $25 million to $20 billion. He calls them “golden geese” because they pay an awful lot in taxes. (They manage to avoid an awful lot, too.)

Over the years, Lesperance—who now lives in Gdynia, Poland—has helped hundreds of ultra-high-net-worth Americans relinquish their US citizenship, usually in order to escape the long arm of the IRS. (The United States is the only country besides Somalia that imposes taxes based on citizenship, not residency.) Other US clients just want a contingency plan—a legal “go bag” containing an extra passport or two—that a family might deploy if the taxman ever gets too aggressive.

But the Trump years were pretty good for America’s richest, and expatriation is expensive. The government charges a steep exit tax: a one-time capital-gains levy of 23.8 percent on the combined net value of a person’s assets. If that’s $1 billion, you’ll have a $238 million tax bill, plus legal fees.

“The last call I had, the guy kind of panicked and had laid out money for like five different things—of which he only needed one.”

Lesperance and his frequent collaborator, Massachusetts-based attorney Melvin Warshaw, saw interest in their IRS-avoidance services surge in November 2020, after Joe Biden, who pledged to make America’s wealthiest families “finally pay their fair share,” defeated Donald Trump. They saw another spike in January 2021, when Democrats took the Senate, and again in March 2021, when Elizabeth Warren rolled out her Ultra-Millionaire Tax Act.

But the two lawyers more recently began seeing a new trend, Lesperance says. Namely, “clients engaging us not for tax reasons, but rather to have an alternative should the US turn into MAGA America.”

Unlike their tax-obsessed clients, Warshaw explains, the new crowd isn’t looking for a permanent exit: “They’re saying, ‘I want options. I don’t mind paying high income tax, it’s just things are getting real hot in the kitchen and I want the ability to bug out—to go somewhere else for a while, because I don’t know what’s going to happen in the 2022 election. And I have little kids. I want a safe place for them.’”

Recent developments, particularly the Supreme Court’s reversal of Roe v. Wade, have fueled demand for dual citizenship even among the non-wealthy. But securing one is pricey if you don’t have a relative who is a citizen elsewhere. Lesperance’s new “client zero,” he says, dates to early this year, when the Atlantic ran an essay titled, “Trump’s Next Coup Has Already Begun.”

“Technically, the next attempt to overthrow a national election may not qualify as a coup,” staff writer Barton Gellman began, ominously:

It will rely on subversion more than violence, although each will have its place. If the plot succeeds, the ballots cast by American voters will not decide the presidency in 2024. Thousands of votes will be thrown away, or millions, to produce the required effect. The winner will be declared the loser. The loser will be certified president-elect.

The prospect of this democratic collapse is not remote. People with the motive to make it happen are manufacturing the means. Given the opportunity, they will act. They are acting already.

Gellman hit a nerve. Three would-be clients cited the essay in a span of two days, Lesperance says: “There’s a significant fear there. They look at the daily news, they see, ‘Okay, [Supreme Court Justice Samuel] Alito said this [Dobbs decision] only deals with abortion, and [Clarence] Thomas goes on in his dissent to say, no, we’re winding up for this, we’re throwing it back to the states.’ And then they see politicians talking about a nationwide ban on abortion. They see a very legal search done on Mar-a-Lago,” and all of a sudden people are talking about civil war.

When Warshaw returned to work from vacation the week after a draft of the Dobbs decision leaked, nine new inquiries awaited him—one or two per week was the previous norm—from clients sufficiently alarmed to drop $500 on an initial telephone consultation. “That at least showed me that they were ready to put some money on the line,” he says.

Among the lawyers’ new clients are former high-level government officials who served under Presidents Barack Obama and George W. Bush.”

“I did three of them today. And two yesterday,” Lesperance adds. For every client interested in expatriating for tax purposes, he estimates, “we now see 10 looking for a bug-out.” Securing a dual citizenship is an unfamiliar experience for most Americans, “so there’s a very big learning curve. The last call I had, the guy kind of panicked and had laid out money for like five different things—of which he only needed one.”

Since June 24, the date of the official Dobbs ruling, he and Warshaw have signed on 23 new clients—of whom only a handful were tax-motivated. Another 36 have completed consultations and received engagement letters, and 14 more are awaiting their consultations. In addition to super-rich clients, the new crop includes some professionals in the $5 million to $10 million range.

They are concerned, roughly in this order, Lesperance says, about the state of American democracy (voter suppression, rejection of election outcomes, MAGA subversion), the outlawing of abortion and what the court may do next, and the specter of domestic terrorism and mass shooting events.

They aren’t necessarily liberal. One client, a billionaire hedge-funder who would call himself a Reagan Republican, Lesperance says, just didn’t want his little kids to have to deal with the trauma of active shooter drills at school. He knew they probably wouldn’t ever be victims of a mass shooting, “but he knows that they’re going to be thinking about it every time they go to soccer practice or McDonald’s or SpongeBob’s new movie.” So he’s arranging for his wife and kids to live in a less trigger-happy country, and he’ll fly back and forth to be with them.

The new clients also include “a bunch” of former high-level government officials who served under Presidents Barack Obama and George W. Bush—“remember, to a MAGA you’re a RINO if you served for W,” Lesperance says. They “really got freaked out, not only by Dobbs but also by Trump’s announcement that he’s gonna get rid of the civil service and replace it with loyal flunkies.”

One would hope people who believe in good governance might stay around and fight the good fight. It’s not as though they are giving up, Lesperance says. “They’re sitting there saying, ‘I have a giant target on my back. So, yes, I’m gonna vote. Yes, I’m gonna join organizations and fund organizations to get voter registration. I’ll call that fire prevention,'” he says. “‘But I’m also gonna get fire insurance. And you know, depending on the outcome in the midterms, and what outcome comes in the general, I want to be able to bug out, and I want to take my family.’”