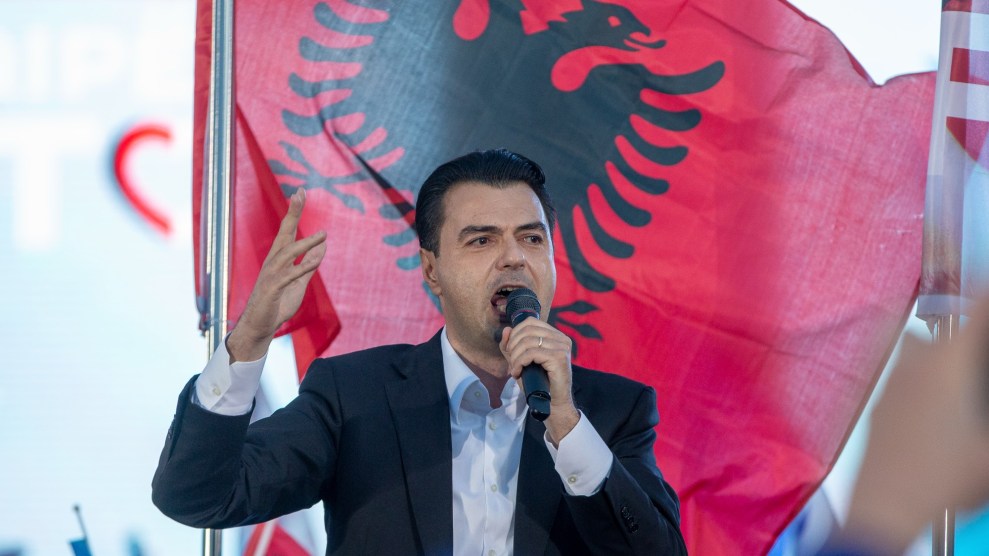 Lulzim Basha, the former leader of Leader of the Democratic Party of Albania, seen here in 2021, denies receiving secret funding from Russia.Visar Kryeziu/AP

Back in 2018, Mother Jones reported that payments made by a shell company to an American lobbyist for an Albanian political party might have originated in Russia. Over the next four-and-a-half years, we didn’t learn much more. But in a newly declassified assessment publicized on Tuesday, US intelligence weighed in. An administration official suggested the intelligence community believes the payments we reported on were part of a vast international effort in which the Kremlin dispensed at least $300 million to politicians and parties in two dozen countries.

In 2017 Lulzim Basha, then the head of Albania’s center-right opposition party, was running for prime minister. In a pro-Western country seeking European Union membership, Basha was a relative skeptic, criticizing the anti-corruption measures the crime-plagued country would have to adopt in order to join the EU. He was also ardently pro-Trump, calling to “Make Albania Great Again” and seeking access to the new US administration.

Basha’s party, the Democratic Party of Albania, or DPA, hired a lobbyist—a former Ted Cruz aide named Nick Muzin—to help him court Trump and Republicans in Washington. Muzin got Basha meetings with a few GOP lawmakers, a Breitbart interview, and entry to a June 2017 GOP fundraiser where Basha took a picture with Trump that he quickly disseminated in Albania as evidence of his access to the US president.

Around the same time, Muzin received a $500,000 payment connected to his Albanian lobbying. The origins of that money were opaque and disputed. Muzin and Basha gave differing explanations. But evidence suggested the money came via Biniatta Trade LP, a shell company registered in Scotland by two other shell companies, which were based in Belize. Biniatta, despite efforts to obscure its origins, appeared to have Russian roots, with ties to a series of other shell companies controlled by Russian citizens, we reported. Biniatta made payments supporting Basha’s party at the same time he had a controversial meeting with Russia’s ambassador to Albania and signaled he was more amendable to Russia’s anti-western aims than was the incumbent prime minister he was challenging.

Mother Jones’ report drew attention in Albania. Critics accused Basha of working for the Russians. In 2019, Albanian prosecutors charged him with money laundering and falsifying documents in connection with the matter. The case was later suspended under murky circumstances. Basha denied accepting Russian money. And his party has insisted it paid Muzin only $25,000, offering no explanation of why someone else would pay a US lobbyist hundreds of thousands of dollars to help the DPA. (Through a spokesman, Muzin said at the time he believed Biniatta Trade was a private company owned by supporters of the DPA.)

And there things have stood, more or less, for a few years. Basha left the DPA in March, replaced by the party’s founder, Sali Berisha, who is barred from entering the US due to what the State Department says is his “involvement in significant corruption.” Berisha denies allegations of corruption—and has blamed them on George Soros.

But in a cable sent this week to US embassies, and since declassified, Secretary of State Antony Blinken said Russia has paid at least $300 million to political parties and politicians outside Russia since 2014 in a bid to “to shape foreign political environments in Moscow’s favor.” And an administration source familiar with the report told the AFP that Russia “spent around $500,000 to back Albania’s center-right Democratic Party in 2017 elections.” That is an apparent reference to the same payment Mother Jones detailed back in 2018.

Asked for more detail, a State Department spokesperson declined to elaborate on the intelligence related to Albania. “We will not get into specific intelligence information, but we have been clear about our concern about Russia’s activity to influence the democratic process in various countries around the world, including our own,” the spokesperson said in an email.

Blinken’s cable, however, suggests that Russia has consistently employed opaque companies as cutouts to funnel to money to politicians. Blinken said Russia has used “lavish gifts, cash or cryptocurrency…shell companies and think tanks, as well as Russian embassy accounts” to secretly influence politicians.

The cable relies on an intelligence review reportedly ordered this summer by Biden administration officials. The administration said it declassified key details so that they could be publicized. “In order to fight this, in many ways we have to put a spotlight on it,” State Department spokesperson Ned Price said at a press briefing Tuesday.

Muzin did not respond to a request for comment Wednesday. Basha, on Twitter, denied receiving Russian support. “The Democratic Party [of Albania] has never received any foreign funding, much less from a Russian source,” he said.