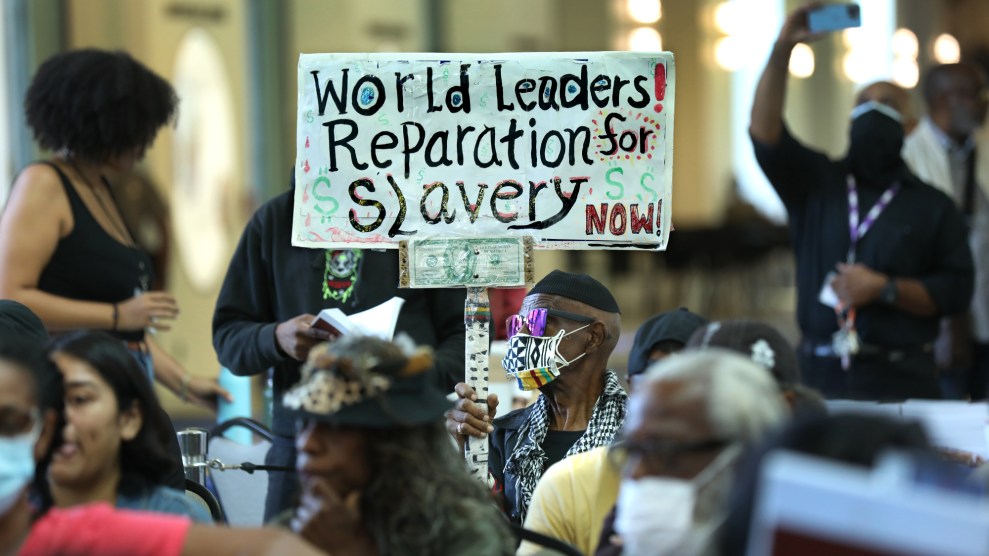 The Reparations Task Force has yet to answer some of the most difficult and essential questions on what California owes to descendants of slavery.Carolyn Cole/Getty

This past weekend, activists, economists, politicians, and members of the public packed a room at the California Science Center in Los Angeles to talk about reparations. Members of the California Reparations Task Force, a first-of-its-kind group, gathered for their tenth meeting to grapple with some of the difficult questions they have yet to answer about what California owes to descendants of slavery.

At the top of everyone’s mind was how to begin to calculate the amount the state should owe for the harms it has committed. The Task Force has to decide how much California should owe eligible Black residents not just for its involvement in slavery, but also for all the lingering trauma that has followed and the impacts it has had on every facet of society.

Though California’s 1849 state constitution was meant to be anti-slavery, the state was complicit in upholding the institution. There are no exact counts, but one Gold-Rush-era source estimates that in 1852, there were 1,500 enslaved African Americans living in in the state. The same year, California passed a state fugitive slave law, which not only criminalized formerly enslaved people who had escaped to the state from across state lines, but also people who had escaped there before California had even officially become a state.

To study these harms and try to understand how they could possibly be remedied, the Reparations Task Force was created in September 2020, with the passing of AB 3121. The Task Force has two main objectives: 1) To “study the institution of slavery and its lingering negative effects on living African Americans…and on society”; and 2) to make recommendations for “compensation, rehabilitation, and restitution for African Americans.” In other words, it’s time for the government to pay up.

The Task Force issued its first report in June, with a final report due by July 2023. The interim report includes preliminary recommendations, ranging from a proposal to repeal policies that contribute to housing segregation to calls for free healthcare programs and the elimination of discriminatory policing. The interim report also recommends that the state should implement a reparations program to address its racial wealth gap (which one 2016 estimate put at around $350,000 in Los Angeles), though the Task Force has yet to decide the size of that payment.

California would need at least $650 billion to close the wealth gap between its white and eligible Black citizens.

Defining who might be eligible for the payments has already sparked a contentious debate. Some members of the task force want the state to pay reparations to all Black Californians, while others advocated to narrow the definition to those who have a direct familial tie to slavery. In March, after hours of debate, the Task Force narrowly voted to base eligibility for reparations on lineage, determining that to receive reparations one should be “an African American descendant of a Chattel enslaved person or a descendant of a free Black person living in the United States prior to the end of the 19th Century.”

But how much should each of them be compensated? During its latest meeting, the Task Force heard from a team of economic experts who have been examining how to calculate an amount that could possibly make up for California’s harms to descendants of slavery. One model the experts presented is the national reparations model, which contends that the racial wealth gap is the best available measure of the effects of slavery and white supremacy, and thus reparations should seek to close it. The current national average per person racial wealth gap is about $360,000—meaning the average white person has about that much more in net worth than the average Black individual. According to the expert group, California would need at least $650 billion to pay this amount to eligible Californians. “In contrast,” said William Darity, one of the authors of From Here to Equality and a member of the economic expert group, “California’s total annual budget is less than $300 billion. So it would be a very tricky proposition for the state to make a commitment to eliminate the racial wealth gap.”

Another model introduced by the economic expert group is the harms/atrocities model, which names specific harms that California has committed and calculates the damages associated with each. The economic group identified unjust property takings, the devaluation of Black businesses, disproportionate mass incarceration and over-policing, and health disparities, and housing discrimination as examples of such atrocities. The experts calculated that this model could cost California a minimum of $120,000 per atrocity for every person eligible.

But some harms cost more than others. The life expectancy of Black non-Hispanic Californians was found to be 7.6 years shorter than that of White non-Hispanic Californians due to health disparities. Compensating African American descendants of slavery for that disparity alone could cost up to $967,000 per person, according to the expert group. The total cost of atoning for the life expectancy gap alone could amount to trillions of dollars.

“I think after this process is over,” laughed Task Force Chair Kamilah Moore after hearing the presentation, “we need to get you all a Nobel Peace Prize in economics.”

Though the task force still has until July 2023 to deliver its final report and recommendations, it faces some more immediate issues. Speakers called attention during the meeting’s public comment period to AB 2296, a bill introduced by Task Force member and Assembly Member Reginald Jones-Sawyer, that would extend the work of the Task Force by a year and also allow for the removal of members by the appointing body. The Coalition for a Just and Equitable California, a group that helped write the legislation that created the Task Force, has vehemently opposed AB 2296 and called for Governor Gavin Newsom to veto the bill. “We’re saying reparations delayed is reparations denied,” Chris Lodgson, a lead organizer with the Coalition, told the San Francisco Chronicle. “We’ve been waiting for reparations for over 400 years.”

Though several cities across the nation have made strides to address past harms and pursue local reparations, California is the first state to do so, and could serve as a possible model for other states, or even the nation. The recognition that the Task Force’s every meeting, public comment, and debate holds such weight not only for Californians, but for descendants of slavery nationwide, is not lost on advocates. “California will be the first state to actually do reparations,” said Lodgson at a recent community listening session in Vallejo. “Recognize where we are. Every single one of us is sitting in a history book right now. They’re going to be reading, writing, and talking about what we did during this time, 50 years from now, 100 years from now.”