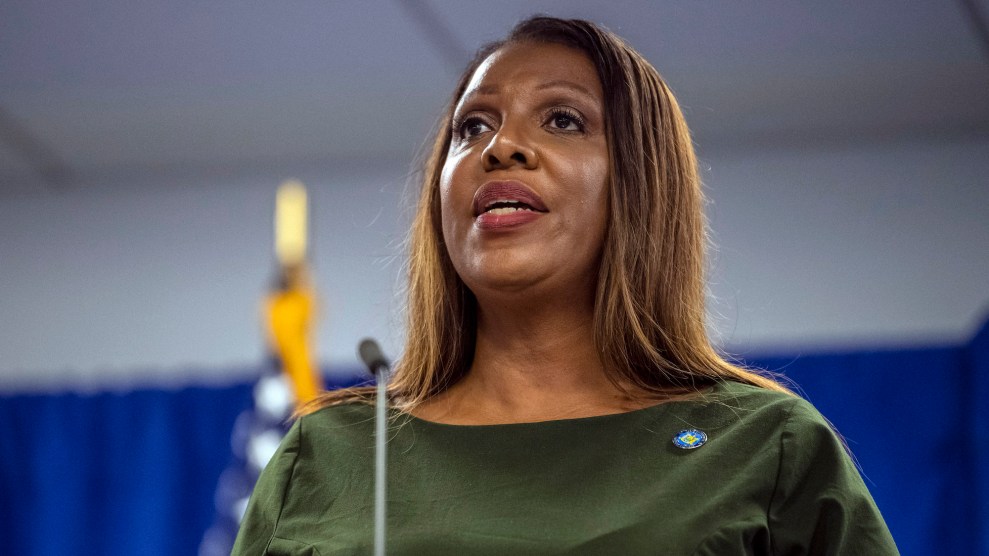 New York Attorney General Letitia James on Wednesday filed a $250 million lawsuit against Donald Trump, accusing the former president of committing a variety of fraudulent business practices for a decade in the run-up and during his presidency. James—who also named Trump’s adult children, top executives at his companies, and a slew of LLCs owned by the former president—is accusing the Trumps of falsely valuing various properties they owned, hundreds of times, to secure beneficial terms for loans and insurance coverage and to reduce what they owed in taxes.

James is seeking $250 million in repayments—a figure she says represents the minimum amount she believes Trump benefitted from the alleged fraudulent activity. She also wants to bar Trump, Donald Trump Jr., Eric Trump, and Ivanka Trump from ever serving as an officer or director of any corporation registered or licensed in New York; bar Trump from engaging in any commercial real estate deal in the state of New York for five years; and bar Trump from applying for a loan from any financial institution registered with the New York Department of Financial Services.

While the broad framework of the accusations against Trump are not new—James essentially laid out her case against the Trumps earlier this year in court filings in her ongoing legal battle to get the Trumps to cooperate with her investigation—the 260-page lawsuit contains an enormous amount of detail on the inner workings of the Trump Organization as it sought loans and insurance coverage on various properties over the years. James also stressed that while Trump has dismissed her investigation as a “witch hunt” into what he has described as standard operating practices for those in the commercial real estate industry, she believes it is anything but normal.

“Claiming that you have money that you do not have does not amount to ‘the art of the deal,’ it’s the art of the steal,” James said. “And there cannot be different rules for different people in this country or in this state, and former presidents are no different.”

The former president lashed out on his social media site, calling James a “fraud” and asserting that the banks and insurance companies he did business with “never had a complaint about me.”

A spokesperson for the Trump Organization released a statement taking a similar stance, accusing James of looking out for big banks, but arguing that no one who had done business with Trump was hurt by any of his business practices. The Trump Organization also said that the lawsuit was politically motivated.

“As we all know, today’s filing has nothing to do with the facts or the law. Instead, it is about politics, pure and simple. Indeed, targeting Donald J. Trump and the Trump Organization is exactly what Attorney General James said she would do while running for office,” the statement reads. It also asserts that the suit is “a desperate attempt to pander to voters.”

Read James’ full complaint against the Trumps below.