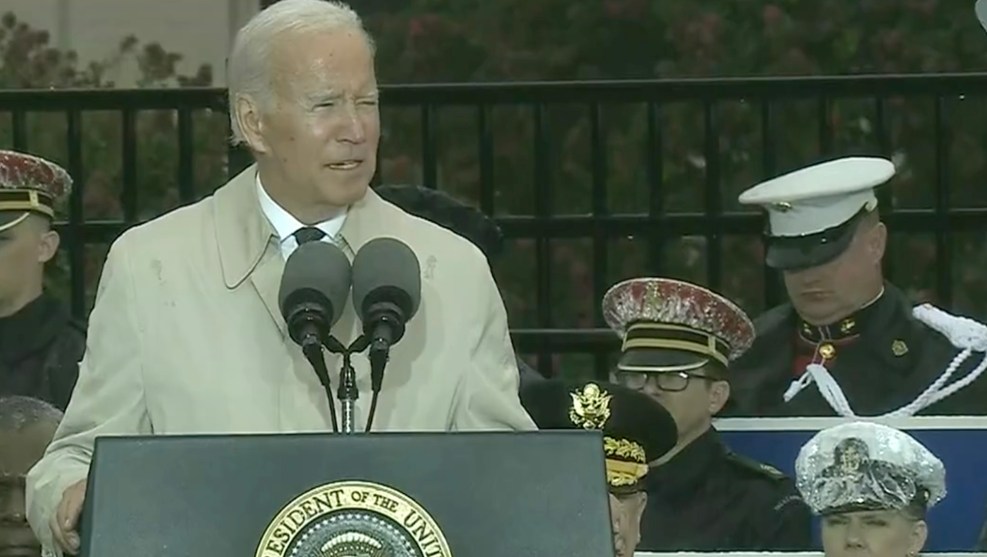 Twenty-one years ago today, hijackers directed two passenger airlines into the World Trade Center’s twin towers and another into Pentagon. A fourth flight, likely headed toward the US Capitol, crashed into a field in rural Pennsylvania. The series of events, which killed 2,977 people, shocked a nation that had not experienced such mass carnage on its mainland since the Civil War. The period after the attacks witnessed a brief period of comity in the nation and an outpouring of sympathy and support for the United States from the rest of the world.

All of that soon evaporated as the US government launched the War on Terror, an effort marked by officially sanctioned torture and mass surveillance. And so today, given that history, how should we remember 9/11?

In a speech at the Pentagon today, flanked by military brass, President Joe Biden showcased what has emerged as the conventional way to think about the history-changing cataclysm: An attack on American resolve, which the nation absorbed with dignity, and responded to with successful and justified aggression.

Join me as I deliver remarks to honor and remember the victims of September 11th. https://t.co/2KTs8Z1ZqZ

As has largely been the case on this anniversary for the last 20 years, the president opened his remarks by focusing on the grief of those who the dead left behind. His own life haunted by the trauma of tragic deaths of family members, Biden vowed to “keep alive the memory of all of those lives stolen from us on that terrible day.” He added: “I know that for those of you who lost someone, 21 years is both a lifetime—and no time at all.” He quoted a message sent to the American people by the recently deceased Queen Elizabeth II: “Grief is the price we pay for love.”

After a wrenching tribute to the first responders who entered smoking rubble to save lives, Biden sought to justify the subsequent wars launched by the US government in response to the day’s atrocities. “Over the years since 9/11, hundreds of thousands of American troops have served in Afghanistan, Iraq, and so many other places around the world, to deny terrorists a safe haven and to protect the American people,” he declared. Biden took pains to avoid using the occasion to drum up anti-Muslim furor.

Meanwhile, right-wing pols chose to lionize the War on Terror without such restraint. Rudy Giuliani—who commanded the spotlight as “America’s Mayor” during 9/11 and its aftermath—took a break from his crusade to overturn the 2020 election to claim that the wars “preserved our spirit and saved our nation,” while having a poke at “Islamic Extremist Terrorists.” (Several days before the anniversary, Giuliani appeared on Newsmax and described 9/11 “in some ways…as the greatest day of my life.”)

Today we never forget the heroism of those who died and fought to save our Nation. The aim of the Islamic Extremist Terrorists was to murder as many innocents as possible and break the spirit of America. Our heroes preserved our spirit and saved America.

We’re indebted to the brave men and women who continue to serve and sacrifice in our fight against radical Islamic terrorism.

In his 2021 book Reign of Terror, veteran journalist Spencer Ackerman delivered a different way of thinking about the violence unleashed in the aftermath of the 9/11 attacks. Ackerman argues that the forever wars neither “protect[ed] the American people” (as Biden claimed) nor “saved” the nation (as per Giuliani). Instead, buoyed by a tangle of lies about weapons of mass destruction in Iraq, the wars torched trillions of dollars of federal money only to fan racist anti-immigrant furor; justify torture and the rise of mass digital surveillance; breed an atmosphere of paranoia and conspiracy-mongering that eroded faith in American institutions; and committed the nation to foreign adventures that could never end in victory. The chaos wrought at home ultimately opened the door to the presidency of Donald Trump, Ackerman argues.

“Experiencing neither peace nor victory for such a sustained period was a volatile condition for millions of people,” he writes. “Trump knew how to explain such humiliations: the War on Terror was an enraging story of insufficient brutality wielded by untrustworthy elites.” He goes on:

Those elites, he claimed, pretended that America was not at war with Islam, that it was not experiencing a foreign invasion, that it was not at risk, in the final analysis, of being itself lost. If America could not defeat its enemies abroad, there were so many here at home: Muslims, nonwhite immigrants, brown people from what Trump called “shithole” countries, queer and especially trans people, Black people, socialists, liberals, Jews. A war that never defined its enemy became an opportunity for the so-called MAGA coalition of white Americans to merge their grievances in an atmosphere of righteous emergency. That impulse unlocked a panoply of authoritarian possibilities that extended far beyond the War on Terror, from stealing children to inciting a violent mob that attempted to overturn a presidential election.

Ackerman recently expressed hope that his analysis would emerge as the “dominant narrative of the 9/11 Era.” Listening to Biden and other politicians mark the anniversary today suggests that the heroic view of the War on Terror clearly still has plenty of life.