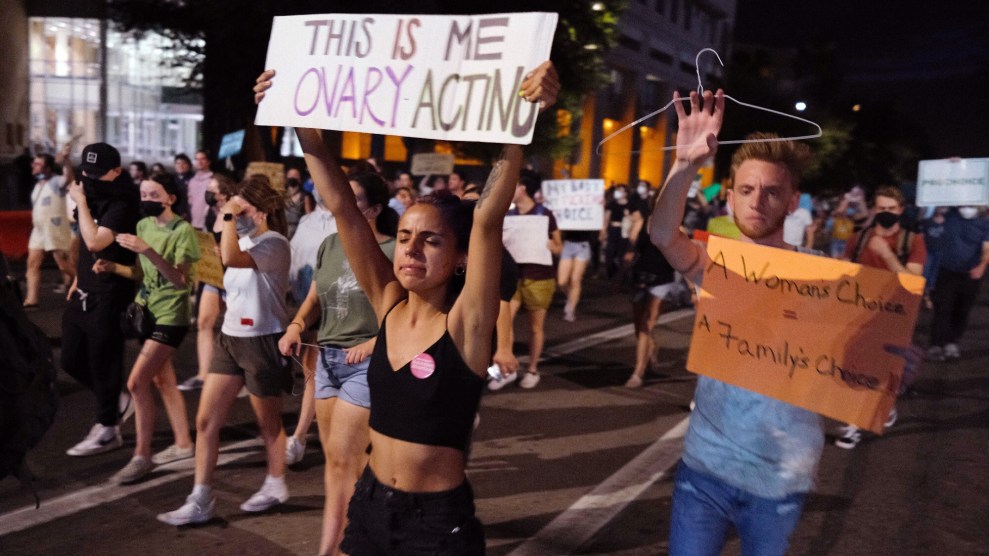 Before Arizona was even a state, its first territorial legislature enacted a total ban on abortion in 1864.

On Friday, a state judge lifted a decades-old injunction blocking that law. Now, any person who helps “procure the miscarriage” for a pregnant person, “unless it is necessary to save her life” risks spending two to five years in prison.

In her ruling, released a day before a 2022 law banning abortion after 15 weeks was slated to take effect, Judge Kellie Johnson of Pima County Superior Court reasoned that the 1973 injunction that quashed the Civil War-era abortion ban relied on the US Supreme Court’s Roe v. Wade decision. That case, which guaranteed the right to abortion until fetal viability, was overturned by the country’s high court in June—leaving the question of abortion access in the hands of individual states, including more than half a dozen with pre-Roe bans on the books, including in Arizona, Michigan, and Wisconsin.

Abortion initially remained legal in Arizona after the Supreme Court’s decision invalidated Roe. But questions about whether the 1864 ban—which was updated and ratified in 1901—sent a chilling effect through the state’s nine abortion clinics, causing some to stop providing abortion care due to fear of prosecution.

Even the state’s top Republicans were split on whether the 158-year-old ban was valid: This summer, Arizona Governor Doug Ducey said that the 15-week ban he signed in March would supplant the older ban, while his fellow-Republican, Attorney General Mark Brnovich, argued the pre-statehood ban was enforceable.

“Our office has concluded the Legislature has made its intentions clear with regards to abortion laws,” Brnovich wrote on Twitter. The 1864 law, he wrote, “is back in effect and will not be repealed,” thus superseding the 15-week ban that was set to take effect later this month.

Our office has concluded the Arizona Legislature has made its intentions clear regarding abortion laws. pic.twitter.com/jvjKXaXKwd

Both the 1864 total ban and the 15-week ban passed nearly two centuries later provide exceptions only for situations in which the parent’s life is at risk; neither law has carve-outs for rape or incest.

But even after Friday’s court decision, it is still not fully clear what the law is in Arizona. In response to questions about Johnson’s ruling, Gov. Ducey’s office told ABC News that he was “proud to sign” the 15-week abortion ban, “which goes into effect [Saturday].”

In this case, though, Ducey’s statement may prove to be hollow. As the state’s Attorney General, Brnovich is the one with final say on whether to prosecute people in violation of the state’s laws—including the 1864 one, if he so chooses. He has indicated he will enforce the stricter ban. “We applaud the court for upholding the will of the legislature and providing clarity and uniformity on this important issue,” he tweeted Friday. “I have and will continue to protect the most vulnerable Arizonans.”

If that’s the route Brnovich takes, it may be short-lived: Both he and Ducey are term-limited in their respective roles as Attorney General and Governor, so neither can run for reelection. Both races to replace them in November are tight.

The next state Attorney General will either be Republican Abe Hamadeh, who says he will work to make sure Arizona’s abortion laws are “fully implemented,” or Democrat Kris Mayes, who says she would not imprison healthcare providers for breaking Arizona’s abortion laws. The University of Virginia’s Center for Politics rates their match-up as “competitive.”

The race for the Governor is also a toss-up between two candidates with very different views on abortion rights. Democrat Katie Hobbs, who is currently Arizona’s Secretary of State, called Friday’s ruling “draconian” and said that, if elected Governor, she will do everything in her power “to stop oppressive bans created before women even had the right to vote to control our reproductive freedom.”

According to polling averaged by FiveThirtyEight, Hobbs is currently ahead of GOP gubernatorial candidate Kari Lake, who calls abortion “the ultimate sin,” by just two points.