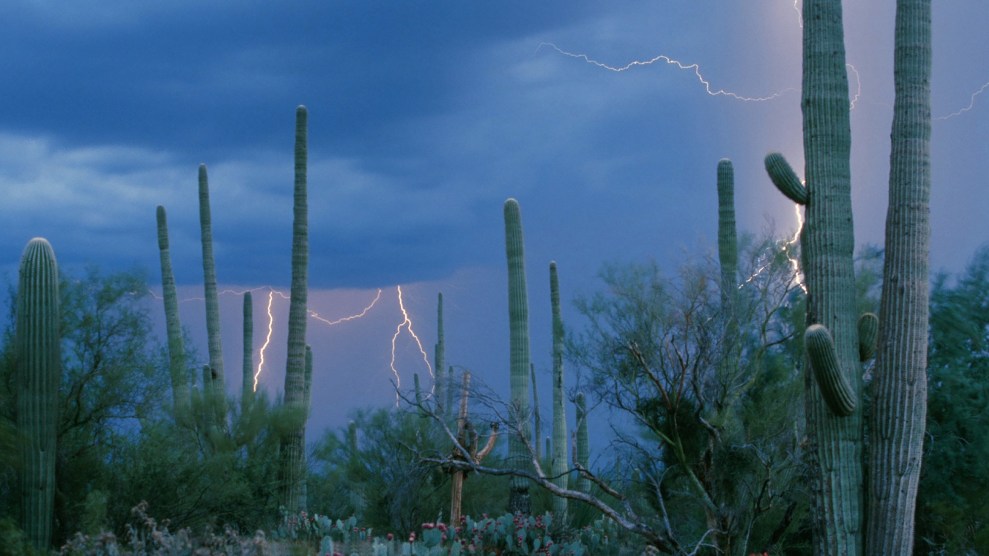 On an evening in late June, Alex Jimenez, Tucson Water’s artist-in-residence, hosted an outdoor art installation designed to “call the rain through sound.” The Santa Cruz Sound Experience, held underneath one of the bridges that crosses the dry Santa Cruz River, featured a three-hour sensory compilation of the region’s seasonal summer rains. Toward the end of the event, the skies answered the call, and attendees celebrated as raindrops fell.

The monsoon season has come to the Southwest again. But this season is different from past monsoons: It’s the first since scientists demonstrated that North America’s monsoon —which drenches Sonora, northern Sinaloa, and northeastern Chihuahua in Mexico, and the southern fringe of Arizona and New Mexico—differs from seasonal rains in the rest of the world. And, unfortunately for Southwesterners—who welcome the precipitation and need a break from the summer heat—the phenomenon is likely to weaken as the climate warms.

Monsoons, which exist on every continent except Antarctica, are continental-scale wind patterns that transport water vapor and cause seasonal rains. In general, they occur when intense sunlight during summer causes the land to heat up. Warm air rises and draws in water vapor from the ocean, creating a “thermal contrast between the land and the nearby ocean, and an air circulation between the two,” William Boos, a climate scientist at the University of California, Berkeley, explained.

Scientists and lay observers alike have long thought that the North American monsoon was also caused by this “thermal forcing,” with cooler water vapor being pulled in from the Pacific off the west coast of Mexico. To Boos, however, something about North America’s monsoon, which is smaller and more oddly shaped than its peers, was “always a little peculiar.”

In 2021, Boos and Salvatore Pascale, who researches climate dynamics at the University of Bologna in Italy, published an article in the journal Nature that showed that the Southwest’s summer storms were not caused by the typical thermal forcing. Rather, they were caused by something that scientists call “mechanical forcing,” which has to do with terrain. When the mid-latitude jet stream—the band of eastward winds that circle the entire planet—collides with the Rocky Mountains, the range deflects the winds southward, to Mexico. As the winds move east, they push over Mexico’s Sierra Madre, after collecting water vapor from the tropics of the eastern Pacific and Mexico. Then, when the jet stream lifts, forcing moisture-laden air up over mountainous terrain, the vapor condenses into “orographic rain” that falls on the western side of the mountains, creating the monsoon.

“The orographic effect is critically important, especially in terms of what’s going to happen with climate change,” said scientist Agustin Robles of the Technological Institute of Sonora’s Laboratory of Environmental Modeling and Sustainability. “We’ll see the bulk of the changes there.”

There’s a simple reason why scientists hadn’t already figured out geology’s role in creating the monsoon: The technology to do so didn’t exist. Whereas the Tibetan Plateau is so large that it could be modeled for its effect on climate starting in the 1980s, the Sierra Madre was too small and too fine for computers to render accurately until recently. Boos and Pascale used a cutting-edge supercomputer to compare a model of the region’s topography with a version in which they set all the landscape’s elevations to zero. Since that version in effect flattened Mexico, they called it “FlatMex.” In FlatMex, the monsoon all but disappeared, leading to their conclusion that the North American Monsoon is created by wind going over the Sierra Madre.

The recent research built on previous studies of the North American monsoon. A few years ago, Pascale, Boos and six other collaborators published a study that challenged the idea that climate change will increase precipitation across North America.

“There’s a classic idea that as the air gets warmer, it can hold more water vapor, so it will deliver more water to the continent,” said Boos. While that may be true for other monsoons — including the southeast Asian monsoon, which has already become wetter — it’s different in regions like the Southwest, where most of the rainfall comes from thunderstorms and the cumulus clouds associated with them. Thunderstorms are caused by a difference in the temperature and humidity of the air near ground level and the air higher up in the atmosphere. Once the difference between the two air temperatures reaches a certain level, they turn over, switching places. The hotter, less dense air rises and the colder, denser air sinks, because of gravity. But as the upper levels of the atmosphere warm, there is less of a difference between the two temperatures—and that means fewer thunderstorms and a weaker monsoon.

Communities in the Southwest, which is already facing increasing aridity and extreme heat, will need to improve both air quality and the infrastructure that ensures their access to water, and they’ll also have to find ways to cope with more days at high temperatures. Unfortunately, there “aren’t a lot of options” to address the declining summer rainfall, said Dan McGregor, natural resources services manager for Bernalillo County, New Mexico. His agency mainly encourages water users to conserve water, maintain their wells, and to harvest rainwater.

In the Southwest, these effects will disproportionately affect those who rely directly on the rains. Sheryl Joy, Acting Seed Bank Manager at the organization Native Seeds/SEARCH in Tucson, said that for Indigenous communities in Arizona who have developed agricultural systems organized around the summer rains, “continued declines in monsoon rainfall could have devastating effects” on the communities who continue to use these practices.

In Sonora, Mexico, where most of the monsoon’s precipitation falls, there is less infrastructure in place to address water shortages than there is in the U.S. Southwest. “Unlike Arizona or California, which have long-term planning and responses such as the Tier 1 shortage announcements, here our institutions have not anticipated the effects of the weaker monsoon,” said Robles. “They tend to blame drought, when it’s really a modification of the monsoon over the last 30 or 40 years.”

Jonah Ivy of Tucson’s Watershed Management Group focuses on helping residents use the water that falls, rather than waste it as runoff. “What does a weaker monsoon matter if right now we’re pushing all the water off our landscapes?” he said. “Even with a weaker monsoon, we still live in the wettest desert in the world. We still live in abundance.”