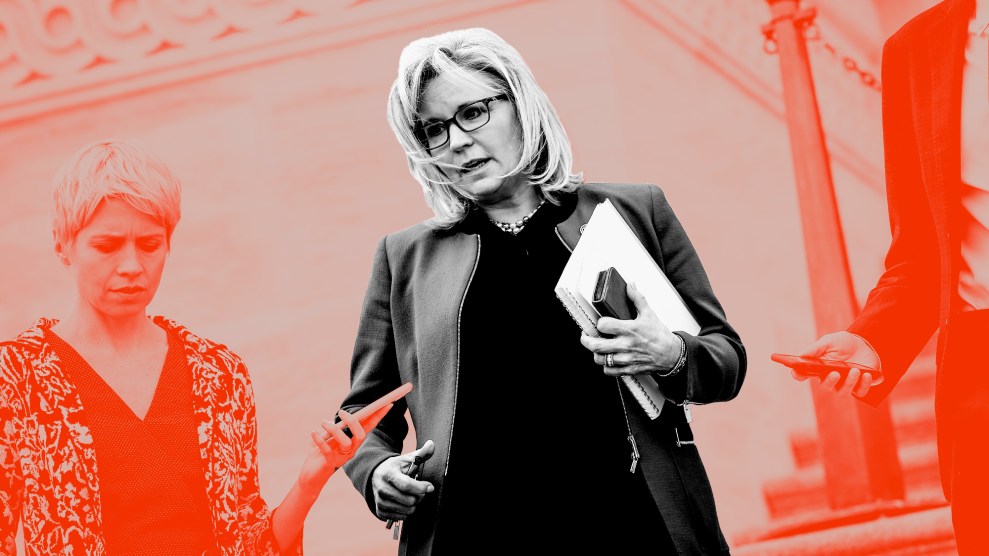 In the run-up to the 2016 election, Liz Cheney issued a dire warning. The future of American democracy, and the nation’s place as a symbol of freedom to the world, was on the ballot. If voters chose poorly, she told Rush Limbaugh, the next president “would be the most corrupt individual ever to sit in the Oval Office.”

She was referring, of course, to Hillary Clinton.

At the time Cheney, the daughter of the former vice president, was a candidate for Congress with an incredibly bright future. Her campaign was such a formality that it was (I think) the only article in our post-election issue we didn’t have to rewrite from scratch; a pig might fly or get elected president, but no Cheney was going to lose in Wyoming. The reason for her rising star was straightforward: She was a Bush administration veteran who was willing to go to the mat for President Donald Trump, no matter what the naysayers said. They both had a use for each other. By the start of her second term, she was chair of the House Republican Conference. When Trump ran for re-election she offered her endorsement.

But on Tuesday, Cheney’s career in Congress came to an abrupt end, when she lost her Republican primary to conservative challenger Harriet Hageman. The election itself was mostly a formality. After voting to impeach President Donald Trump for his role in the January 6 insurrection and vowing to push back against his “crusade to undermine our democracy,” Cheney was stripped last year of her House leadership position. The Wyoming GOP censured her, and later voted to no longer recognize her as a Republican. Although her father once represented the state in Congress and remains its most famous political export, Republicans in the state had swung hard to the right in the Trump years. On January 6, while Cheney and her colleagues were besieged inside the Capitol, the state GOP chair—whose name was included on a leaked list of Oathkeepers members—was protesting outside.

This is not the first time that Cheney has found herself in the political wilds. When George W. Bush and Dick Cheney left office in 2009, Republicans weren’t clamoring for a return to the glory days. Neither of them have addressed a Republican National Convention since they left office. As the country tried to put the Bush years in its past, Liz Cheney emerged as a mouthpiece for an administration and a political movement in exile.

But she understood that by couching this Bush-era Lost Cause rhetoric in the anti-Obama language of the conservative base, she could find not just an audience, but a fresh start. She became a regular on Fox News and talk radio in these years, serving as a hype woman for her father’s career, and tearing into the Obama administration with such fervor that some conservatives floated her for president.

Was she a birther? Not personally, but she indulged the racist lie with the same cowardly coddling that everyone else in the party did. “One of the reasons you see people so concerned about this, I think this issue is, people are uncomfortable with having for the first time ever, I think, a president who seems so reluctant to defend the nation overseas,” she said.

The rest of the administration didn’t get off easy either. As I wrote in a piece for the magazine:

With [Bill] Kristol, a former McCain staffer, and the sister of a man who was killed on 9/11, Cheney formed a dark-money outfit called Keep America Safe, which sought to paint Obama as weak on security. One of the group’s first ads bashed Attorney General Eric Holder for hiring attorneys who had once defended Guantanamo detainees. The spot referred to the lawyers as the “Al Qaeda 7” and asked, “Whose values do they share?” as b-roll of someone who looked like Osama bin Laden played in the background. It was like 2004 all over again.

The role she had then and the role she has now are in many respects the same one, applied to radically different circumstances—she is defending her movement against the pretenders who would sully its work. That she was wrong about Obama then and right about Trump now is obvious, but it was the willingness to play in the mud that made her a rising star and a member of Congress in the first place, just as it was the breakdown of public trust and civic guardrails during the Bush era that made possible Trump’s MAGA ascent. By the time she decided that orange man, in fact, bad, the damage had long since been done. She is left to critique the ruling party in exile; the sort of person who in a different context people like the Cheneys might think to covertly fund and equip.

None of this is to erase the work she’s done as a dogged and justifiably incensed leader on the January 6 Committee. She stands almost alone in her caucus, in her decision to not just quietly retire, or gripe anonymously to the press, but to actually fight back and wield the power she has against the threat she’s so clearly recognized. She’ll be fine, of course, both professionally and financially, but if the stand she took cost nothing, well, a lot more people would have taken it. But perhaps her fate might also be a lesson to the aspiring public servants out there—that the movement you cynically stoke might some day come for you, too.