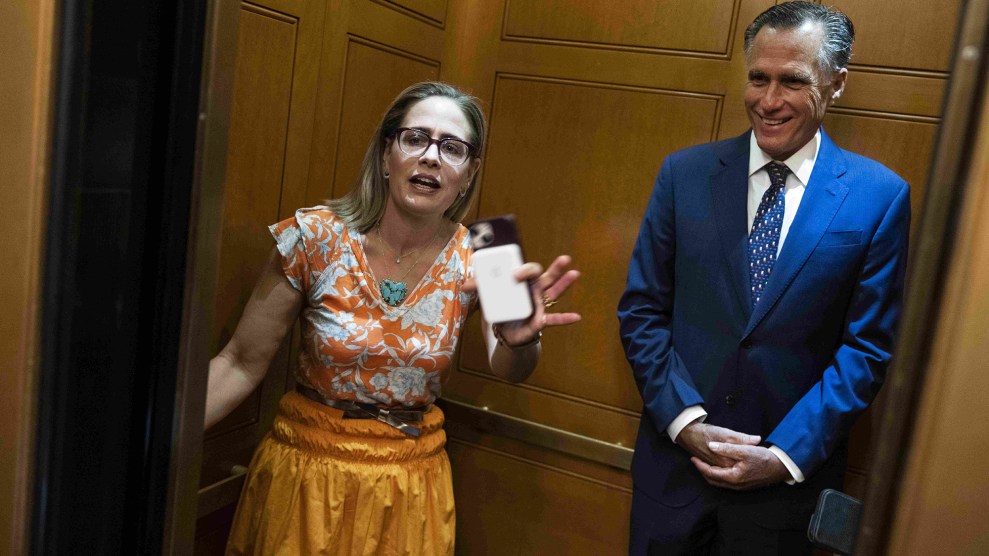 On Sunday, the Senate passed the Inflation Reduction Act on a party-line vote, sending the domestic policy package to the House for final passage. Barring an unforeseen development, President Joe Biden could be signing a major piece of legislation into law in days. The IRA, which was the result of weeks of negotiations between Sen. Joe Manchin (D-W.Va.) and Senate Majority Leader Chuck Schumer (D-N.Y.) this summer, is a much scaled-down version of the Build Back Better Bill that passed the House last fall. But it delivers on some core agenda items Democrats have been promising voters they’d act on for years—including climate change and prescription drugs.

Yet much of the discussion in the days leading up to the final vote focused on what wasn’t in it: language that would have (very modestly) pared back a notorious tax break for private equity. Sen. Kyrsten Sinema (D-Ariz.) had the provision, which would have recouped $14 billion for the Treasury over 10 years, cut from the bill before announcing her support for the final package. In the end, the carried interest loophole survived the way it always has—not by being too big to fail but by being too small to risk failure over.

As I explained in a story for our private equity package earlier this year, carried interest is a very old idea that’s been embraced and distorted over the last few decades by private equity, and to a lesser degree, hedge funds:

By the 13th century, Venetian investors were offering seafaring merchants a quarter of the overall profits in exchange for selling their goods in foreign markets. That percentage was the carry—it was a return on what we’d call the merchants’ sweat equity. Private equity firms, which pool money from investors such as pension funds and use it to buy and restructure (euphemism alert!) existing companies, borrowed the concept, but not the risk. They typically take a 2 percent annual cut of the assets they manage as a fee, and then a 20 percent share of the profits when those assets are sold. There’s no sweat equity—the only time private equity titans brave the high seas is on a yacht—but there also isn’t much regular equity, either. The firms’ final take is vastly disproportionate to whatever small sum they might have contributed.

In other words, it’s basically a performance bonus, but thanks to an IRS ruling in the early 1990s, the agency treats this kind of compensation differently than bonuses or sales commissions—not as regular income but as a capital gain. The result is that private equity managers can end up paying a lower tax rate on these earnings than—to use the comparison Democratic politicians invariably make—“teachers and firefighters” pay on their income.

Democrats began pushing to close the loophole in 2007 and came pretty close to doing it early in the Obama administration. But each time, the industry’s allies—recipients of tons of private equity campaign cash, and in the case of former Indiana Sen. Evan Bayh, a plum job upon retirement—managed to apply the brakes. President Donald Trump likewise promised to close the loophole during his 2016 run for president, but the provision was, once again, cut from his sweeping tax reform law in 2017, replaced with a modest change to the holding period before an investment could qualify for the lower rate. (By extending the period from one year to three, it did make the tax break a lot less useful for hedge funds, which do not typically hold onto their investments as long as their peers in private equity.)

When Democrats began working on Build Back Better—the substantially beefier precursor to the IRA—they put carried interest in their sights once again. Biden, like Trump and Obama before him, had pledged to end the loophole and a number of early proposals, such as one from Sen. Ron Wyden (D-Ore.), would have done that. But in a 50–50 chamber, private equity only needed one ally to stop the effort. Without Sinema, a major recipient of campaign contributions from employees of big PE firms and a longtime champion of the industry, there could be no BBB. Once she made clear her unwillingness to budge, the effort was abandoned.

The carried interest provision in Manchin’s revived bill was thin. Democrats were not actually going to close the loophole this time either—instead they proposed to extend the holding period once more, from three to five years. According to Victor Fleischer, the UC-Irvine tax law professor who helped bring the tax break to public attention, that’s still less time than private equity firms typically hold onto their investments, so this change wouldn’t have really altered PE’s accounting practices or brought in that much new revenue:

The Schumer-Manchin deal on carried interest isn’t great. All it does is extend the holding period from 3 to 5 years, same as the House-passed BBB. 1/x

Between the toothlessness of the IRA’s carried interest language, the relatively small sum of money it was going to generate, and Sinema’s well-known opposition, it never really felt like there was going to be much of a showdown. You could be forgiven for thinking that the main reason it was included in the initial version was so that it could be ceremonially stricken by the Arizona senator.

Now, having survived the IRA, carried interest is likely to endure a good deal longer. It’s hard to imagine a better opportunity to close the loophole will arise during the Biden presidency, and while some Republicans have voiced their opposition in the past—usually while running for president—it’s not the kind of issue you’d expect to move out of a Republican-controlled House or Senate, even in the unlikely event that President Ron DeSantis wanted them to. The last time Democrats failed to do anything about carried interest, the loophole was not seriously threatened for another seven years.

For a decade and a half, carried interest has been one of Washington’s great punching bags. Congresses and presidents come and go, but the lower tax rate always stays. That’s the thing about punching bags, after all—eventually, they wear you out.