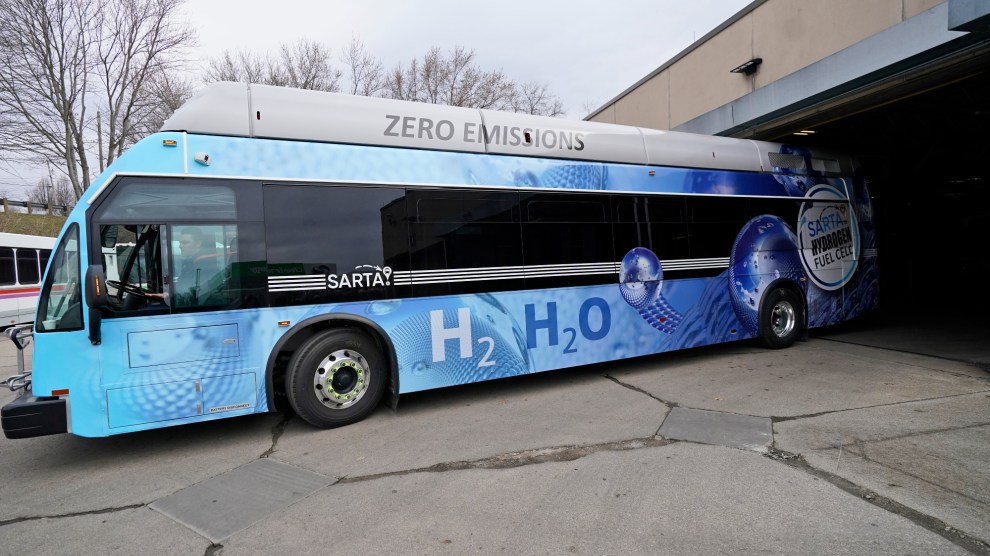 The Democrats’ new climate legislation, which President Joe Biden signed into law this week, has been described as “transformative” and “game-changing.” But perhaps the most apt word is “shocking”—in a good way, for once. According to analysis after analysis, it’s become clear that this is what the United States needs to make good on promises to fight climate change. For climate scientists long accustomed to shouting into the wind—or at least their Twitter feeds—it’s something to celebrate. “We’re so pumped about this bill,” says Morgan Rote, director of US climate at the Environmental Defense Fund.

In a bill as sprawling as this one, compromises will always be necessary. Provisions for new oil and gas leases are the obvious doozy, slotted in to appease Senator Joe Manchin (D-W. Va.). So are potential compromises on environmental permitting, which include ample deference to oil and gas pipelines. But perhaps nothing is as confusing—or as potentially far-reaching and long-lasting—as the bill’s generous incentives for “clean” hydrogen. If this bill allows more fossil fuel development, it’s with the tacit hope that the industry is facing an inevitable decline. The theory is that it’ll kick the bucket anyway as demand for oil and gas withers, outmoded and outcompeted by cleaner sources of energy. Hydrogen? It’s here to stay.

That push isn’t new, exactly. The provisions, which are modeled after those that helped kickstart solar investment decades ago, build on other recent efforts, like an $8 billion investment in the Biden administration’s 2021 infrastructure bill to build Hydrogen Hubs across the country that can serve as epicenters of the fuel’s production and distribution. Those were widely derided as potential “bridges to nowhere,” without incentives that would ramp up hydrogen supply and demand. This bill has them, with production tax credits that get more generous depending on how “clean” the hydrogen is.

The definition of “clean” differs depending on which federal laws you consult: “Right now it’s a completely meaningless term.”

Using hydrogen is undoubtedly clean—it is combined with oxygen to produce water vapor and energy and has applications for powering utilities, homes, and cars. But it can involve dirtier sources of energy, often natural gas, which contains climate-warming methane. One reason hydrogen has backers in the oil and gas industry is because the fuel, which can come in gas or liquid forms, allows for the repurposing of fossil fuel infrastructure that is poised to be abandoned during the shift to renewables.

Energy experts often use a rainbow full of buzzwords to describe the relative virtues of these hydrogen-making processes. First there’s “gray” hydrogen, the dominant method of production today, which combines methane and water vapor through a process called “steam reforming.” In the process, waste carbon dioxide is released into the atmosphere.

Next comes “blue” hydrogen, which is the same thing, except it involves capturing some of that CO2 and burying it underground. Other processes involve splitting apart water molecules using electricity, which is known as electrolysis. It’s “green” when that electricity is produced with renewable energy and pink when it’s nuclear (a potential lifeline for struggling plants). And there’s turquoise, yellow, and brown, too—but let’s not belabor the point.

The bill is agnostic when it comes to any specific method (or color code) and instead sets a sliding scale of incentives based on the lifecycle warming effects of producing the fuel. The cutoff for those benefits is set at an equivalent to the release of 4 kilograms of carbon dioxide—somewhere in the “blue” hydrogen category. Those incentives increase as the amount of CO2-equivalent emissions approaches zero, something that is only likely to be achieved using electrolysis with low-carbon electricity sources.

So how “clean” is this range of options? “Clean compared to what?” asks Arvind Ravikumar, an energy policy researcher at the University of Texas at Austin. It’s cleaner, for the most part, than burning fossil fuels directly. But it’s dirtier than a lot of other ways to produce energy, like wind and solar. And the definition of “clean” differs depending on which federal laws you consult. “Right now it’s a completely meaningless term,” says Emily Grubert, who studies sustainable energy policy at the University of Notre Dame.

Seen one way, the definition in the bill is a big improvement for US policy. Past legislation, like the infrastructure bill, only covered the process of making the hydrogen itself, ignoring one of the big reasons current “gray” and “blue” hydrogen methods are so dirty: their reliance on a natural gas system that leaks vast amounts of methane into the air. These leaks, which occur at every stage of the natural gas lifecycle—from the extraction well pads to the pipes running through suburban homes—have historically been poorly monitored and result in sharp underestimates of the fuel’s planet-warming effects.

The new hydrogen incentives pair well with new rules in the Inflation Reduction Act aimed at forcing the natural gas industry to clean up its act, says Ravikumar. The proposal includes penalties for producers that fail to plug up methane leaks. According to Ravikumar’s modeling, if the industry can drive leaks down to the numbers that avoid penalties—and crucially, be held to standards with enhanced monitoring and enforcement, which the bill also provides for—then the overall lifecycle emissions of blue hydrogen production would be well on its way to four kilograms. All it would take to get there is a moderately high rate of carbon capture and storage.

OK, so does that make hydrogen “clean”? Still depends. “I would consider that low-carbon today,” Ravikumar says, noting that 4 kilograms of CO2is somewhere between a quarter and a third of the amount produced by the current “gray” hydrogen processes. The challenge is projecting into the future. “If you’re asking the same questions 30 years from now, maybe that isn’t low-carbon any longer,” he adds.

In an ironic twist, a gas produced by destroying methane ends up letting more methane stay in the atmosphere.

To Grubert, while specific numbers, like the four kilogram cutoff, may appear to offer a clear definition, it’s difficult to hold companies accountable for lifecycle emissions. She prefers a definition of “clean” that’s rooted in specific production methods–ideally electrolysis, rather than natural gas. Even if the electricity powering electrolysis isn’t generated through totally clean methods now, what’s important is that it has a “plausible path” to zero emissions because the grid is getting greener every day. Relying on systems that produce natural gas offers no such path. “Investing in a bunch of infrastructure that doesn’t have a path to zero is a problem,” she says.

How this plays out will depend on how large the hydrogen economy gets. There is wide agreement that the fuel is a great tool for cleaning up parts of the economy that are the hardest to decarbonize, such as long-haul flying, which is more amenable to jet fuel than battery power, or steel production, which requires firing furnaces up to many thousands of degrees. This is what Ilissa Ocko, a senior climate scientist at the Environmental Defense Fund, calls the “no regrets” category. Ideally, that hydrogen would be produced with electrolysis. That’s expensive, but it can be worth the cost to decarbonize really tough industries.

Others have a more wide-ranging vision that would involve using hydrogen to do things like power cars or heat homes. “This is an all-of-the-above fuel,” Manchin said last year at a conference touting plans to produce “clean” (that word again) hydrogen from Appalachian natural gas. But critics argue hydrogen isn’t the most obvious candidate for those kinds of jobs. Increasingly cheap and powerful batteries and solar panels make electrifying homes and vehicles a more attractive option.

Ocko points to another problem: Even if hydrogen is produced in a clean way, it can still warm the planet. “Hydrogen is the tiniest molecule in existence,” she says—which makes it extraordinarily good at escaping from the pipes that carry it. There’s been little research or monitoring of these leaks, but a picture is emerging that shows when hydrogen gas is released into the air, it reacts with hydroxyl radicals—pairs of hydrogen and oxygen atoms—to form water vapor. That prevents the hydroxyls from doing another job: destroying methane molecules. In an ironic twist, a gas produced by destroying methane ends up letting more methane stay in the atmosphere.

Assuming a 10 percent rate of leaks—high, but a reasonable estimate—Ocko’s team found that replacing fossil fuels even with so-called green hydrogen would only cut warming by half over the next 20 years, though the benefits increase over time to an 80 percent reduction by 2100. (That’s because the effects of hydrogen in the atmosphere are short-lived, while carbon emissions last for thousands of years and accumulate.)

“This is very parallel with what we saw with natural gas,” Ocko says. In both cases, researchers have been able to track big plumes, but not all the little leaks that add up to substantial climate-warming effects. The more peripheral the uses get—like using hydrogen to heat homes or fuel up the cars—the more difficult those leaks are to monitor. “We’re very worried about that,” she says. “There’s no way to make those systems tight.” The other issue is that there are no commercial sensors available to detect such small concentrations of hydrogen, measured in parts per billion.

But those tools are coming, Ocko adds. “The key difference between the natural gas story and where we are with hydrogen is that hydrogen is in its infancy,” she says. In the IRA, the incentives to spur hydrogen production are just one tool of many in the climate arsenal, with billions more going toward electrification and overhauling the grid. The coming years will be about pushing the right uses and reining in the negative consequences. “We want to get ahead of the problem,” she adds.