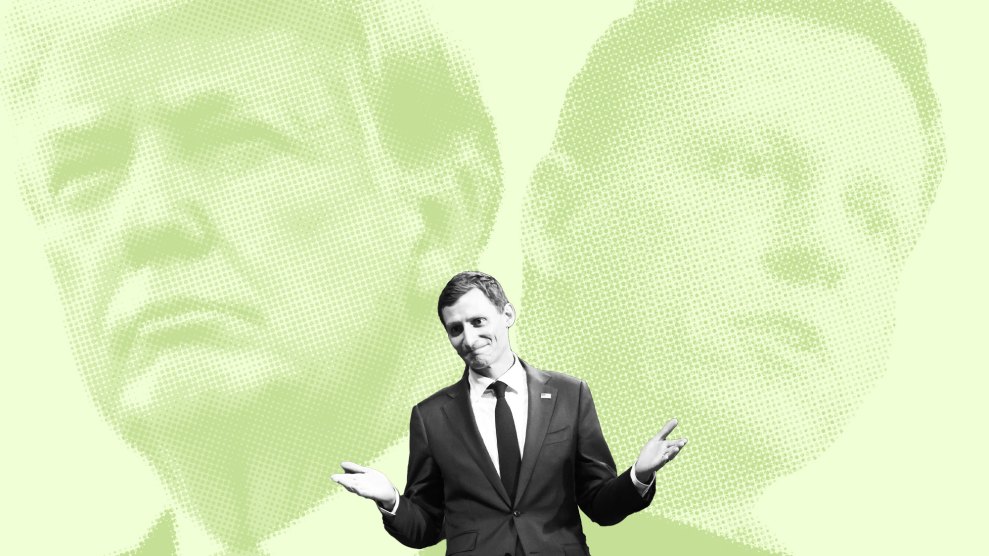 Blake Masters, a far-right disciple of Silicon Valley titan Peter Thiel who has echoed the ideas of an “absolute monarchist,” mused about retiring all government employees, and campaigned as the Arizona avatar of Trumpist nativism—losing in the process the respect of the best man at his wedding, with whom he longer speaks—has won the nomination to be the Republican nominee for Senate in Arizona.

Masters beat a competitive five-person field on Tuesday. As with just about everything else in his professional life, the first-time candidate has Thiel to thank. The billionaire put at least $15 million behind the 35-year-old Masters—who was his chief of staff and the president of his charitable foundation until March—and proved essential to the Donald Trump endorsement that secured Masters’ victory.

Masters will face Democratic Sen. Mark Kelly, the astronaut and husband of former member of Congress Gabby Giffords, in what is expected to be one of the closest races of the year. If Masters loses, Democrats have a decent chance of holding the Senate. If he wins, Thiel could have two former employees in the Senate: Masters and J.D. Vance, the Hillbilly Elegy author and Ohio Senate candidate whom Thiel has spent another $15 million boosting.

As I reported in a profile of Masters earlier this month, after spending much of his youth as a libertarian purist, Masters now positions himself as an America First ally of Tucker Carlson. Ever the venture capitalist, Masters sees the United States as another bloated company that could be turned around with the right investments. If the system most Americans call democracy ends up being disrupted in the process, that might just be the cost of doing business.

In practice, this has meant running a hard-right campaign that has attracted the support of run-of-the-mill Trump voters, outspoken white nationalists, and internet monarchists. After defending women’s right to choose for much of his life, Masters now calls abortion a “genocide.” Instead of calling illegal immigration “an ethical contradiction in terms” as he did in his anarcho-capitalist days, he put out a video reminiscent of The Camp of the Saints in which CGI migrants streamed through a gap in the border wall.

Old friends have been disgusted by his candidacy. “It makes me ache when I see what he writes and says,” says childhood friend Noah Gustafson. “It puts me in a state of depression.”

Collin Wedel, his best friend growing up and the best man at his wedding, remembers Masters as a Ron Paul superfan. These days, Masters admires Lee Kuan Yew, the dictator who transformed Singapore’s economy while also banning chewing gum. “It is shocking that he has moved to this sort of authoritarian, fascistic reverence for strongmen,” Wedel says.

Masters has essentially run two campaigns. The first has been the fairly typical play for the votes of Arizonans loyal to Trump. The other has been for the hearts of the young and mostly male members of the online right. That campaign has involved referencing Ted Kaczynski, the Unabomber; Curtis Yarvin, the self-identified “absolute monarchist” blogger who is friends with Masters and Thiel (and now a Masters campaign donor); and Sam Francis, the white nationalist columnist who helped provide a blueprint for Trumpism.

Both campaigns are working. The first because Masters is the Republican nominee, the second because Masters has become a hero to the many anonymous Twitter users posting memes about how he resembles Julius Caesar. They portray him as the vanguard of an anti-democratic reaction that will arrest American decline via a dictatorship of the post-liberatariat. They find much to admire in Thiel’s professed belief that freedom and democracy are incompatible.

Masters, Thiel, and Yarvin, their scene’s house philosopher, are all former right-wing libertarians who have come to accept the naivete of electoral abstinence. They are now obsessed with wielding the power of the state against their perceived enemies. For Masters, that can mean going after the social media and search companies that he accuses of throwing the election for Joe Biden, China, and a progressive oligarchy that includes everyone from the members of the Squad to “woke” generals.

America, according to the Masters plan, will be saved by hierarchy, not leveling the playing field. The goal is to seize power by yoking a fundamentally elitist project to the grievances of everyday Republicans. Although often referred to as a “populist,” it’s not a label Masters uses himself. His broadsides against the TED-Talk-set can sound similar to the critiques of the professional managerial class made from the left in books like Christopher Lasch’s 1996 jeremiad, The Revolt of the Elites. What gets discarded is Lasch’s essential point that, “Social and civil equality presuppose at least a rough approximation of economic equality.”

Masters frames the current moment in apocalyptic terms. “If we don’t do something now, the rule of law will soon be gone forever,” he said last year in an interview with the hard-right site IM—1776. “Anyone who questions the left’s narrative is going to be hunted down. I truly believe that.” He often says that America could cease to exist if Republicans lose the 2022 and 2024 elections. In its place, he’s warned of a one-world-state in which the left freezes bank accounts to shut down dissent. He’s mused about how the globalist ideology threatening to usher in “Global Communism” is a “pretty good candidate” for the Antichrist.

These are the kinds of convictions that lead a former anarcho-capitalist to run for a Senate on a platform of using state power to go on “offense,” to claim Trump won the 2020 election, and advocate for Biden’s impeachment. Yet, despite all his catastrophizing, Masters has said he is optimistic about the future. He thinks his side will win.