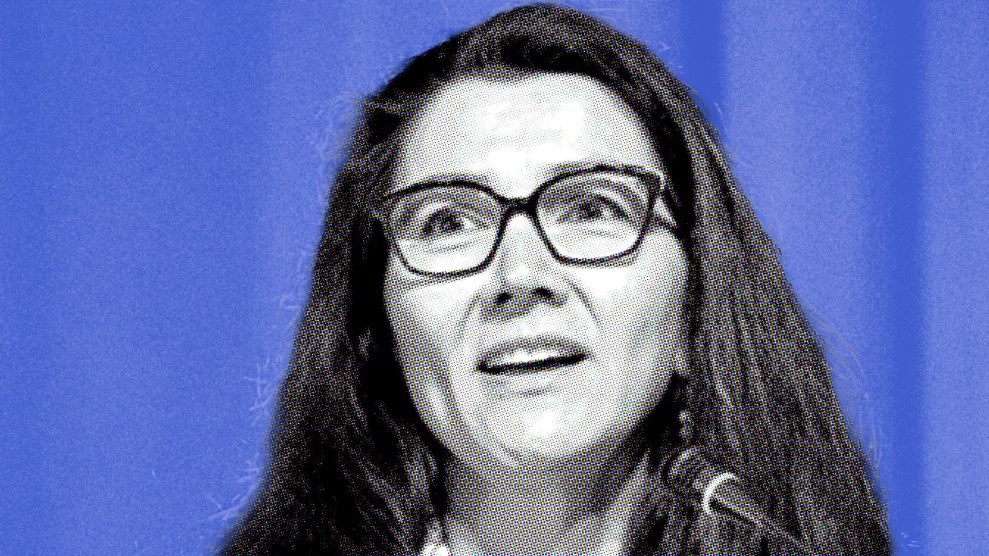 Peltola, 49, is Yup'ik, which is Alaska's largest indigenous community.Mark Thiessen/AP

Representative-elect Mary Peltola just made history. With a 51-49 upset victory over ex-governor Sarah Palin, confirmed Wednesday by the state’s Division of Elections, Peltola has won Alaska’s sole seat in the House of Representatives—making the former state legislator and fisheries manager the first Alaska Native person elected to Congress. She succeeds longtime GOP Rep. Don Young, a family friend whose death in office earlier this year triggered a special election. In March, when Young died, Peltola was a fairly obscure ex-politician vying with more than 50 challengers to finish his term. By August, polls pegged her as a clear favorite over the Trump-endorsed Palin, whose celebrity kept her at the top of early polls.

Peltola’s win was more than one kind of first. She also becomes the first Alaskan to win a ranked-choice election, a system that sends votes to second-choice candidates when voters’ favorites are knocked out. She joins a tiny club: Alaska is just the second state to adopt the system, which supporters call a “bulwark against extremism,” and this race was the state’s first to use it.

That change came into play when prominent independent Al Gross withdrew from the race unexpectedly—after landing one of four spots in the general election. Gross, Democrats’ favorite in Alaska’s 2020 Senate race, wouldn’t commit to caucusing with the Democratic Party. But his largely centrist voters broke for Peltola, and his withdrawal left a lopsided ballot, splitting conservative voters between two Republican candidates.

Peltola’s biggest challenge might have been Palin’s unmatched celebrity. Although Palin hasn’t held office in Alaska since 2009, when she abruptly resigned her governorship, she’s still Alaska’s best-known politician on the national stage. And Palin’s been a vocal player in the Trump movement, winning the ex-president’s consistent backing—Trump went as far as campaigning for her hours after the FBI’s August raid of his Mar-a-Lago home.

Alaskans, in any case, were keen to participate. State officials announced that they’d counted nearly 200,000 ballots in the open primary, the third-highest primary turnout in state history. There’s any number of reasons that could be: Palin’s notoriety likely drew both supporters and opponents, and the governorship is also on the ballot, with Republican incumbent Mike Dunleavy facing strong Democratic and independent challengers. GOP senior Sen. Lisa Murkowski is up for re-election as well—after landing a place on Trump’s enemies list by voting to convict him for his role in the January 6th attacks on the US Capitol. (Murkowski and her Trump-backed primary opponent, Kelly Tshibaka, both advanced to November’s general election.) The state has also kept the process remarkably accessible, with many voters able to vote early both by mail and in person, a key consideration for Alaskans in distant and rural areas.

Peltola is no stranger to the legislature. An Alaska state legislator since the age of 24, she held onto her state House seat for a decade, making friends—including Palin—on both sides of the aisle. She’s characterized herself as “moderate” and ready to work with Republicans in Congress. On the campaign trail, she avoided attacks on her opponents, drawing on Yup’ik values: “The region where I’m from,” Peltola told NPR during her campaign, “there is a big premium on being respectful, on not using inflammatory language or harsh tones.” But Peltola also campaigned on core Democratic issues, including abortion rights and the climate. And she’s been outspoken about sustainability, drawing on hands-on experience as a fisheries manager, with an emphasis on Alaskan communities most harmed by the climate crisis.

Campaign season isn’t over for Peltola—she’ll be up for re-election in November, when Young’s term ends, vying to hold the seat for a full two-year term. Win or lose in November, though, she’s sealed her place in Alaska’s political history.