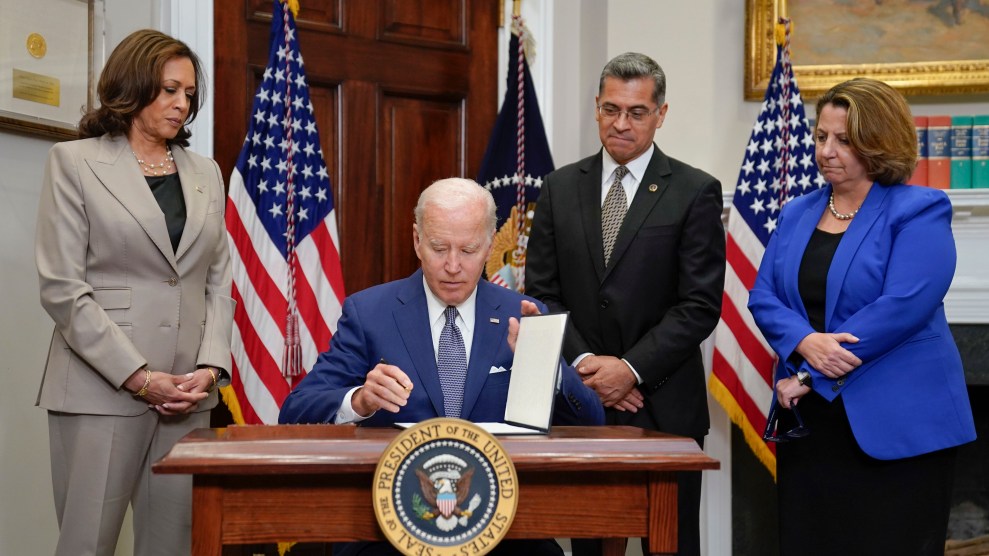 President Joe Biden signed an executive order on Friday that attempts to safeguard at least some abortion access for residents of states seeking to outlaw the procedure. The move comes as Democrats and pro-choice advocates have implored Biden to respond more forcefully to the Supreme Court decision overturning Roe v. Wade.

“We cannot allow an out-of-control Supreme Court working in conjunction with extremist elements of the Republican Party to take away freedoms and our personal autonomy,” said Biden in a speech from the White House, with Vice President Kamala Harris and Health and Human Services Secretary Xavier Becerra beside him.

The executive order is somewhat vague but directs Becerra to submit a report within 30 days that outlines his agency’s efforts to protect access to abortion medication and emergency contraception, ensure patient privacy, and expand legal options for people seeking reproductive care. The order also calls for better public outreach by the federal government so that pregnant people understand how to obtain the health care they need, and it creates a federal task force to protect access to reproductive health services.

To bolster legal representation for individuals seeking or offering abortions, Biden’s order directs the attorney general and White House counsel to recruit private pro bono attorneys, bar associations, and public interest organizations. “I’m asking the Justice Department, much like they did in the civil rights era, to do something, to do everything in their power, to protect these women seeking to invoke their rights,” Biden said, adding that attorneys would work to help abortion clinics and pregnant people who travel out of state for abortion care.

Amid concerns that law enforcement officials might use period-tracking apps and other online data to prosecute abortion seekers, Biden’s order also directs the Federal Trade Commission to take steps to protect people’s privacy. And it urges Becerra to explore additional ways of using the privacy provisions in the Health Insurance Portability and Accountability Act (HIPAA) to prevent the disclosure of sensitive health information to third parties.

Some reproductive rights groups welcomed the executive order. “Anti-abortion leaders across the country are working hard to intimidate abortion providers and those seeking care even in states where it remains legal, and these steps from the President will help push back against these dangerous scare tactics,” Melissa Fowler, chief program officer of the National Abortion Federation, said in a statement. Other pro-choice groups criticized the administration for not going further. Biden’s executive order “lacks the bold action we need to meet the growing needs of people around the country who are struggling to get abortion care with each passing day,” Sharmin Hossain of Liberate Abortion, a coalition of reproductive rights groups, said in a statement.

Over the past two weeks, Biden has reiterated that he lacks the power to restore the constitutional right to abortion after the Supreme Court removed it by overturning Roe. “The only way we can secure a woman’s right to choose and the balance that existed is for Congress to restore the protections of Roe v. Wade as federal law,” he said hours after the court’s ruling on June 24. “No executive action from the president can do that.”

In the days after the ruling, Democrats accused him of responding too tepidly, even though the White House had time to strategize after a draft of the court opinion leaked in May. Last week, Biden earned some praise from progressives when he said he supported overturning the filibuster in Congress to codify abortion rights into federal law. “Now we’re talking!” tweeted Rep. Alexandria Ocasio-Cortez of New York. “Use the bully pulpit. We need more.”

But even as Biden’s supporters demand more aggressive measures, the president has not embraced many of their proposals. Ocasio-Cortez and others have urged Biden to back efforts in Congress to expand the Supreme Court, to no avail. Sen. Elizabeth Warren (D-Mass.) has been among those asking the president to let abortion clinics operate on open federal lands in states where abortion has been prohibited, but the White House has rejected that idea, too. Others want Biden to get behind efforts to eliminate the Hyde Amendment, which prohibits the use of federal funds for abortions in most cases.

On Friday, Bloomberg Law reported that the Biden administration decided not to declare a public health emergency after the Supreme Court decision because of concerns that it would lead to lawsuits. Proponents argue that a public health emergency would have granted the Department of Health and Human Services new powers, potentially to ensure that medication abortions could be prescribed across state lines, or to protect physicians from criminal liability after performing the procedure.

HHS Secretary Becerra said last week that the administration must act cautiously. “Anything we do, we know we’re going to be in court the next day,” he said, according to Bloomberg Law. “And so we have to make it stick. We’re not going to over-promise because the worst thing you can do is over-promise early.” On Friday, Biden reiterated that one of the best ways to protect abortion rights would be by voting for pro-choice members of Congress. “The only way to fulfill and restore that right for women in this country is by voting, by exercising the power at the ballot box,” he said.

Hossain of Liberate Abortion said the administration’s decision to forgo a public health emergency was “infuriating.”

“Legal threats from the Right should not stop this administration from stepping up and protecting the health care of millions of Americans,” she said.

“While Roe was never enough to guarantee abortion access for all, its overturning has put the health of millions of Americans at stake,” Hossain added. “We will continue to hold President Biden accountable in this crucial moment and fight for policies that go beyond lip service and meaningfully expand access to abortion.”