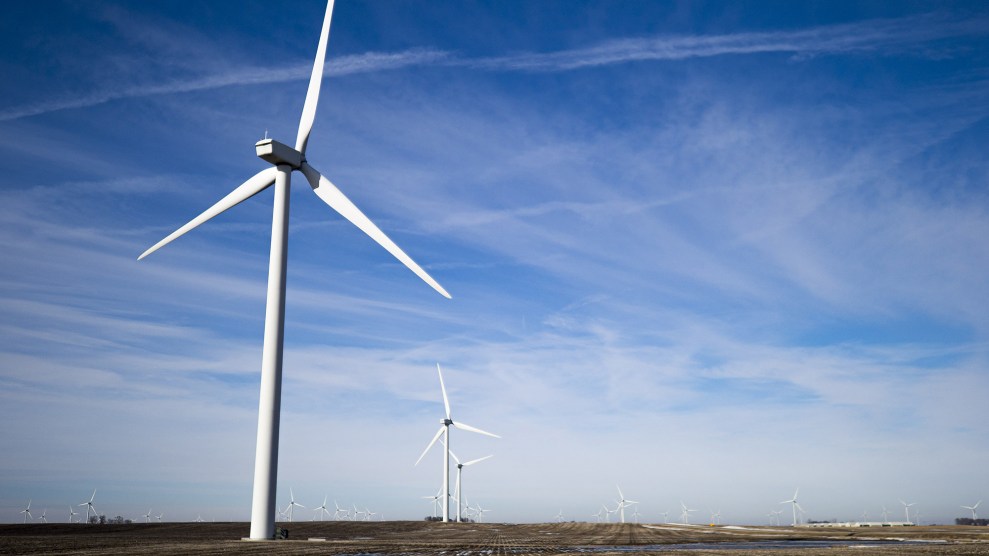 You can’t see them or hear them, but there are huge, hidden forces propelling the United States into the energy future. Last year, the Biden administration committed to eliminating half the country’s greenhouse gas emissions by 2030, a critical step in fighting climate change. Half sounds like a lot—and it is—but scientists think it’s doable.

Different teams have modeled how exactly this decarbonization might play out—by rolling out more solar and wind energy, for example, and more electric vehicles—and landed on several paths to cutting emissions in half in the next eight years.

A new paper in the journal Science took six of these scenarios and found that they share several major points: the keys to a clean-energy future. “Reducing our emissions by 50 percent is technically feasible, it’s economically viable, and there are massive additional benefits,” says Lawrence Berkeley National Laboratory energy economist Nikit Abhyankar, a coauthor of the paper. “So this is what we call a no-regrets strategy.”

The first area where those scenarios agree is that we’ll have to target the power and transportation sectors. To halve emissions, Abhyankar says, by 2030 the US grid will need to be running on about 80 percent carbon-free electricity (including hydropower and nuclear power), up from 40 percent today. The good news is that we’re already heading in that direction. In recent years, the US has been making significant progress in its effort to ditch coal for natural gas power plants. Yes, that gas is still a fossil fuel that spews carbon, but not nearly as much as coal.

Meanwhile, the costs of solar and wind energy are cratering. The price of solar technology has dropped 99 percent in the past four decades. And it’s getting less expensive for homeowners and utilities to store renewable energy: Between 1995 and 2018, the production of lithium-ion batteries jumped 30 percent per year while getting 12 percent cheaper each year. Earlier this month, the California utility PG&E commissioned a battery storage system that can provide power to over 200,000 homes for four hours. For homeowners, Tesla’s (very expensive) Powerwall battery can both charge a car and power a home during an outage, providing some independence from the grid.

“What we found is this transition might also avoid over 200,000 premature deaths,” and $800 billion to $1 trillion in healthcare costs.

The bigger challenge is the grid itself. The switch to renewables is happening on ancient infrastructure designed for on-demand energy generation—if you need more electricity, you burn more fossil fuels. The US grid is also actually three distinct grids with little interconnection: eastern and western grids, and one just for Texas. That means if demand spikes in one region and the sun isn’t shining or the wind isn’t blowing there, operators can’t import large amounts of power from elsewhere. This is the intermittency challenge of renewables: They’re critical to fighting climate change, but the grid just isn’t designed for them.

But, Abhyankar says, wind and solar power has gotten so cheap, and energy extraction so much more efficient, that this may not be a big problem in the short term. Extremely efficient panels and turbines can still generate enough electricity to make economic sense, even for regions that don’t have the number of sunny days Phoenix has, or the wind the Midwest has. That opens up the option of generating green energy locally, instead of having to import it across state lines. “Contrary to the conventional way of planning the grid—where you’ll choose the best of the best resource, site the renewable capacity there, and carry that electricity long distances—that trend has started changing because of the falling costs,” says Abhyankar. “And that might play a major role up to 2030 or so.”

That said, he adds that it’s not a permanent solution. A future grid that runs entirely on renewables needs to be more flexible, since operators won’t be able to burn fossil fuels to fill temporary gaps between energy demand and generation. (At night during a heat wave, for instance, people could be running lots of air conditioners, but there would be no sun to power them.) That means the infrastructure must be rebuilt to make it capable of shuttling renewable power over long distances. “In the long run, though, there’s just no alternative: We have to upgrade the transmission,” he says.

EVs may also prove to be valuable assets for smoothing out power supply and demand by forming a distributed network of car batteries that—along with home solar panels—grid operators could tap into when needed. “If we could leverage the batteries from electrical vehicles or batteries in homes, for instance, or if we could operate the rooftop [photovoltaics] of a set of customers and have them coordinate to provide a certain service to support our transmission network, that would absolutely help in trying to cope with intermittency,” says Patricia Hidalgo-Gonzalez, who is director of the Renewable Energy and Advanced Mathematics Laboratory at UC San Diego and wasn’t involved in the new paper. “That could alleviate the stress in the grid very dramatically as we have more and more renewables.”

The studies agreed on two more points: the economic and health benefits of decarbonization. Every step of the fossil fuel lifecycle, from extraction to processing to burning, is terrible for the human body. “There are massive non-economic benefits,” Abhyankar says of transitioning to clean energy. “What we found is this transition might also avoid over 200,000 premature deaths, and over $800 billion to a trillion dollars of other health [costs].” As more cars go electric, for example, air quality will improve, reducing the number of people affected by respiratory diseases.

The final point of agreement among the studies Abhyankar and his colleagues reviewed is that it’s not the expense that will hold back the deployment of renewables, batteries, and EVs. “The key point is: Cost is not going to be very high,” says Abhyankar. “In fact, some studies found it might result in significant consumer savings.” For instance, although putting solar panels on a home can be a costly upgrade—especially without a significant tax rebate—in the long run it will save the homeowner money.

The Build Back Better program would have juiced the manufacturing of renewable tech, but Sen. Joe Manchin torpedoed it.

Instead, the stumbling block is the policies needed to deploy them at a wider scale. Even though Democrats currently control Congress and the White House, they’ve struggled to pass substantial climate legislation. The Build Back Better program would have juiced the manufacturing of renewable tech in the US, among other climate benefits, but West Virginia Senator Joe Manchin torpedoed it. “It comes as absolutely no surprise that we’re nowhere near on track of meeting our target of reducing greenhouse gas emissions by roughly half by 2030,” says environmental economist Mark Paul of the New College of Florida. “I think that everybody across the climate and policy community is well aware that we’re going to absolutely blow past those targets, unless we have sizable action in Washington.”

And everywhere, for that matter. For instance, states could mandate that more of their energy generation come from renewables, while the feds could give bigger tax rebates for people to buy EVs and cities could invest in charging stations for them, especially in lower-income neighborhoods.

Another bottleneck, Paul says, is the lack of skilled labor to deploy and maintain solar and wind systems, and energy-saving home technologies like heat pumps. Public investments in trade schools could help boost this workforce. “This actually presents a pretty profound economic opportunity to revitalize the American working class that’s been struggling,” says Paul. “We just need policy to steer the ship in the right direction and ensure that this transition happens as quickly as possible.”