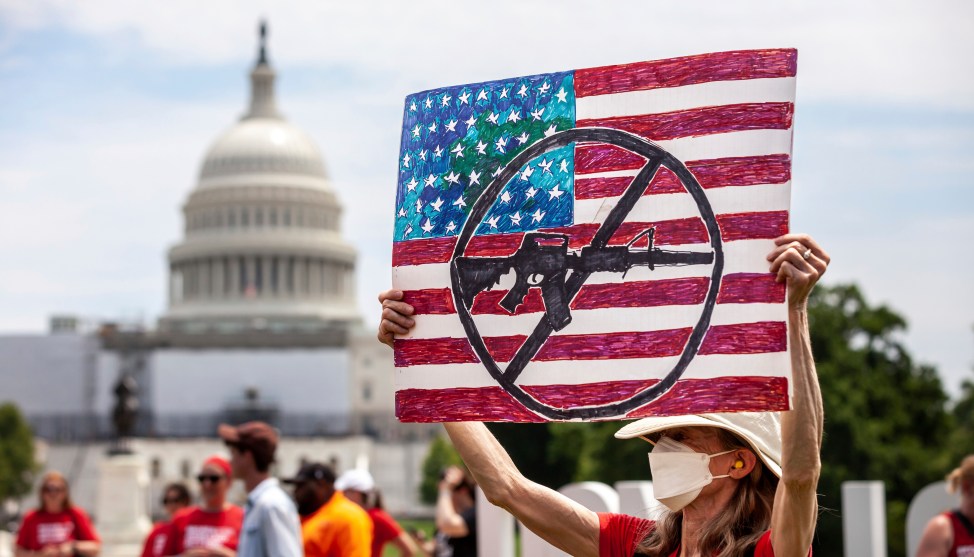 A demonstrator near the Capitol, June 8Allison Bailey/AP

On Sunday, a bipartisan group of 20 US senators announced a “commonsense” proposal for making progress on gun safety, including enhanced background checks for gun buyers under 21, funding for states to implement “red flag” laws, and greater protection from gun violence for victims of domestic abuse. The proposal further contains “major investments” in mental health services and resources for communities nationwide, and funding for school security and violence prevention programs.

“Families are scared, and it is our duty to come together and get something done that will help restore their sense of safety and security in their communities,” announced the group of lawmakers led by Democrat Chris Murphy of Connecticut and Republican John Cornyn of Texas, who were reportedly working on the legislative text along with Democrat Kyrsten Sinema of Arizona and Republican Thom Tillis of North Carolina.

Though by no means a done deal—as underscored by a somewhat tepid and hedged statement of support from Minority Leader Mitch McConnell—the announcement clearly aimed to soothe a nation deeply distressed by a recent spate of mass shootings, including the massacre of 19 school children and two teachers in Uvalde, Texas.

The agreement in principle falls well short of major legislative changes that a strong majority of Americans consistently say they want in public opinion polling, including comprehensive background checks for gun buyers. But if ultimately passed by Congress in the form outlined on Sunday, the plan would bring significant change in a political arena that has remained in an infamous state of paralysis for many years. Notably, the support of 10 GOP senators indicates a possible path to get beyond the threat of a filibuster.

Even if the full proposed set of measures goes through, however, the legislative details will of course matter greatly. Key questions hang over several in particular:

Enhanced background checks for buyers under age 21. Though still narrow in terms of overall gun buyers, the young demographic came grimly into view with the recent mass shootings in Uvalde and in Buffalo, New York, where the accused perpetrators both were 18 years old when they legally purchased AR-15-style rifles and other weapons. Senate Republicans already dismissed outright the idea of raising the gun buying age to 21; instead, the proposal describes “an investigative period to review juvenile and mental health records, including checks with state databases and local law enforcement.” But how long might that period last, and with what scope? It’s unclear how such efforts would gather information that frequently isn’t shared among disparate authorities or remains sealed under juvenile law. And many school and mass shootings have involved perpetrators who had no official record of criminal or mental health problems.

Funding for red flag laws in states. What the proposal calls “crisis intervention orders” (also known as “extreme risk protection orders”) was the subject of model legislation produced by the Justice Department in June 2021 and currently exists in 19 states. The laws seek to keep guns away from people deemed by a judge to be a significant danger to themselves or others. (A majority of mass shooters are both, being suicidal.) This policy goes straight to many Republicans’ desire to blame mental health for mass shootings—to fundamentally false effect—instead of access to guns. Initial research on the efficacy of red flag laws has shown promise for preventing violent outcomes, but there are also questions about how well the laws are understood let alone put to use. In the case of the Buffalo shooter, New York’s law was not applied. Nor was Indiana’s red flag law used in 2021 to keep legally purchased firearms from a 19-year-old who committed a massacre at a FedEx facility.

Protection for victims of domestic violence. This addresses the so-called intimate partner or “boyfriend” loophole, by expanding who can be disarmed if they are convicted for domestic violence or subject to a domestic-violence restraining order. The proposal would add to the National Instant Criminal Background Check System abusers “who have or have had a continuing relationship of a romantic or intimate nature”—and not just current or former spouses. Many women have been shot to death by such individuals beyond the reach of state laws, and violent misogyny is a rising behavioral factor among mass shooters. Yet, under what parameters that information in the NICS system would even be used toward possible enforcement of gun prohibition or removal remains wholly unclear.

“The language is still not negotiated” on the domestic violence measure, a person knowledgeable about the ongoing process told me on Sunday.

Additional hedging came from Republicans on Sunday. Sen. Mike Lee of Utah announced his interest in reviewing the pending legislation by first declaring that he “will always stand on the side of the Second Amendment.” According to reporting from Politico, a GOP aide warned that “the details will be critical for Republicans, particularly the firearms-related provisions,” and that “one or more of these principles could be dropped if text is not agreed to.”

Nonetheless, this may be a signal moment for one of America’s most fraught political problems. The Democrats and gun safety advocates appear to have embraced like never before a strategy of seeking incremental change at the federal level. And some Republican lawmakers appear to recognize that a nation frayed by all manner of existential turmoil may not do well to see the mass murder of innocent children again be met with congressional inaction, despite even some shocking indication of its acceptance.

If Congress does prove capable of passing bipartisan legislation that is recognizably close to the proposal announced on Sunday, that will go a long way toward breaking free from the entrenched national narrative of polarized deadlock and despair. Beyond the merits of the new measures themselves, it would create undeniable momentum for further progress on our nation’s unacceptable—and solvable—epidemic of gun violence.