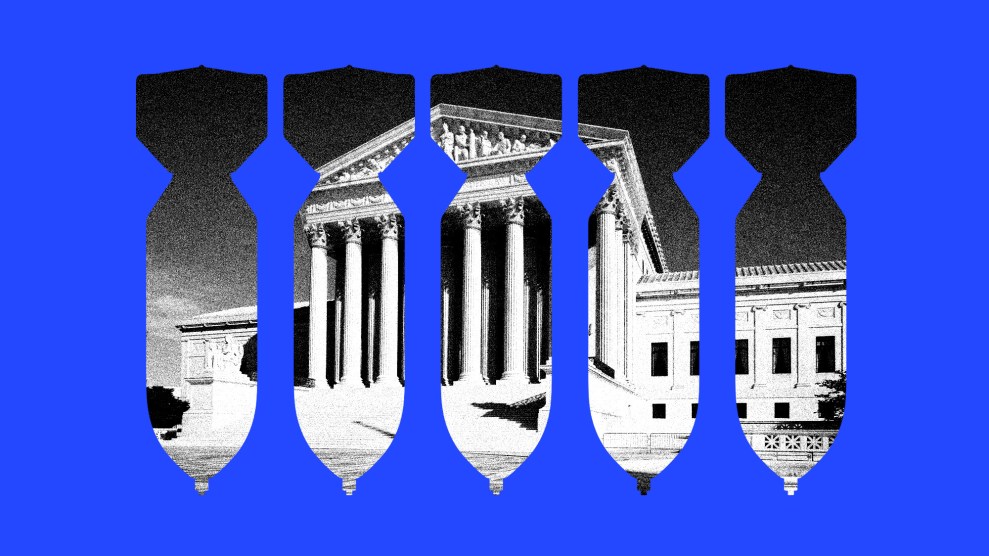 The Supreme Court’s conservative majority is waging a full-scale war on modernity. On Friday, the court’s six conservative justices ended the constitutional right to abortion that had allowed American women to enjoy full citizenship and equality (at least in theory) for nearly 50 years. We often talk about legal efforts to undo abortion rights with the phrase “setting back the clock.” That understates the radical project that today’s Supreme Court is undertaking.

To justify overturning Roe v. Wade, the conservative majority argues that abortion is not a right grounded in our history and traditions. Because the right to abortion rested largely on the guarantees of the 14th Amendment, which was adopted in 1868, Justice Samuel Alito notes in his majority opinion that the morality of the 1860s should be applied to pregnant people today.

“By the time of the adoption of the Fourteenth Amendment, three-quarters of the States had made abortion a crime at any stage of pregnancy, and the remaining States would soon follow,” he writes. Alito then takes his time machine back to 13th century England to build his case that abortion is not, historically, part of our tradition.

It doesn’t take a genius to poke holes in the logic here, or even question this framework. As the three dissenting liberals on the court point out, women were purposefully excluded from both the Constitution and the 14th Amendment by the men who wrote them. “Those responsible for the original Constitution, including the Fourteenth Amendment, did not perceive women as equals, and did not recognize women’s rights,” the dissent states. “When the majority says that we must read our foundational charter as viewed at the time of ratification (except that we may also check it against the Dark Ages), it consigns women to second-class citizenship.”

In other words: the majority’s reliance on the laws of centuries yore is not a bug, but a feature. Alito and his fellow conservatives on the court have embraced “history” to justify their decisions. History here belongs in scare quotes because the goal of a historical test for the court here seems to be to pick and choose the artifacts they want.

Alito and his fellow conservatives on the court have embraced “history” to justify their decisions. But the goal of a historical test for the court here seems to be to pick and choose the artifacts they want.

Alito did not choose, for example, to understand the 14th Amendment as a rejection of the forced pregnancies of enslaved people. There is ample historical evidence that the framers of the 14th Amendment intended the text to bestow upon freed Americans the right to choose when and with whom to create a family after slavery’s practice of rape, forced birth, and family separation. Nor did Alito choose to interpret English law from the Middle Ages that banned abortion after about 18 weeks gestation as pretty comparable to Roe’s viability framework; instead, illogically, he framed this history as a reason to overturn the right to abortion.

On Thursday, just 24 hours before the court overturned the 49-year-old Roe, the conservative majority invalidated New York state’s century-old law regulating licenses to carry concealed guns. Though New York’s law was enacted in 1913, apparently it was too modern for this court. Justice Clarence Thomas wrote that this old law did not fit the nation’s history, then set out a new test for gun legislation that must be based solely in history; his chosen “history” apparently starts and ends sometime before 1913. Once again, “history” is a self-serving exercise in cherry-picking. Thomas himself virtually admits to that by dismissing laws he deems too old and others that simply contradict his view. Within 24 hours, this cherry-picking has led to the contradictory situation of Thomas dismissing 13th century British common law to overturn a gun restriction, followed by Alito citing 13th century cases to justify overturning Roe.

But the contradiction is not the point. Rather, it’s what this hypocrisy demonstrates: that the Supreme Court will use whatever means necessary to take away what makes the United States a modern, functioning democracy. History is the tool, but only when it serves that goal. In his concurrence overturning Roe, Thomas explicitly called for overturning settled decisions that grant a right to contraception, intimate sexual relations, and same-sex marriage—all part of what makes us a modern society rather than a 19th-century style theocracy.

This is not a new project. Nine years ago, Justice John Roberts gutted the 1965 Voting Rights Act. This law is the lynchpin that actually guaranteed the right to vote to Black Americans, arguably helping America live up to its democratic potential. That right has been in retreat ever since.

It’s not just modern individual rights but also our modern government that are now on the court’s chopping block. Next week, the Supreme Court will decide a case about the federal government’s ability to fight climate change. That the Supreme Court is even considering this case is a prime example of its radical agenda and the haste with which it is already ushering it into existence.

At issue is the Clean Power Plan that President Barack Obama’s administration wrote but that is not being implemented any longer. Normally, you need an injury or at least a threat of one to be able to even bring a case to the Supreme Court. Yet this Supreme Court is expected to rule against a policy that isn’t injuring anyone since it is not even in force, in order to take a swing at the modern administrative state.

Suing to stop a policy that literally no longer exists, Republican attorneys general are asking the Supreme Court to limit the Clean Air Act and Congress’ authority to delegate policy decisions to the Environmental Protection Agency. It sounds boring and wonky, but the basics are these: With this case, the court is poised to roll back what federal agencies can regulate, including threats as existential and enormous as climate risk. It’s a regular theme for this court, and this case was clearly so tempting to the conservatives that they took the case even when it should be, as the justices like to say, moot.

This attack on the administrative state may sound small. But it heralds an ominous shift. At its founding, the United States did not have much of an administrative state. Certainly no EPA, not even a Justice Department. Over the last 200 years, Congress has slowly created agencies with the power to function as a modern government overseeing a large and complex country. While bureaucracy is imperfect and frustrating, it funds the vaccines we need during pandemics, ensures our rights, protects our air and water, regulates industries, collects taxes—the list is long, all the way down to trying to save the continued habitability of the planet. A government with a weak and shrunken administrative state cannot protect you—not the air you breathe or your right not to face discrimination or your ability to vote.

Yet with each new opinion, narrowing those protections seems to be the goal. The six conservatives on the Supreme Court will go as far back as they have to—to the 13th century even—to peel away the rights and structures that underpin modern life.