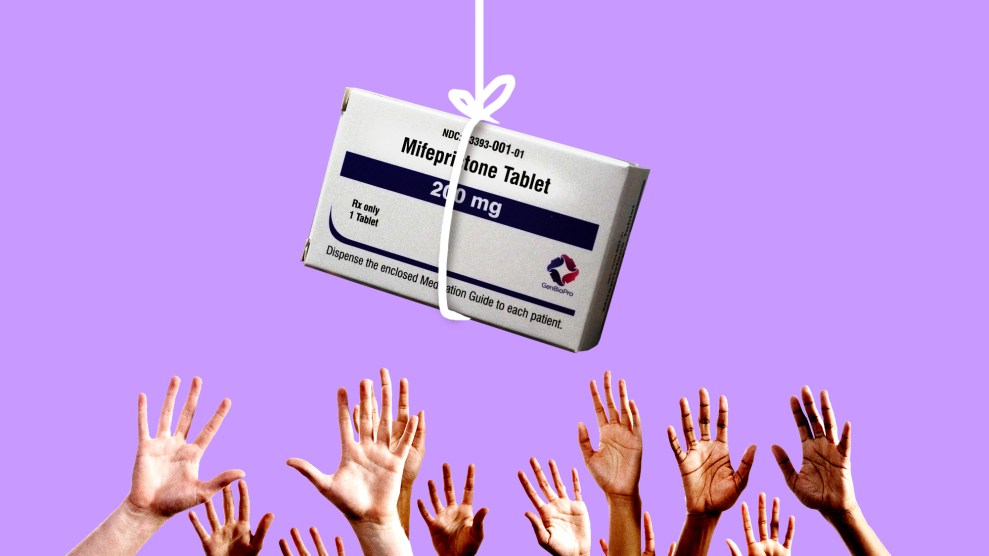 Ever since it became evident that Roe is likely to fall in the coming weeks, activists and folks who are generally interested in preserving abortion access have heralded medication abortion as the great solution to the end of legal abortion. And it’s true—mifepristone and misoprostol have a lot of advantages that will surely come in handy in our post-Roe future, the main one being that it’s a do-it-yourself, at-home abortion method that is safe and effective.

As Kimberly Inez McGuire, executive director at URGE (Unite for Reproductive and Gender Equity), said in a media briefing, “As we look at the impact of abortion bans, particularly disproportionately impacting communities such as Black and Brown folks, young people, as well as low-income communities, and immigrants, and trans young people, it is even more important that we consider the potential of self-managed abortion as an essential tool for accessing reproductive health care and autonomy for these marginalized communities.”

For the past couple of years, I’ve been asking activists: What about the people I know who could never access the medication?

Though there are other kinds of self-managed abortions, the major abortion care approach for these communities is abortion pills, according to McGuire and Abortion on Our Own Terms, a campaign she works with that seeks to help educate pregnant people about their options. McGuire and her colleagues understand that education is an important part of their campaign, especially when it comes to the safety of using mifepristone and misoprostol. “The biggest disinformation that we see out there is the idea that the loss of Roe v. Wade will lead to unsafe abortion, and it’s very rooted in this kind of pre-Roe [history] that’s really a different experience of abortion, of what that political context has looked like in the past,” she says. “First and foremost, it’s important that we recognize that we have safe and effective abortion medication pills that we can use today to self-manage our own abortions.”

However, despite even the best of intentions, medication abortion is not a magic fix. More specifically, it is not and will not be the solution for everyone. And the sooner we realize that, the sooner we can set about working toward desperately needed solutions.

I write this while staring at my “ABORTION PILLS FOREVER” poster, courtesy of Shout Your Abortion. But for the past couple of years, I’ve been asking activists: What about the people I know who could never access the medication?

There are the rural folks who don’t have reliable access to broadband internet, and who have shouldered heaps of disinformation and stigma about their bodies and sex for as long as they’ve been aware of the world around them. Estimates regarding how many Americans live in internet deserts vary, but they are all significant: The FCC says it’s somewhere around 14.5 million; the White House has it at 30 million; and BroadbandNow, a research group, says the FCC severely underestimates the number, putting it instead at around 42 million.

Then there are countless people who simply can’t risk getting caught—maybe a teenager, or someone with an abusive partner, not to mention anyone fearing prosecution in a rapidly changing legal environment that is eager to target abortion pills. Crucially, the Supreme Court draft opinion that was leaked regarding Dobbs v. Jackson Women’s Health Organization rolls back the privacy standard established in the 1973 Roe v. Wade ruling. “This is a uniquely powerful change in the digital era, raising urgent questions about data security and privacy. The tools so many of us rely on to engage with the modern world are largely trackable, making it easier for authorities (or even private individuals) to go after people seeking abortions, or those who are trying to help them,” writes Erica Hellerstein for .coda. “People’s search histories, text messages, location data, social media activity, purchasing records, and use of reproductive health phone apps will likely become standard evidence in legal cases against people seeking abortions.”

Telling people to simply go online, pay upwards of $250, and wait for the pills to come in the mail doesn’t align with the lived experiences and circumstances of most people.

To this end, people of color, who are disproportionately prosecuted unfairly under a criminal justice system that targets them for Blackness above all else, may understandably hesitate before trying to illegally—or even legally—acquire abortion pills. We’ve already seen Black birthing people prosecuted at a much higher rate for their pregnancy outcomes. In one study from the National Advocates for Pregnant Women, which analyzed 413 cases from 1973 to 2005 in which a pregnant person was arrested, detained, or faced some sort of legal intervention connected with their pregnancy, 59 percent of those cases involved women of color (including, as categorized in the study, African Americans, Hispanic American/Latinas, Native Americans, and Asian/Pacific Islanders). Fifty-two percent of them were African American. In the Southeast, where there has historically been a concentration of such cases, the numbers are even more dire; nearly three-quarters of the cases brought against Black women took place in the South.

Oriaku Njoku, co-founder of Access Reproductive Care (ARC) Southeast, says that telling people to simply go online, pay upward of $250, and wait for the pills to come in the mail doesn’t align with the lived experiences and circumstances of most people. “They’re not thinking about how Black and Brown bodies are consistently criminalized,” she says. (Njoku uses she/they pronouns.)

Nor are they thinking about how often the physical ailments of Black bodies are also ignored. Njoku experienced this first hand: She grew up in Kentucky as a Nigerian immigrant and endured heavy, painful periods that were repeatedly dismissed by local physicians. It wasn’t until she moved to Atlanta at 36 years old and found a Black OB-GYN that she was finally diagnosed with polycystic ovary syndrome. Njoku’s experience is just one example of the endless disparities that exist between rural people and those who live in metropolitan areas, between Black bodies with uteruses and white bodies with uteruses, which could impact the accessibility of abortion medication.

The truth is, a one-size-fits-all solution to abortion access simply does not exist because of the deep, lasting inequalities that exist in this country. Njoku points out that too often, people co-opt the reproductive justice mission without truly engaging with it and examining structural inequalities—like with what self-managed abortion will look like when abortion is no longer a constitutional right. “We’ve got to find a way to have the conversation without whitewashing or watering down the messaging because that is completely opposite from the original intentions of the founding mothers of reproductive justice,” Njoku says. “Access is not the same across the board.”

The team at Plan C has also been discussing ways to acknowledge and respond to these gaps. The national organization, which works to help people who wish to self-manage their abortions obtain mifepristone and misoprostol, has gotten the word out about their service, which comes with legal support, as well as phone and text assistance. They’ve paid for ads that drift to the top of Google searches and appear in the social media feeds of anyone who has been searching online about abortion resources. Perhaps most importantly, they have partnered with local abortion funds and reproductive justice organizations, hoping to position itself as a resource that community leaders can use. “We advocate for all options to be available, we advocate for someone to understand the range of options so that they can make a decision that’s best for them,” says Amy Merrill, co-founder and digital director at Plan C. “There’s going to continue to be a place for the local clinics that are still finding creative ways to serve, there’s gonna be a place for the abortion funds are helping people…it’s going to be a patchwork quilt of resources and as needs being met in all sorts of different ways.” As more legal barriers to care likely continue to crop up, like bans on receiving abortion pills through the mail, that patchwork will be even more necessary.

“There’s a lot of generational trauma and PTSD on the part of our elders, and they might not know how to talk about sex and consent and normal bodily functions with the young people in their lives.”

Even in a post-Roe America, the only way to really meet people where they are with the care that they need is through community-based organizing. ARC Southeast and Indigenous Women Rising (IWR) and other peer organizations are working to fund abortion and to educate traditionally marginalized communities about sex.

The communities that are most affected by the loss of federally protected abortion access must be centered in discussions about solutions, says Rachael Lorenzo, executive director at IWR. (Lorenzo uses they/them pronouns.) Empowering people with knowledge is a crucial part of that work. “We try to build our organization to build abolitionist values into our practice, and the concept of Land Back and how important our connection to the land is, as indigenous people, as the original stewards of the land, and how that plays into our reproductive health,” they say. “That means educating our relatives on forced sterilization, on picking up on cues of potential coercion around contraception,” for example.

It’s hard to imagine the community Lorenzo describes as having the resources, broadly, to order pills and self-manage their abortions, in addition to the stigma and historical wounds they already endure. “There’s a lot of generational trauma and PTSD on the part of our elders, and they might not know how to talk about sex and consent and normal bodily functions with the young people in their lives,” explains Lorenzo. Moving forward, IWR is hoping to expand its services, including, for instance, into midwifery. “Part of what we do is making sure that we’re creating space for them to use their own words, their own tradition and culture and oral history to be able to connect with people in their lives about sexual health.”

All of this is not to say that medication abortion shouldn’t be an option for everyone—rather that it cannot be the only option.