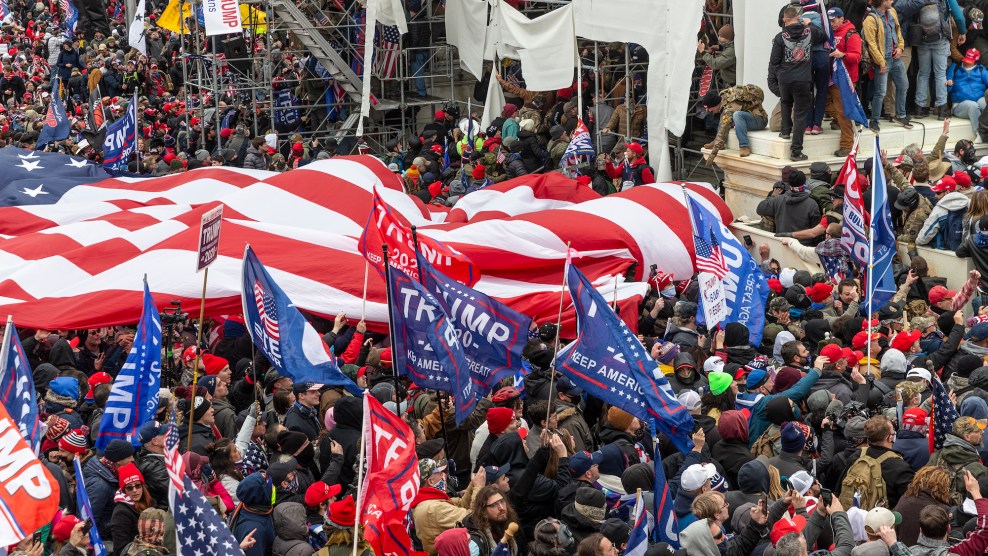 Pro-Trump protesters seen on and around Capitol building in Washington, DC on January 6, 2021. Rioters broke windows and breached the Capitol building in an attempt to overthrow the results of the 2020 election. Police used buttons and tear gas grenades to eventually disperse the crowd. Rioters used metal bars and tear gas as well against the police. Photo by Lev Radin/Sipa USA)(Sipa via AP Images

The Department of Justice informed the special congressional committee investigating the January 6, 2021 insurrection that it will not prosecute Mark Meadows, former president Donald Trump’s last chief-of-staff, or Dan Scavino, a high-ranking Trump aide, for refusing to comply with the committee’s subpoenas requiring them to testify about Trump’s involvement with the attack on the Capitol. The DOJ made the announcement on Friday evening, the same day a federal grand jury did indict a third Trump aide, Peter Navarro, for his refusal to comply with a similar subpoena.

Congressional subpoenas are similar to a subpoena from a court in that compliance with them is not optional. But congressional committees rely on the DOJ to actually pursue a contempt of Congress charge. Both Meadows and Scavino negotiated with the January 6 committee for weeks before eventually declining to come in for interviews with committee members, and Meadows did turn over thousands of records for the committee to review. In a letter to the January 6 committee, the DOJ was vague in its reasoning for not pursuing contempt charges against the two men, with a top agency official writing only that “based on the individual facts and circumstances of their alleged contempt, my office will not be initiating prosecutions for criminal contempt.” He also stated that the department’s review of the matter was over.

The committee said it was pleased with Navarro’s indictment but found the decision on Meadows and Scavino puzzling.

While today’s indictment of Peter Navarro was the correct decision by the Justice Department, we find the decision to reward Mark Meadows and Dan Scavino for their continued attack on the rule of law puzzling.

Navarro is an ally of former Trump advisor Steve Bannon, who has also been charged with contempt of Congress for his own refusal to testify before the committee. Since receiving his subpoena, Navarro has been antagonistic towards investigators, doing things like suing the committee, Speaker of the House Nancy Pelosi, and the U.S. Attorney for Washington D.C., claiming they have no right to investigate. Navarro has never cooperated with the committee in any way, refusing not just to testify, but also to turn over records. Meadows, Scavino, and Navarro have all attempted to claim executive privilege, a rule that shields top presidential officials from some congressional scrutiny, as their reason to not testify. But although Navarro served in the Trump administration, he was not as high in the ranks as both Meadows and Scavino at the time of the January 6 insurrection. Prosecutions for contempt of Congress are rare, but it appears that DOJ prosecutors may be drawing a line based on executive privilege, perhaps giving more credence to claims from higher-level administration officials.

Following his arrest on Friday, Navarro appeared outside of a Washington D.C. courthouse to complain that after openly defying a legal subpoena, and being criminally indicted for doing so, he had been treated by police as an actual criminal.

"They intercepted me gettin' on the plane and then they put me in handcuffs, they bring me here. They put me in leg irons. They stick me in a cell."

— Former Trump adviser Peter Navarro on being charged for contempt of Congress for defying a January 6th Committee subpoena. pic.twitter.com/GOee9R3GUB

Navarro’s arrest also elicited an outraged and rather bizarre complaint from Trump ally Rep. Louie Gohmert from Texas, who went on Newsmax Friday to complain that the DOJ is biased against Republicans because it has dared to arrest people for lying to the FBI. (Deceiving the FBI is a crime that the DOJ frequently prosecutes people for, regardless of political affiliation.)

Rep Louie Gohmert on Navarro indictment: "If you're a Republican, you can't even lie to Congress or lie to an FBI agent or they're coming after you" pic.twitter.com/8eIkkycukd