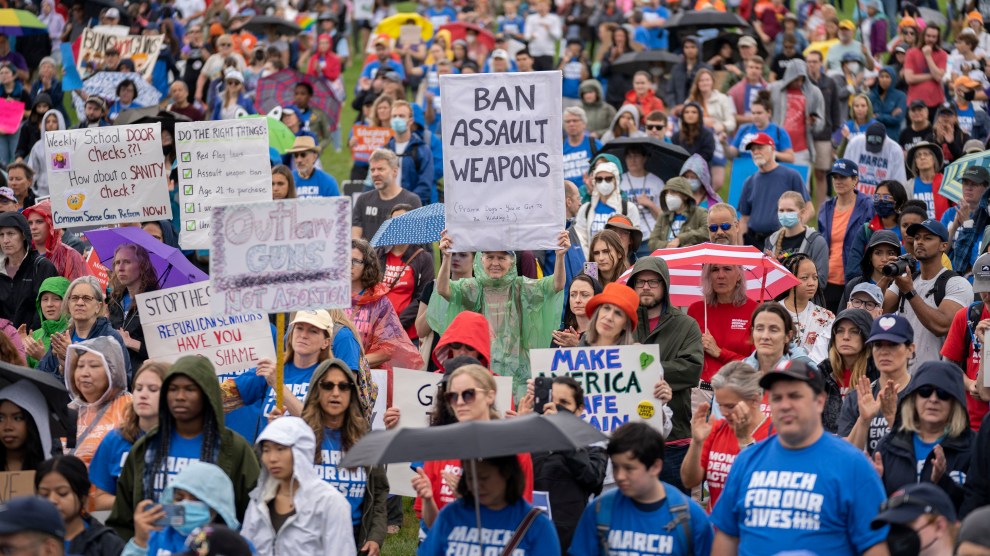 Thousands of people joined hundreds of protests across the country on Saturday to demand that lawmakers take action against the epidemic of gun violence in the United States.

After a series of mass shootings, including in Uvalde, Texas, and in Buffalo, New York, demonstrators staged more than 450 protests nationwide. The largest, in Washington, DC, was organized by March for Our Lives, the group founded by student survivors of the 2018 mass shooting at a high school in Parkland, Florida. President Biden expressed his support for their cause. “I join them by repeating my call to Congress: do something,” he tweeted.

The second March for Our Lives on the National Mall, standing against gun violence four years since the original, with thousands in attendance under the Washington Monument. David Hogg speaking: "All Americans have a right to not be shot, a right to safety." pic.twitter.com/MHirplU49l

As people filled the Mall in DC, Manuel Oliver, whose son, Joaquin, was one of the students killed in Parkland, addressed the crowd. “Our elected officials betrayed us and have avoided the responsibility to end gun violence,” he said, according to NBC News. Near the National Museum of African American History and Culture, organizers set up a field of artificial flowers to represent people who died in gun violence nationwide. Mayor Muriel Bowser drew cheers as she urged lawmakers to pass mandatory background checks and ban assault rifles. “We don’t have to live like this,” she said, adding that people in other countries “don’t live like this.” Some children in the crowd had traveled from Newtown, Connecticut, where a gunman killed 20 students and six adults at Sandy Hook Elementary School in 2012.

Mayor of D.C. Muriel Bowers is calling for gun reform and statehood for Washington, D.C. at the March for Our Lives protests.

"It is common sense to ban assault rifles in our country." https://t.co/PqOwvb6OyL pic.twitter.com/91rmfl19Ih

Kids, parents & activists from Newtown are boarding a 5am bus in Sandy Hook now to head down to DC for the March For Our Lives pic.twitter.com/T8EYpjeSGI

The rallies on Saturday came four years after March for Our Lives held its first major protest in Washington, after a gunman killed 17 people at Marjory Stoneman Douglas High School in 2018. Since then, more than 115,000 students have been exposed to gun violence on K-12 campuses during the school day, according to a Washington Post database. Last month, a gunman killed 19 children and two teachers at an elementary school in Uvalde. Ten days before that, 10 Black people were shot and killed at a grocery store in Buffalo. In addition to mass shootings, smaller shootings have spiked across the country during the pandemic: Homicides rose an estimated 30 percent in 2020, mostly from gun violence.

The heightened anxiety over the prevalence of shootings was on display during the rally in DC on Saturday. During a moment of silence for victims, some members of the crowd heard a noise that scared them, a person yelling near a group of counter-protesters, and many began to run away in terror. An organizer onstage urged the crowd to calm down and said there was no threat, but people remained shaken and some children reportedly cried.

The guy has been arrested but I was in the crowd when this happened and it was very scary. Heard a guy yelling during a moment of silence and then we were all running and trying not to get trampled. Kids were crying and traumatized. We left and saw a ton of cop cars. https://t.co/lfC6f9ql5j

Beyond DC, protesters in Parkland gathered outside an amphitheater and demanded lawmakers pass red flag laws. In Houston, people yelled angrily outside the office of Sen. Ted Cruz, who told reporters a few hours after the Uvalde shooting that he still opposed gun control measures. In the days leading up to the rallies on Saturday, March for Our Lives leaders scheduled dozens of meetings on Capitol Hill to urge lawmakers to take action.

Hundreds are shouting “F* Ted Cruz!” outside the senator’s downtown office after walking from Houston’s City Hall in a March for Our Lives protest for gun control. @tedcruz @FOX26Houston pic.twitter.com/6TgfmR6pgo

Congress has not passed any gun control measures during Biden’s term. The House of Representatives approved two background-check bills last year, but neither came to a vote in the Senate because Republican lawmakers opposed them. The House passed another bill on Wednesday that would raise the minimum age to purchase semiautomatic rifles and ban high-capacity ammunition magazines, but again, but it’s not expected to pass the Senate.

The slow pace of reform has frustrated many of the protesters. “We hear a lot about prayer, and prayer is wonderful,” Garnell Whitfield Jr., whose 86-year-old mother, Ruth, was killed during the Buffalo shooting, told a crowd during the rally in DC. “But prayer requires action. You pray and then you get up and walk.”