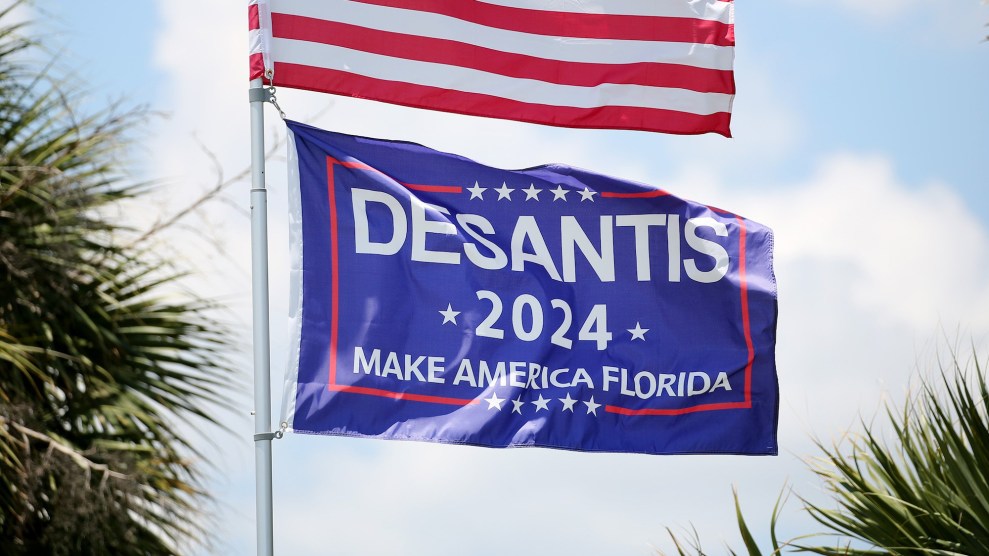 Apparently gas prices were not high enough to keep more than 1,300 boat owners from turning out Saturday in Florida for a boat parade supporting Republican Gov. Ron DeSantis. A flotilla of hundreds of boats traveled down the St. John’s River near Jacksonville during the Florida Republican Party’s quarterly meeting, honoring DeSantis with a type of maritime display first put on the radar by supporters of former President Donald Trump. The fact that DeSantis is now being feted with such unabashed outpourings of love and patriotic flags could be further evidence that it is DeSantis, not Trump, who may be the frontrunner in the 2024 GOP presidential primary. Trump surely won’t be pleased about his potential rival upstaging him in this way.

Boat parades became a common event in 2020 as the pandemic put a damper on in-person presidential campaign rallies, at least for a while. Organized by Trump superfans, the “Trumptillas” were never official campaign events, but were more organic initiatives in support of the former president. Trump was obsessed with the “beautiful boaters,” as he often called them, and aides reportedly showed him videos of the events to lift his spirits. The parades were frequently cited by Trump and his supporters as proof of his popularity despite his low poll numbers. Later, Trump reportedly pointed to them as evidence that he couldn’t possibly have lost the election to President Joe Biden. Indeed, even this weekend, at least one conservative news outlet covering the DeSantis boat parade cited the absence of Democratic boat parades as a sign that Democrats really don’t care for their politicians, or, for that matter, “freedom.”

Out at the ‘Desantis Boat Parade’ today: “You don’t see events like this coming from the Left or the Democrats. Is there a Biden boat parade?” pic.twitter.com/1LW6njXurV

But the boat parades have been something of a scourge for law enforcement, water safety officials, and other recreational boaters. A Daily Beast investigation last year found that the boat parades had left a wake of destruction behind them, far beyond what even made the news. Reporters turned up a number of people whose boats had been totaled or sunk in the wake of Trump boat parades in Tennessee and Oklahoma. Five boats sank in Lake Travis in September 2020 during a Trump boat parade near Austin, Texas, that created so much choppy water that the local police department fielded more than a dozen distress calls from boats that had been swamped, lost power or capsized. A month earlier, a Trump boat parade on the Willamette River in Portland, Oregon, sank the boat of a family that wasn’t part of the parade.

Trump boat parade overtakes the Willamette River in Portland, OR and sinks nearby families boat 🤬 pic.twitter.com/RMZbHHFuFW

The DeSantis parade seems to have proceeded without incident, and got rave reviews on Truth Social, Trump’s own social media platform. Trump so far has not commented on the event.