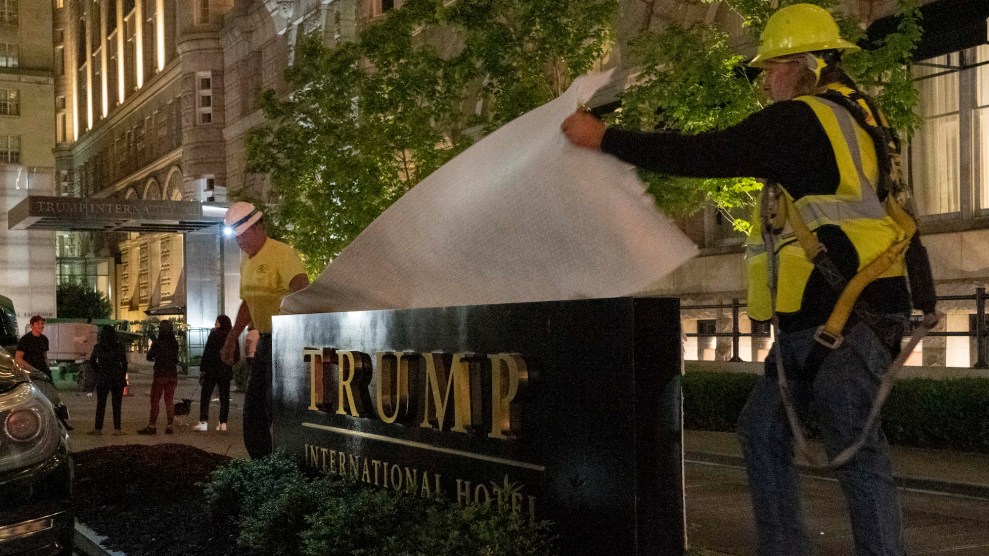 Workers cover the signage for the Trump International Hotel before removing it Wednesday night.Gemunu Amarasinghe/AP

When Donald Trump sold his luxury DC hotel this week, the new owners agreed to fork over a surprising amount of money. Florida-based CGI Merchant Group will pay a reported $375 million for the hotel—a price of more than $1 million per guest room, which would set a record in the nation’s capital. But according to a review of newly filed documents, much of the financing for the purchase will come from two other sources: a New York-based private equity firm with ties to the founder of Dell Computers, and a small, internet-based bank that has been among the few financial institutions willing to lend to Trump as his faltering business empire faces legal scrutiny.

The Trump Hotel has generally been regarded as well-run. But this week’s high sale price raised eyebrows because the property had struggled to attract steady clientele, even before the Covid pandemic decimated the hospitality business. While CGI said in an official press release that the deal was done through an investment fund it operates in partnership with retired baseball player Alex Rodriguez and several other wealthy individuals, paperwork filed with DC’s Recorder of Deeds reveals that the bulk of the money for the acquisition was borrowed from two other firms: the New York-based MSD Partners and Axos Bank.

Axos is a small, upstart bank best known for its consumer lending, but it has recently done several big deals with the Trump and Kushner families—in spite of the financial and legal trouble currently embroiling the Trump empire. Over the last four yeas, Axos has financed at least three real estate deals done by the Kushners. This March, Axos helped to refinance the Trump Tower for $100 million even as its owner, the Trump Organization, has struggled to win the trust of other lenders while facing legal investigations in New York. With these deals, Axos has extended a lifeline to the former president’s company as it tries to reestablish itself in the shadow of the pandemic and of its namesake’s toxic political brand.

News of the Trump Hotel’s sale was announced on Wednesday evening. The hotel quickly closed its doors, and within hours work crews were removing the Trump signage from the historic Washington, DC, building. (CGI plans to rebrand it as a Waldorf-Astoria hotel.) On Thursday morning, the deal was legally cemented with a flurry of filings made with DC’s Recorder of Deeds, including an agreement that shows the Trumps sold the lease on the building to a company linked to CGI Merchant Group. Other filings show that CGI borrowed $285 million to make this purchase happen. CGI got the loan from MSD Partners, an investment firm that runs private equity and real estate funds on behalf of a number of wealthy investors, including Michael Dell, the founder of Dell Computers. A spokesperson for MSD Partners confirmed that the firm provided the $285 million in financing for CGI’s hotel purchase.

But MSD, it turns out, was not alone. Other documents filed as part of the sale show that Axos Bank provided part of the loan that MSD gave to the hotel’s buyer, by acquiring what is known as a “senior participation interest.” This “interest” is just a portion of the total loan, but it’s structured in a way that it likely affords Axos the right to collect on the loan ahead of the other lenders involved in financing the hotel purchase. The spokesperson for MSD confirmed that MSD had, in turn, borrowed money from Axos, but the spokesperson did not say what portion of the loan to CGI came from Axos and what portion came from MSD. The spokesperson also said that Axos has invested in MSD loans on “several prior occasions.”

Representatives for Axos Bank did not respond to requests for comment, nor did the Trump Organization or CGI Merchant Group.

This transaction, then, reflects Axos Bank’s ongoing pattern of facilitating enormous transactions that are a financial boon to the Trump and Kushner families. The record-setting sale price of the hotel will allow Trump to pay off the $170 million he borrowed from Deutsche Bank to buy the hotel, while still pocketing a gain of tens of millions of dollars. And this lucrative payoff comes despite the hotel losing as much as $70 million during Trump’s presidency.

Axos is a relatively new bank. Originally founded in 1999 as the Bank of the Internet, it changed its name to BofI in 2011, and then Axos Bank in 2018. As of September 2021, it had about $13.4 billion in assets, a fraction of the several trillion dollars in assets that top banks like JPMorgan and Bank of America have.