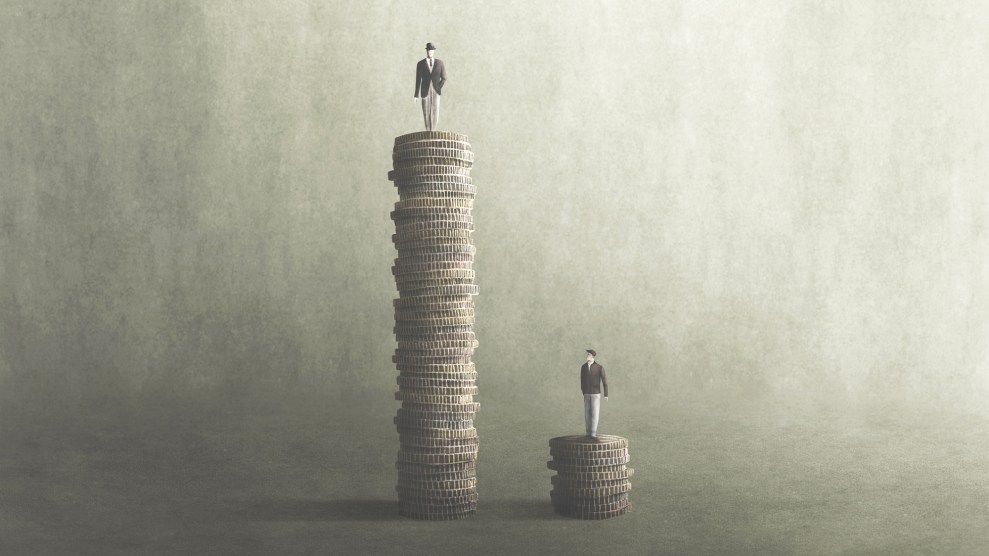 In an old Eastern European fable, God appears before an impoverished peasant named Vladimir and offers to grant him one wish—anything he wants. Vladimir is thrilled. But then God adds a caveat: Whatever he grants Vladimir, he also will grant to Ivan, Vladimir’s neighbor, twice over. Vladimir mulls this over a bit and then responds, “Okay, God, I want you to gouge one of my eyes out.”

We appreciate this punchline because it says something true about human behavior. Members of an advantaged group often resist helping a disadvantaged group even if the advantaged group stands to benefit as well. Social scientists call this a “Vladimir’s choice.” Even as we claim to support greater equality, we are hung up on protecting our relative advantage—even if it costs us in absolute terms.

In The Sum of Us, author Heather McGhee recalls how, when white American communities were forced to integrate public pools and parks, which flourished in the 1940s and 1950s, they would often opt to destroy the spaces rather than sharing them with their Black neighbors. “That’s what happened in Montgomery, Alabama,” McGhee told Vox last year. “In fact, they drained the pool, filled it with dirt, and closed Oak Park. They sold off the animals in the zoo, shut down the entire parks and recreation department of the city, and kept it closed for a decade. They were almost to 1970 before the good people of Montgomery even got to enjoy a public park again, all because of racism.”

White Americans—and men in particular—also tend to view efforts to reduce prejudice toward Black men and women as prejudicial to them. We’ve seen a lot of this lately amid all the conservative backlash against diversity and racial justice efforts.

There is an undeniable War on White People in The West.

But prejudice isn’t the sole ingredient in our Vladimir’s choices. Researchers have separately associated such advantage-protecting behavior with conservatism, ideological support for the status quo, a preference for social hierarchies, and a zero-sum worldview. Liberals, too, are susceptible to this “cognitive mistake,” explains Derek Brown, a UC Berkeley doctoral student who has co-authored an interesting new paper on the topic with assistant professor Drew Jacoby-Senghor at Berkeley’s Haas School of Business and Columbia PhD student Isaac Raymundo.

The research, published Friday in the peer-reviewed journal Science Advances, looks specifically at the zero-sum attitude of advantaged groups, whose members, even accounting for these other factors, tend to misperceive policies that increase equality as harmful to their self-interest.

“Self-interest…is a massive motivation for those advantaged in society to preserve the status quo insofar as it benefits them.”

This “leads negotiators to see their interests as unavoidably opposed to those of their counterpart, even when there exist opportunities to improve the well-being of one or both parties without harming either,” they write. “People even construe everyday transactions—such as buying food or purchasing a car—as resulting in a winner and a loser. These beliefs can cause policy-makers and voters to perceive that new policies will negatively affect them more than they will benefit others, even when the opposite is true.”

In the first set of experiments, participants from advantaged groups (such as white Americans, able-bodied people, men, and non-felons) were shown proposals that would improve the resources (better jobs and pay, for instance, or greater access to home loans) available to members of a less-advantaged group (such as Latino Americans, people with disabilities, women, and people convicted of felonies) without taking any resources from the advantaged group.

In some cases, the advantaged participants were told explicitly that the resources were not limited, and that the equality-enhancing proposals would not harm their own prospects. Even so, these participants, on average, viewed the proposals as harmful.

In one experiment conducted prior to the November 2020 election, the researchers surveyed white (non-Hispanic) and East and South Asian registered California voters about Proposition 16, a ballot initiative that would repeal an existing ban on affirmative action in public employment, contracting, and university admissions. These groups are advantaged in the sense that they are overrepresented, relative to the population, among public university students and public sector employees.

It’s debatable whether enabling affirmative action programs would have significantly harmed their chances of securing public sector jobs, contracts, and college slots for their families, but that was the perception, even though two-thirds of the group self-identified as liberal. The more threatening they perceived affirmative action as being to their self-interest, the more likely they were to say they would vote against Prop. 16—which was ultimately defeated, 57 percent to 43 percent.

In a pair of experiments whose results he found “especially striking,” Brown said in an email, the researchers created an arbitrary “advantaged” class. Participants were told they were being assigned to one of two groups, the Eagles or the Rattlers, on the basis of a (bogus) personality test. In fact, all were assigned to the Rattlers, who held a position of advantage over the (fictitious) Eagles.

“The misperception that equality is harmful is stubbornly persistent, resisting both reason and incentivization.”

The Rattlers were then presented with proposals that would narrow the gap between them and the Eagles by either 1) making both groups better off but helping the Eagles more (the win-win, equality-enhancing option) or 2) making everyone worse off, but hurting the Eagles more (the lose-lose, inequality-enhancing option). Counterintuitively, the Rattlers perceived the win-win scenario as slightly more harmful to their interests than the lose-lose proposal—and were not inclined to favor it as a policy over the lose-lose proposal.

The findings are “really compelling,” psychologist Paul Piff, an assistant professor at UC Irvine who studies how people’s relative wealth and status affect their attitudes and behavior, says in an email. People in general, and particularly elites, “tend to perceive inequality as something abstract and fairly distant,” he says. “Inequality-mitigating policies are often framed in terms of policies to help the poor, which isn’t necessarily all that motivating for (some) folks. In a sense, then, combatting inequality rarely appeals to self-interest, which is a massive motivation for those advantaged in society to preserve the status quo insofar as it benefits them.”

Brown and his co-authors use the word “grim” to characterize their results. “The misperception that equality is harmful is stubbornly persistent, resisting both reason and incentivization,” they write—even when scarcity concerns are addressed and people are told that a more equitable policy won’t affect their opportunities. “This emerging body of work suggests that inequality may endure primarily because people fundamentally misunderstand the reality of the disparities weighing down their society.”

In a second Eagles-Rattlers experiment, the Rattlers were presented with two options for reducing inequality between the groups. In the “unharmful” option, the Eagles were given more resources without any change for the Rattlers, whereas the “harmful” option involved the Rattlers getting less, with no change for the Eagles. The researchers wanted to see whether, if presented with side-by-side options, people would recognize that the unharmful one was the more rational choice. And while the Rattlers did, in fact, choose that option as a matter of policy, they still perceived it as significantly more detrimental to their interests than the harmful option.

“I would advise policymakers that while backlash is likely unavoidable, the change itself has to be the justification.”

On a positive note, the researchers discovered that members of advantaged groups are far more amenable to policies that reduce inequality within their group, which could help explain why some countries that are more racially homogeneous than the United States—like the Scandinavian nations—have been more successful in enacting equitable social policies.

American policymakers might take advantage of this, Brown and his co-authors suggest, by promoting national unity. Of course, Republican lawmakers have increasingly done just the opposite—pitting groups against one another by gender, ethnicity, religion, citizenship, and party affiliation—with no end in sight.

Like most papers, this one concludes with some version of “more research is necessary.” And in this case the preferred focus seems pretty obvious. “A critical next step,” the researchers write, “concerns how the negative effects of zero-sum equality perceptions can be averted or how we can make progress toward equality despite these misperceptions.” Researchers also, they write, need to gain a better understanding of “how advantaged groups can be convinced to relinquish their relative advantages even as doing so inherently feels similar to a material concession.”

“This set of studies certainly doesn’t paint an optimistic picture,” Brown concedes in his email. “I would advise policymakers that while backlash is likely unavoidable, the change itself has to be the justification and motivation to create equality policies. The risk is worth the reward, especially when creating a more equal and equitable society is on the table.”