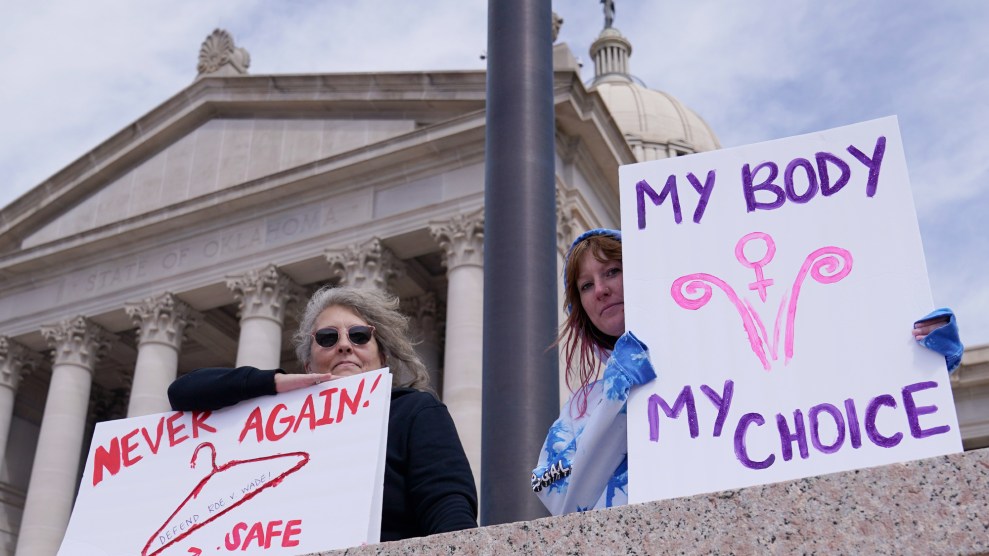 On Thursday, the Oklahoma House passed a bill banning nearly all abortions in the state. Like a recent ban passed in Texas, which barred abortion after six weeks, the law will be enforced through private civil action. And Oklahoma’s bill takes things even further by banning abortion beginning at fertilization. It will take effect immediately upon being signed by Republican Governor Kevin Stitt.

The Oklahoma bill allows private citizens to file lawsuits against anyone who performs an abortion in the state or “knowingly engages in conduct that aids or abets the performance or inducement of an abortion” there. A plaintiff stands to receive at least $10,000 for winning a lawsuit against an abortion provider or other person involved in assisting a patient.

The Oklahoma bill takes things even further by banning abortion beginning at fertilization.

This ban—the latest of three abortion restrictions passed in Oklahoma just this year—is modeled after a Texas bill that took effect last fall. The Texas version has already devastated abortion access in the state. Given the precedent of the Texas bill and a similar Oklahoma bill that passed earlier this month, the latest Oklahoma ban is expected to withstand legal challenges, and is set to become the strictest restriction on abortion in a nation where Roe v. Wade is still in effect.

Before the Oklahoma House voted on the bill, Democrats pressed Republican State Rep. Wendi Stearman on the consequences of a ban beginning at fertilization. Rep. Stearman’s answers to questions about how the bill could impact IVF treatments or affect patients during the resulting litigation did little to clarify the potential impact of the bill. But she was crystal clear when Democrat Forrest Bennett asked how the state might support parents forced to have a child they do not want. “Most parents who seek abortions are already parents who know how much it costs to raise a child,” he said. “If they have no choice but to have that child, do you not agree that a state like Oklahoma, that values life so much, should do everything in its power including funding and financing that child if there is no choice?”

“No,” said Rep. Stearman, “I do not believe that is the state’s responsibility.”

The impact of the ban will reach far beyond Oklahoma, according to Elizabeth Nash, a state policy expert at the Guttmacher Institute. Texas’ six-week abortion ban led patients to seek care in surrounding states, including Oklahoma. Now, most Oklahomans seeking care will be forced to flee their state as well, as the bill only provides exceptions for rape or incest, or to save the life of the mother. This is likely to drive up wait times in states where abortion is still legal. An appointment that last year could’ve been scheduled in two or three days time now might require a three- or four-week wait. “The number of abortion clinics have been declining for decades,” says Nash; “there is no give in the system.”

Oklahoma’s new ban comes as providers are scrambling to prepare for the Supreme Court decision this summer that will likely overturn Roe, according to a draft opinion leaked earlier this month. When that decision comes, Oklahoma is one of 25 states that could immediately ban abortion. Nash believes that though activists have “been trying to raise the alarm for years,” this reality has been difficult to grasp for many who have felt secure in having abortion rights. “It doesn’t square with their understanding of the world,” she says, “and it shouldn’t. Because abortion bans shouldn’t exist.”

Update, May 25: Gov. Kevin Stitt signed the Texas-style total abortion ban. The law, enforced through private civil action, is the strictest abortion ban in the nation.