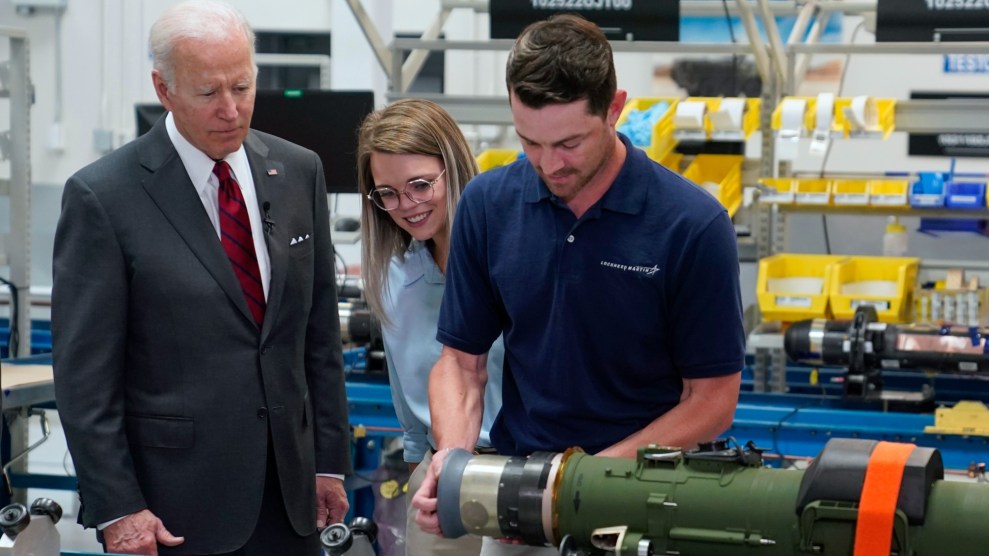 In the little more than two months since Russia invaded Ukraine, the United States has committed $14 billion in money and weapons to the Ukrainians. That’s an extraordinary sum, more than three times the amount of US aid Ukraine has received since 2014, the year Russia annexed Crimea.

But last week President Joe Biden blew past that figure. He asked lawmakers for $33 billion of aid, consisting of defensive weapons and economic assistance. If Congress approves Biden’s request, the US government will have sent Ukraine $47 billion in less than a year, more money than all but a handful of countries have ever received, in total, from the United States.

“It is almost unprecedented to shovel that much aid to one country in such a short amount of time,” William Hartung, a senior research fellow at the Quincy Institute for Responsible Statecraft, told me. Only four countries have received more than $30 billion in lifetime aid from the United States, and two of them—Iraq and Afghanistan—were the site of lengthy US conflicts.

Biden is requesting $33 billion in aid to Ukraine, which is more money than the US has sent all but four countries *in total* since 1946 https://t.co/ALx5dlIqyd

The extent of US involvement in Ukraine has been hotly debated from even before Russia’s invasion. Biden pledged to not involve US troops in the fighting and said their movement in the region would be purely defensive. “We will not fight a war against Russia in Ukraine,” Biden said in March. “Direct conflict between NATO and Russia is World War III, something we must strive to prevent.”

In order to stay out of a direct fight with Russia, Biden has ignored Ukrainian pressure to institute a no-fly zone and rejected a Polish plan to transfer fighter jets to Ukraine. But when it comes to military and humanitarian aid, he has been remarkably less inhibited. Even before his $33 billion request, Biden had approved the shipment of anti-tank and anti-aircraft weapons, but also rocket artillery and “more than 50 million rounds of ammunition.”

“The amount of weaponry going to Ukraine, at the pace it is going, is spectacular.”

Ukraine has received a variety of other weapons from more than two dozen other countries, but the United States by far is the biggest contributor to lethal aid, according to a tracking sheet maintained by the Forum on the Arms Trade. Even countries like Germany and Italy, which were reluctant to get involved in the conflict, have sent weapons like Stinger surface-to-air missiles.

“The amount of weaponry going to Ukraine, at the pace it is going, is spectacular,” said Jeff Abramson, a senior fellow at the Arms Control Association who has helped maintain the tracking sheet.

The Ukrainian military has more experience dealing with Russian or even Soviet-era weapons, so some countries have reached deep into their arsenal to find appropriate weapons to send. Because many of these weapons require “nonstandard” ammunition—meaning it does not meet NATO’s specifications—the State Department issued an emergency declaration last month permitting their transfer.

Military aid to Ukraine has been a curiously potent issue in US politics, serving as a central component to Donald Trump’s first impeachment. But well before Trump tried to leverage US aid as a way to acquire political dirt on Biden’s family, Barack Obama resisted sending Javelin missiles to Ukraine as the country fought off Russian aggression in 2014—overruling a big chunk of his national security team in the process, according to the Washington Post.

That moment seems like a distant memory now that Ukraine has become one of the top recipients of US aid in history. On Tuesday, Biden even visited a Lockheed Martin plant in Alabama to watch the manufacturing of Javelins up close. “You’re allowing the Ukrainians to defend themselves,” he said there, “and quite frankly, they’re making fools of the Russian military.”

“There’s so much going in, and it’s not that big of an army. Is it able to effectively use, maintain, and manage the weaponry?”

With Biden’s support, the spigot of aid does not seem to be turning off anytime soon. “We’re still in an escalatory phase of this war,” Abramson said. As the United States continues to play a key role in supporting the Ukrainian resistance, experts like Abramson hope a government watchdog—perhaps a special inspector general like the one Congress appointed during the Afghanistan war—to ensure US aid is being spent appropriately. “There’s so much going in, and it’s not that big of an army,” Abramson said, referring to the Ukrainian military. “Is it able to effectively use, maintain, and manage the weaponry?”

Defense contractors looking to benefit from Biden’s aid request certainly hope so. While first-quarter defense earnings actually declined due to weapons makers cutting ties with Russia, industry leaders expect those profits to rebound thanks to Biden’s massive investment. On an earnings call last week, Raytheon CEO Greg Hayes said defense spending, which was already set to increase before the Russian invasion, is on a better trajectory “than what we had expected.”

It’s still unclear what that trajectory will look like should the war drag on into a stalemate. Will US objectives shift in a full-fledged proxy war against Russia? Defense Secretary Lloyd Austin has talked about weakening Russia so it cannot launch a similar invasion. Is that now the primary US goal, or is Biden still intent on avoiding direct conflict with Russia? He will ultimately need to articulate those limits, but as Hartung said, a debate on rolling back US involvement “doesn’t seem to be in the cards now in Washington.”