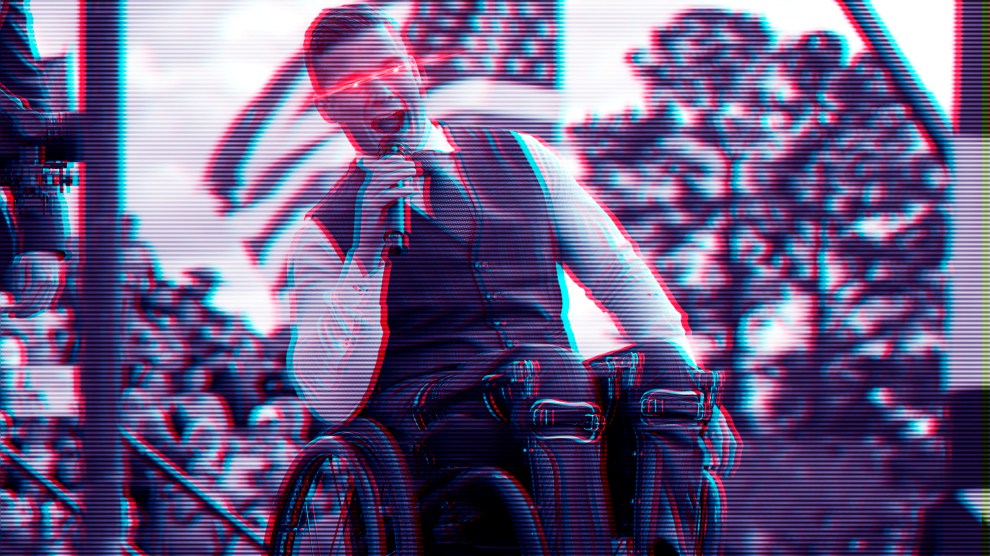 In March, a friend texted me a screenshot of a Twitter Spaces conversation about what looked like a potential new movement on the online right: “Dark MAGA.” No one had covered it yet. I had the coveted chance to break some news. Except, there was a snag: After I started looking around it was clear there wasn’t much to “Dark MAGA.”

Despite the title of Twitter Spaces conversation claiming “Dark MAGA is inevitable” it became obvious that the conversation was just a bunch of amateurs riffing with no clear point beyond saying ableist things like “DeSantis is cringe and most of his supporters probably have autism.” The “DarkMAGA” hashtag yielded a few memes with less likes than even my tweets get. Yes, the memes were—as  a screenshot of an Urban Dictionary entry  described—showcasing a glee for retribution that supposedly “will be embraced by Donald Trump when he imminently returns to office… as it is now time for revenge, time to punish and kill those who have been ruining the country.” But, honestly, it was not anything with enough traction to warrant a story.

Most of the posts featured laughably bad illustrations and photoshop designs. Many were lazy amalgamations and slightly darker retreads of the fashwave memes (a mashup of neon-drenched 80s vaporwave, with pro-fascist and/or pro-Trump messages) that had been percolating the right-wing internet since Trump’s first presidential run. After 45 minutes of rooting around, I had seen enough. Maybe Dark MAGA would become something worth publicly scrutinized, but it wasn’t that moment.

Then, on Thursday, it started trending on Twitter again, after the freshly minted lame-duck Congressman Madison Cawthorn wrote in the caption of an Instagram post that it’s time for “Dark MAGA” to truly take command.

Damn, did I miss its growth? I wondered of “Dark MAGA.” I checked again.

Searching “Dark MAGA” in the dozen or so right-wing and Trump groups I follow on Telegram barely shows any mentions of it. One group solely dedicated to posting memes about “Dark Maga” has a mere 187 followers. Its presence on Reddit is slightly more robust—all the way up to almost 3,000 members. It barely shows up on Twitter. Though this might be the result of some sort of enforcement on Twitter’s part—searching the #DarkMAGA hashtag yielded only two results in Twitter’s top tweets, even though the phrase was trending on Thursday. (The company did not respond to my asking them out this.)

The most significant references I could find to Dark MAGA were in a Newsweek and Business Insider explainer of it as a phenomenon. The two explicit “Dark MAGA” memes included in Business Insider’s piece had a total of eight likes between them.

Sometimes metrics don’t fully explain the persistence and commitment of movements. Nick Fuentes is banned from most major platforms, and his followers who are still on them have a limited presence. But they are committed and persistent and have influence in shaping some segments of real-world politics.

Still, I couldn’t find any quantitative or qualitative metrics that suggest that there is a groundswell of support for Dark MAGA. Or, frankly, that it is much of a thing at all.

At least one bit of analysis even suggests that the most quantitatively useful moments for Dark MAGA have been mainstream press coverage. Tim Squirell, writing for the London think thank Institute of Strategic Dialogue, found that as of May 17, Twitter data showed that the largest spike in mentions of Dark MAGA came from the Newsweek article on it, instead of the supposed Dark MAGA community itself.

“If Dark MAGA had not been covered in the mainstream media, it is likely that its presence would have continued to bubble under the surface of the internet, with users in more niche spaces arguing about whether it is an op while producing low-quality memes,” Squirrell wrote, lamenting that at that phase in its development Dark MAGA might have been helped by the oxygen it received from mainstream press coverage. Would Madison Cawthorn have figured out what it was at all without articles about it?

And even if Dark MAGA is on its way to becoming something, it’s unclear how this is different from already existing segments of the normal MAGA world. QAnon already calls for the mass arrests and in some cases, murder of liberal elites. MAGA faithful showed up at the Capitol on January 6th, 2021 with a massive noose.

Regardless, the underlying message and mission of Dark MAGA is something to potentially be concerned about, if it were to become anything. Attempts to make more explicit calls to violence, even if they tread on very worn territory, are never good. It’s just not clear that it is anything right now. And if Dark MAGA does end up becoming anything, it will be because of the mainstream institutions and figures like Cawthorn who have blasted more life into it than the original posters themselves.