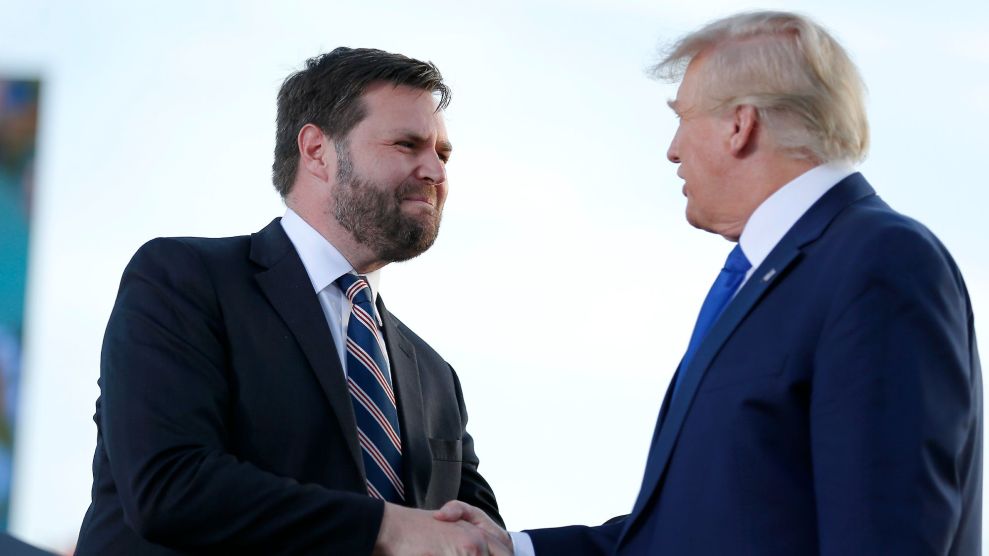 In 2016, J.D. Vance’s memoir Hillbilly Elegy received an enthusiastic reception from liberal commentators, many of whom viewed it as a window into the white working-class voters who’d recently propelled Donald Trump to victory.

One especially effusive New York Times review described the work as a “compassionate, discerning sociological analysis of the white underclass that has helped drive the politics of rebellion.” Vance was featured at a Brookings Institute event on social immobility alongside legendary sociologist William Julius Wilson. Vox founder Ezra Klein invited Vance on a podcast for a wide-ranging conversation, where, at one point, the two discussed classist “microaggressions.”

During this period, Vance’s rhetorical style was classically academic—articulate, nuanced, and peppered with caveats. He was also a passionate anti-Trumper. He condemned the former president as “an idiot,” described himself as a “Never Trump guy,” and messaged a friend that he vacillated between thinking that Trump was a “cynical asshole” and “America’s Hitler.”

Lots has changed since then—most notably Vance himself. One insurrection and polarizing film adaptation of Hillbilly Elegy later, the Yale Law-graduate and former venture capitalist has grown out his beard and dived into an Ohio Senate run. He’s also adopted an explicitly Trumpy public persona: thundering against wokeness, the media, and the “childless left.” One particularly alarming Vanity Fair article depicted Vance palling around with radical right-wing blogger Curtis Yarvin, who once wrote favorably of installing a “national CEO, [or] what’s called a dictator.”

Vance also managed to secure a coveted endorsement from “America’s Hitler” himself: Donald Trump, who the candidate now calls “the best president” of his “lifetime.”

With Vance the frontrunner for today’s GOP primary for the Ohio Senate, here’s a (non-exhaustive) recap of his most controversial comments:

During a conference at the Intercollegiate Studies Institute on July 23, Vance lambasted the “childless left” who have no “physical commitment to the future of this country,” citing Vice President Kamala Harris, Transportation Secretary Pete Buttigieg, Sen. Cory Booker, and Rep. Alexandria Ocasio-Cortez.

In another interview, Vance reasoned that these Democratic leaders “want to take our kids and brainwash them so that their ideas continue to exist in the next generation.”

To encourage more Americans to form families, Vance has suggested passing policies similar to ones that autocrat Viktor Orbán has instituted in Hungary, which include tax breaks to families with multiple children and family housing subsidies.

In an interview last year with podcaster and men’s group leader Jack Murphy, Vance suggested that the right “seize the institutions of the left. And turn them against the left.”

In the interview, Vance also suggested that if Trump were to win the presidency again in 2024, he should “fire every single midlevel bureaucrat, every civil servant in the administrative state, replace them with our people. And when the courts stop you, stand before the country, and say—quoting Andrew Jackson—’the chief justice has made his ruling. Now let him enforce it.'”

“Indigenous Peoples’ Day” is a fake holiday created to sow division. Of course Joe Biden is the first president to pay it any attention. https://t.co/zyP18KJmy5

Saying that he “didn’t care what happen[ed] in Ukraine”

In February, during an episode of Steve Bannon’s “War Room” podcast, Vance said that he cared more about the security of the US southern border than the Russian troop build-up near Ukraine.

“I gotta be honest with you, I don’t really care what happens to Ukraine one way or another,” Vance said. “I do care about the fact that in my community right now the leading cause of death among 18-45-year-olds is Mexican fentanyl that’s coming across the southern border.”

A former marine, Vance also implied that the reason the Biden administration wanted to “to go and fight Vladmir Putin” was that Putin “didn’t believe in transgender rights.”

Five days later, Russia invaded Ukraine, displacing millions of people and thrusting that country into a state of catastrophe.

Claiming the Biden administration was purposely flooding the US with fentanyl

In an interview with Jim Hoft, the founder of far-right blog the Gateway Pundit, Vance echoed a conspiracy theory pushed by Tucker Carlson, implying that Joe Biden was purposely attempting to flood the heartland with fentanyl to “punish people who didn’t vote for him.”

Vance says Biden is trying to kill MAGA voters: “If you wanted to kill a bunch of MAGA voters in the middle of the heartland, how better to target them and their kids with this fentanyl .. It does look intentional. It’s like Biden wants to punish people who didn’t vote for him.” pic.twitter.com/5Yoh0CA44z